He was born at Carleton Place Ontario (ON), the only son of Mr. and Mrs. Robert A. Galbraith. He was educated there and at St. Andrew’s College Toronto.

Along with at least two other Carleton Place young men (Stearne Edwards and Arthur Roy Brown), Galbraith went to Dayton Ohio and on 3 November 1915, obtained his private pilot’s licence from the Wright Aviation School there.

Later, in November he signed on as a Probationary Flight Sub-Lieutenant with the Royal Naval Air Service (RNAS). He arrived overseas in December, reported to the main RNAS training establishment at Chingford England, and later was posted to No. 2 Naval Squadron based at Dunkirk, France.

By 28 September 1916, Galbraith had destroyed two enemy aircraft and was awarded the Distinguished Service Cross (DSC) and the government of France decorated him with the Croix de Guerre.

Late in October 1916 he transferred to a new squadron, No. 8, known as the Naval Eight, based at Vert Galand, France, which was formed for reinforcing the Royal Flying Corps at the Western Front.

In November, Galbraith scored another three victories. The last of the three victories occurred on November 23rd east of Cambrai. He attacked single-handed six enemy aircraft. In the fight that followed, he shot the wings off one, drove another down out of control and forced the others to scatter.

For this achievement, Captain Galbraith was awarded his second DSC. Early in December Galbraith was posted to England for a rest.

His next posting was, in May 1918, to 66 Wing in Italy, which was engaged in attacking shipping in the Adriatic. In September 1918 he returned to England and was posted back to 11 (Irish) Group. He was there when the war ended in November 1918.

Galbraith was placed on the semi permanent staff of the fledgling Canadian Air Force as a flying instructor at the School of Special Flying at Camp Borden ON. On the night of 29 March 1921, he was killed in a car accident on a sharp curve in the roadway, not far from Camp Borden. 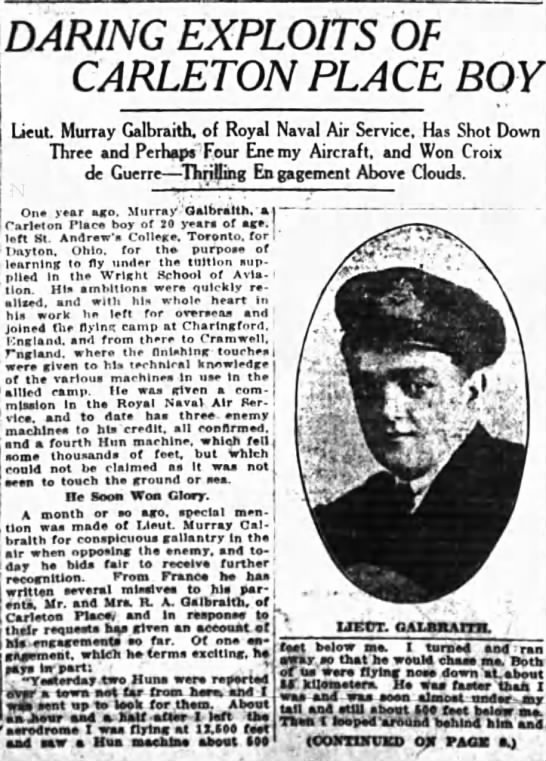