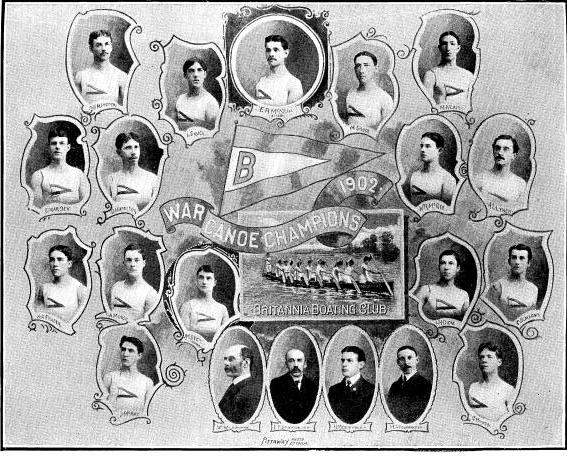 In preparation for  the American Canoe Association Regatta in June of 1902 the course from Nagles Shore to the Lake Park steamboat dock was measured on the ice in March.

Mounting interest in June was noted in the local newspaper by W. W. Cliff, who said :

“There are some thousands of persons who regard the coming Canoe Meet as considerably more important than the new fast trans Atlantic service, or even perhaps the end of the war in Africa.  Doubtless they are mistaken, but the world would lose a good deal if a temporary bias due to the ardor of youth did not exist.” (Howard Morton Brown)

The forces behind the American Canoe Association Regatta reported after the fact that the meet in Carleton Place in June of 1902 should have been cancelled. The races were postponed two days running due to the terrific winds which blew two days and nights and part of the third day. Winds higher than those on the St. Lawrence of the year before played havoc with the schedule of the national regatta held at Lake Park. In the earlier part of one day the press recorded the waves as being higher than any sea. It was one of the worst meets in the ACA history and older residents of Carleton Place said they couldn’t remember a wind of such force that went on for two days.

The visiting canoeists, numbering over two hundred, were said to be the largest group of paddlers ever gathered at one meet in Canada.  They had their tents pitched on the Lake Park grounds and remained there until the completion of the regatta.  Though the wind was very high, on the second day the principle events were completed before nightfall.

The trip to Lake Park was described in the newspapers as not inviting, and local management was not to be congratulated on the arrangements made for all the visitors. A couple of indifferent steam engine boats, some described almost in the condition of a shipwreck, took passengers by the steam route. Those that took the boat ride got a good wetting and many of the ladies were quite alarmed from the trip once they docked. 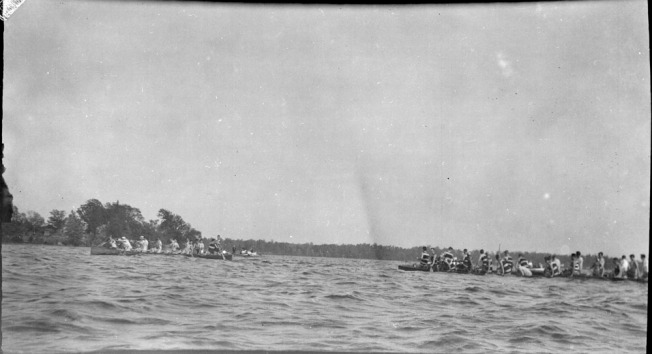 The Ottawa Journal said that every possible old rig in the county took “victims” on a long land ride on a road that was certainly innocent of any good roads movement in Ontario. Several gasoline yachts that had made their way up to Lake Park were compelled to go back or be swamped. Lake Park was deemed useless for canoe racing in a gale.

The management of the meet was most unsatisfactory with executive meetings every 5 minutes, yet nothing was done. The various canoe clubs said the local committee was lacking in knowledge of what would be required, and accommodation in every aspect was lacking. Had Thursday been a holiday over 5,000 more people would have been attended and half of them would have to sit up all night. 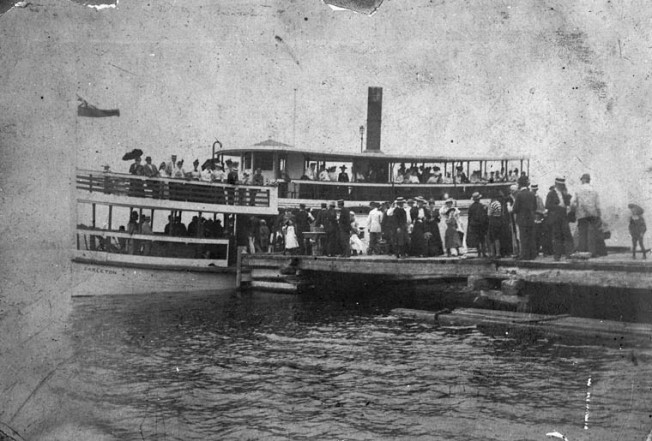 
On the evening of  Friday the 27th the local canoeists entertained the visitors at the Leland Hotel, where a fine spread was laid by host Mr. Salter.  However no one dined before a group of the participants crowded onto the Mississippi Hotel veranda and “with bared heads” sang God Save the Queen. After the tables were cleared Mayor Patterson took the chair and then a ball was tendered for the visitors at the Lake Park Queen’s Royal Hotel, combined with a huge bonfire and a fireworks display.

While the bonfire burned and the fireworks shot across the sky on the last night of the American Canoe Association Regatta there was another ball of fire in view. The Carleton steamer which had its top deck removed by this time docked in front of the Queen’s Hotel was burned to the water’s edge. They say the devil attended the Regatta that year and no one forgot the events for years.

Love many, trust few and always paddle your own canoe.

The summer resort record of Lake Park, central site of  the early Canadian Canoe Club Association and Northern Division regattas goes back over 100 years. In its days Allan’s Point, and for many years later, was a favourite location for the aquatic outings and sport days of Carleton Place social organizations. It’s first small two- storey summer hotel was built in 1887. The Lake Park Company of Carleton Place Ltd. completed most of the existing lot and street subdivision of the community in 1893. To serve it with transportation the company built the Carleton ­ which was the lake ’s largest steamboat, an 80- foot double decked paddle wheeler.

Don’t Be Scared Ladies –Steamers on the Mississippi