Women Gave Police Lots of Trouble in the 1800s

The Carleton Place Police – Whatcha’ Goin’ to Do When They Come For You?

What’s in the Back Seat? Another Story of Our Carleton Place Police Force 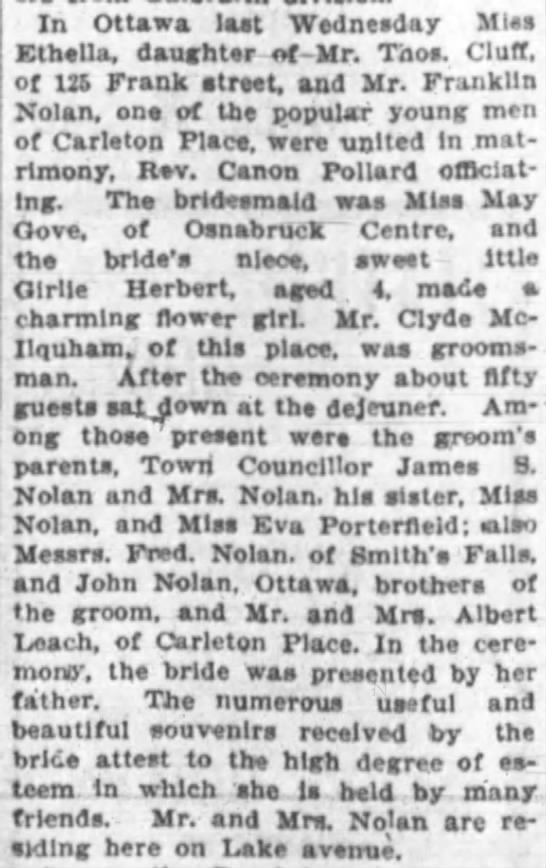 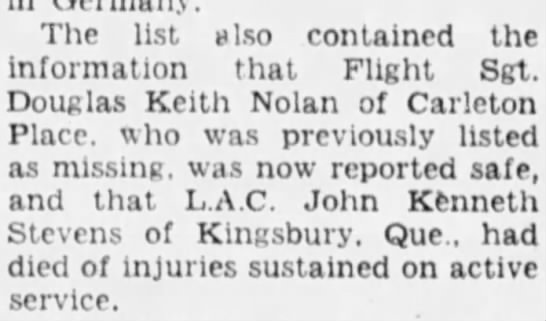 Photo from Carleton Place and Beckwith Heritage Museum–Around 1950 the southeast corner of Lake Avenue and Moore Streets looked like this. Originally the site of W.A. Nichols’ Sons Lumber, it became W & S Building Supplies around 1948.
Mac’s Milk, which remains on the site today (as simply Mac’s), was built in 1988. It was then known as Waugh and Snedden.

I have always believed that the old days of “Help Thy Neighbour”, are never over. At least that was the way it worked out in Carleton Place on March 24th of 1959. That Tuesday what could have been a disastrous fire at the Nichols Lumber and Planing Mill Fast was minimized by the efficient work by the Carleton Place Ocean Wave volunteer fire brigade.

After four hours the fire was out, but the workshop and mill contained a gutted interior with windows gone and the flooring and walls eaten away. Faced with this blow, and with little insurance, Ronnie Waugh owner and recent purchaser of what was Carleton Place’s oldest business sadly surveyed the damage. Thursday followed Wednesday as a nightmare of debris had to be cleared.

Built after the fire– Carleton Place and Beckwith Heritage Museum

Good Friday arrived and a host of good Samaritans led by Stewart Comba, president of the Canadian Legion Branch 192 turned up to help Ronnie. Over 75 Legionnaires and fellow townsmen turned out in their oldest clothes and invaded the fire-scarred buildings. Materials for repair were available from the storage sheds of the mill.  Muscle, ingenuity and skill were also available from the town of Carleton Place.

The volunteers pitched in and the wreckage became beehive of activity. As the church bells in the town tolled, a group of amateur and professional carpenters enacted the Christian doctrine of “do unto others’. Flooring of one-inch hardwood was laid to take the weight of the planing machines being rapidly cleaned and overhauled. Windows that were broken and sagging were replaced, glazed and fitted.

Coffee served up by the young daughters of Mr. Waugh was consumed as the work continued. Again on Saturday the volunteers returned and the walls were repaired and framed in. The machines, newly painted, were set up and placed into position. The band of helpers carried on until dusk even though their wives had already placed uneaten suppers back in the oven to warm.

As I write this it should be described that a lump has gathered in my throat. Ronnie Waugh, the grateful new owner and a man with energy and vision, summed up my thoughts when he said  to the volunteers with a gashed and bleeding hand caused by broken glass during the clean-up.

“They have done in a  matter of hours what money and a bank loan would take weeks to do”.

Ronnie and 10 employees were back at work in what could have been an almost derelict business thanks to the help of many unnamed volunteers and friends. Easter week was definitely proven in Carleton Place as it still does today.

Story of a Locket- Waugh Family

Thanks to Christoper Trotman and family- from their Grandparents that once lived at 244 William st.

Would love to do a story if anyone has any information on the history of the house that began to move yesterday.

Lana Kokaua— It’s has been rented out to different families since we have been next door (10+ years ) and then was bought a couple years ago. Last year the owner of the property proposed a 12 unit apartment building but withdrew the application. I’m guessing due to the number of concerns brought to the town. I’m interested to see what will now be built there. Hopefully whatever is built compliments the neighborhood.

Stephen Giles
I believe this house was built by Mrs and Mrs Lambert, parents of Mrs George Morell (Myrtle), who owned the Burgess home next to the hospital. After that I believe it was Keith MacIntosh (town foreman) and his wife wife lived there.
Kim Martin Elder– Keith and Orpha MacIntosh lived there for many years.

Some people have asked me what building was situated on on the present Canadian Ggas Bar location. I found this on the Carleton Place and Beckwith Heritage Museum website- Please check out their website as well as their Facebook page.

Their home was called Raloo Cottage and the only picture we have is from 1954 and it was owned by Captain William Henry Vickers Hooper and his wife Mabel.

Invitation
(1994.17.12b)“Come to the Irish Tea”!
Mabel Hooper sent this Irish clover shaped invitation to her neighbour Bertha Schwerdtfeger, inviting her to a Ladies Aid tea. Mabel was married to decorated war hero Captain William Henry Vickers Hooper, and lived at the corner of Bridge Street and Lake Avenue.

The Photos of John Armour

Did You Know About the Leech School in Carleton Place?

For those who haven’t heard of them, shadow people are human-like shapes seen by people anywhere, any time. They are usually seen first in the peripheral vision and then when one turns his head, these figures disappear or disappear as soon as they realize they have been seen. They are also quite intriguing because they can be seen in cemeteries (often) and people’s homes (modern homes without histories), outdoors and in hospitals. As ludicrous as these descriptions sound, it gets even more eerie when people report that they are so black that they seem to suck the very light out of the spot in which they stand, as if they are solid.

In the 1930’s people claimed the house on Lake Ave East in Carleton Place was so haunted that children were afraid to walk by. It is such and innocent and beautiful home– what could have been wrong? After talking to someone who does not want to be named, I maybe have an answer.

The children that passed by on a daily basis going to school saw what a lot of others did not see. They were called Shadow People. As a 6-year-old child he began to see seeing dark black shadow people walking around inside and outside the home. He also also claimed someone would poke him as he walked by and it hurt. Other children said the same thing and would cross the street so they would not have to walk on the same side of the street as the house.

Shadow People” are dark, transparent and fleeting.  From the stories I’ve read, it’s not uncommon to read that they killed themselves, were in a car accident, were the victim of a homicide, or some other pre-natural death. Even small children who were able to speak to Shadow People said that the reason they were still here is that, “They can’t go to heaven.” In other words, stuck in this lower vibrational realm.

Some Shadow People don’t want to leave until they feel something here is resolved or they are too attached to a person or place. All spirits do have more than one opportunity to move on so it’s a matter of time before they do, with or without our help. They range in color from black, to grey (most often), to white. Some said they appeared in the edges of their vision, and then when they tried to focus on them, they literally run away. The man in question said he thought one followed him home one day.

“I was 10 years old, in fourth grade. I awoke with a chill on my feet. Moved a bit to warm myself up, but it didn’t work. I sat up and looked in front of me. There I saw a shadowed figure, the felt and saw the presence of a man. The energy I got from him was sorrow. I was petrified from fear, and masked by sadness. I looked back at the end of my bed and he was gone.”

The explanation we get from skeptics and mainstream science – and who are usually people who have never experienced the shadow people phenomenon – is that it is nothing more than the active human imagination. Was it their minds playing tricks on them… or was it therefore their eyes seeing things in a fraction of a second that were not really there – but merely illusions?

There are a lot of questions about why we’re seeing shadow people as more of a modern phenomenon. One theory that is interesting is that our eyes are used to looking at screens that refresh at fast rates of speed and that perhaps we have retrained our vision to see things in the spectrum we didn’t see before.

When the Psychics Came to Town– Madame Monsuer