Years ago I used to love reading the bathroom walls of “The Laff” on York Street when I frequented there. I had no idea about the history nor did I care. Same goes with documenting Carleton Place history. I never thought local hotel magnet Mr. Peter Prosser Salter ever went beyond the Carleton Place town lines. It goes to show you to never judge a book by its cover, or a hotel for that fact.

Over the years history has known The Layette at 42 York St. as Grant’s Hotel, The Exchange Hotel, The Bodega, The Salmon Arms, The Johnson House, and The Dominion House. In 1936, it finally became the Chateau Lafayette and if you have never been there I would suggest you visit for a spell or two or three.

The Laff has had a reputation as once a brothel and rumours of John A. MacDonald frequenting the pub when visiting. It’s also been tossed around that a young Queen Victoria once walked on those very floors, and one wonders if one her signatures or comments is still in one of those ladies bathroom stalls. Hold on… Queen Victoria was said to have never visited Canada, so was it fake news from newspapers gone by? Or– were her many children that visited mistaken for her highness?  One thing that is quite clear: there was lots of drinking and talking going on in Ottawa and probably a lot of click bait in newspapers.

But who knew a Carleton Place man was going to become part of its history?

Photo of the Queens Hotel/ Chatterton House etc. on Bridge Street. Chatterton House Hotel guest register dating from 1886 to 1889 was transferred from the City of Ottawa Archives Photo from the Carleton Place & Beckwith Heritage Museum

In the late 1880 the once McIntosh Hotel on Bridge Street in Carleton Place was bought by Peter Prosser Salter who doubled the size, and renamed it the Queen’s Hotel. It was flipped in 1882 to the widow Mary J. Chatterton who allegedly ran a house of ill-repute and by 1886 she had sold it back to Peter Salter.

Salter ran it until about 1890 when he sold the business back once again to Mrs. Chatterton. Mrs. Chatteron wasn’t poor by any means and owned much local real estate due to her “lucrative business practises”, but it seems she sold it back to him a few more times.

On the 20th of October 1899 it was noted in the local newspaper and the Ottawa Citizen that Mr. Salter, proprietor of the well known Queen’s Hotel in Carleton Place had disposed of the property, with Mrs. Chatteron once again being the purchaser. The price was noted being up into the double tens with five digits.

On November 7, 1900 the Ottawa Journal reported that Mary Chatterton still had the complete management of the Queen’s Hotel. There was no word if the alleyway business re-opened, or why Salter and Mrs. Chatterton seemed to be playing real estate ping pong with the Queen’s Hotel through the years. Was it for tax purposes?

Before going to Ottawa Peter Salter bought and reopened the Carleton House, the oldest two storey stone building in Carleton Place in 1900 after his final sale with Mrs. Chatterton.  He renamed it the Leland Hotel and it still stands today as the office of MP Scott Reid.

This is a picture of the Queens Royal Hotel, built by Peter Prosser Salter in 1899 and was part of the Lake Park Resort just outside of Carleton Place- Carleton Place and Beckwith Heritage Museum photo

A two story hotel was constructed along the Mississippi Lake in 1887, and it was later rebuilt after a fire as a luxury four-story facility by Peter Salter. It offered white linen service, room service, sandy beach, panoramic view of the lake and a number of modern conveniences – running water, private bathrooms, etc.  It was the hub of a busy summer resort and attracted crowds from the town and from Ottawa for fine dining, dancing and even horse racing on the custom built track as Salter had many prize horses and loved to win and see his name in print.

Salter had owned at least three hotels in Carleton Place: the Queen’s Hotel in the late 1800s, the Leland Hotel from 1900 to 1904, and Lake Park Lodge which was called the Queen’s Royal on Mississippi Lake until 1926 when Mr. Larson bought it and added the famous Queen’s Royal Smorgasbord. 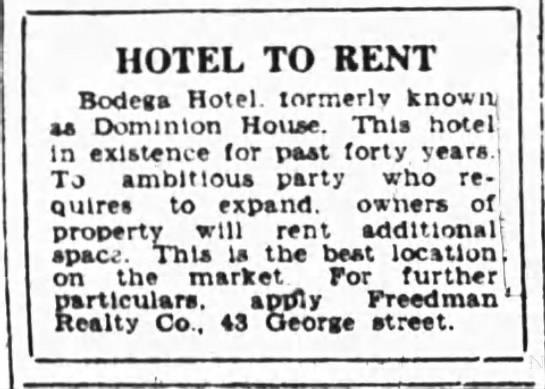 In 1936 Peter Karson had heard that a small lucrative hotel, the Bodega, at 42 York St. in the Byward Market, was for sale — cheap. Its owner, former Carleton Place resident Peter Salter, was in his 80s by now and a familiar sight around Ottawa in his horse-drawn carriage, carnation in his lapel and a beautiful woman beside him.

The three Bouris boys from Ottawa (Mike, John and George) had gained enough experience by 1936 to go into business for themselves. A little short of capital, they were helped financially by their former employer, Peter Karson to buy the Bodega.

Lost Ottawa  The block on the left is where you find the War Memorial now, but it was once popular for the Queen Restaurant and the Bodega. LAC has the original Topley photograph (MIKAN 3325939)

Digging in the newspaper archives after seeing the sale of the hotel I found out that Peter Salter had not only owned the Byward Market hotel,  but he had  actually owned TWO Bodega Hotels in Ottawa. The first hotel, Bodega Chamber, was near the Parliament buildings on Wellington. It was advertised as the most complete private hotel in the city with European and American plans. The hotel was patronized by the leading Members of the House of Commons and had “Incandescent Light” throughout the 36 rooms. However, a notorious second one was opened in the Byward Market later in 1909.

Bodega– Byward Market was never known as a luxury hotel with impressive guests, and was never a prize hotel such as the Bodega Chambers. This Bodega Hotel was known in the media as “the bucket of blood”  in Ottawa for its problems and rowdiness.

The York Street establishment was as a place for the local farmers and their families to ‘camp out’ after hours, and the rest of the regular clientele was the riff raff of Lower Town. ( It was actually called Upper Town in those days)

You had your loud and obnoxious lumbermen, and your typical drunks, and a bouncer called Lucien Leblanc who weighed in at 350 pounds and was called  “Moustache.”

Peter Salter had decided to open up what was to become known in years to come as The Chateau Lafayette because his first hotel, the Bodega Chamber was expropriated. The Bodega Hotel at 34 Wellington ( where the War Memorial now stands) was a popular drinking spot and, most likely, a house of ill repute the same as the Queen’s Hotel in Carleton Place.

When the electric trams began running from downtown Ottawa to Britannia-by-the-Bay, it was a favourite haunt of the military band members who gave concerts Sunday afternoons at the west end park. No matter how popular it was Prime Minister Mackenzie King wanted it shut down as he wanted a grand approach up Elgin Street to Parliament Hill

In 1928, the Bodega Hotel on Wellington closed and in 1929, Peter Salter opened a new version of the Bodega Hotel in one of the Byward Market’s oldest buildings on York Street now known as “The Laff”. It was reported in the Citizen that Peter Salter, with his boutonniere and many beautiful female companions, was at the helm once again.

This was the same hotel that the Bouris brothers bought in 1936 after it being for rent for two years, renaming it the Chateau Lafayette. They hoped the name would appeal to the French-Canadians of the Byward Market.  It had 34 rooms, each with its own sink and at either end of the halls were a shower and toilet.

Prostitutes once again plied their trade here with men who registered with phony names and the Bodega had long-term residents too.  Even after it was sold Peter Salter remained and became the night manager for awhile and lived at the hotel until his death in 1952.

It goes to show you when you least expect it history surprises you with facts no one knows and that is why it is so important for us to keep finding and sharing these stories from the past.

Mr. Salter from the Queens had an Accident 1932