Chris wrote the following to me yesterday:

I have in my possession an old bright red blanket with the label Clyde Reg’d Clyde Woolen Mills. Do you have any info about this blanket? I can’t find any other information on the internet. Any help would be greatly appreciated. Thanks 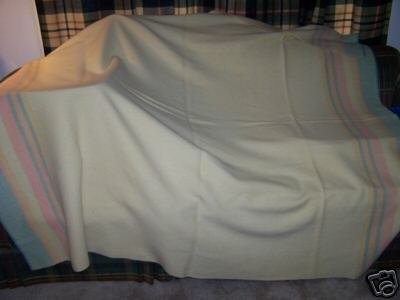 Until the late 1990s, the major employer of the village of Lanark was the Glenayr Kitten Mill, which produced clothing and offered their products at several factory outlet stores. This old woollen mill property was first developed by the Clyde Woollen mills in the 1850’s and a fire destroyed much of Clyde Woollen Mills in 1913. The textile industry lasted for about 170 years, but was finally defeated by the flood of cheap Asian textiles into North America. 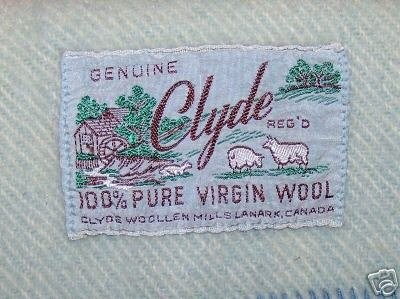 Peter Scott was superintendent of the Clyde Woollen Mills years ago and in Fibre & Fabric: A Record of American Textile Industries in Volume 20 it was recorded that he went back to Scotland where he was making a study of a woollen factory to bring information back to the village of Lanark.

It should also be noted that when Boyd Caldwell died in 1888, his mills, then run by his sons, sawed millions of board feet annually and his descendants included the owner of the Clyde Woollen Mill in Lanark village.

Anyways Chris, your blanket is definitely an heirloom, and I found a blanket similar to yours that sold on EBay in 2007. No selling price is mentioned.

Down by the Old Kitten Mill

A Postcard to Caldwell’s Mills

Once upon a time Lanark Village, Ontario was the place to go on weekends when you wanted to enjoy a lovely Saturday or Sunday.  It is, and was no different, than the small town that you and I grew up in– except it had the Kitten/Glenayr Factory and outlet shops that once attracted thousands of people to the picturesque village.

Photo- Linda Seccaspina
The village was first settled in 1820 by Scottish immigrants who named it after the town of Lanark in Scotland. It soon became a major hub for the lumber and textile industries, both of which used the Clyde River. It runs through the village, as once a source of power and as a transportation route to move logs east to the Ottawa River.

Until the 1990s the major employer in the village was the Glenayr Kitten Mill which produced clothing and offered their products at several factory outlet stores in the village. Dave Markle started the Glenayr Knitting Mills in 1935, and in 1940 he purchased the Munro Mill in Lanark which at that time only had 12 employees.

in 1953 the mill was the backbone of Lanark, and some still called it the Clyde Woolen Mill. Markle made lots of improvements in the old grist mill, with new machinery now making men’s woolen socks, blankets, and motor rugs. In 1945 the Markle brothers bought the large two storey stone building on the main street by the Clyde River and used it as a store. It also housed the former bank of Ottawa and after that the Nova Scotia bank.

The main part of this stone structure was built by Boyd Caldwell as a general store in 1860, and enclosed somewhere in that building is the original store built in 1850. Allie McIntyre was once the manager for many years and said the store once had carried over $30,000 of stock. T.B. Caldwell carried on the business until 1909 and then sold out to W.J. Robertson. When Robertson died the business closed.

Markle installed knitting machinery and they made fine quality men’s wear and ladies sweaters. The key man at the Glenayr Mill was Tom Kear who had learned the trade in Toronto. It now had 125 employees and in 1943 they began knitting sweaters and made colourful ski sweaters under the Hudson’s  Bay brand. The mill worked at full capacity to turn out those famous Kitten cardigans and pullovers For a time both mills operated until the original plant was closed and attention was focused on the mill located in the heart of the village. In 1982 the company was still purring and Mr. Markle took over the former 5 cents to a dollar business to open yet another store.

The Kitten Factory  at one time had a payroll of over $200,000 that turned over three times in local businesses before it left the village. In 1984 the Kitten Mill employed 200 people and had a sportswear plant in Toronto. Seventy-five of those 200 employees had been with Markle for over 25 years. His son Derek was superintendent in the Lanark Mill,  and all the fabric was made in the Lanark plant. They also used to clear out the excess inventory through their store.

The textile industry lasted for about 170 years, but was finally defeated by the flood of cheap Asian imports into North America. After the Kitten factory closed in 1992 the town just was not the same and one by one the businesses closed down, and now it’s just a shell of what it once was. The Kitten Mill was no frills; no fuss; just good, sturdy value at a fair price. As Lynnette Stanfield said,

“I had been led to believe it was just for “the old dears” taking the constitutional drive to Lanark and stopping for tea at the tea room – but I soon learned there was gold to be found!”

When did it all end?

When did the innocence stop?

Dying villages give way to the urban areas where memories are few. Huge box stores are replacing the mom and pop shops in small towns where no one knows your name when you enter the store. It is a time now when people want it all, but if they stopped one second and remembered a passing memory maybe they wouldn’t want it anymore. Then maybe small towns and villages wouldn’t be dying by the second. 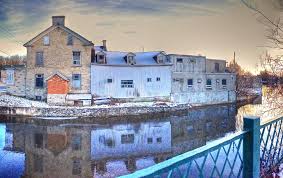 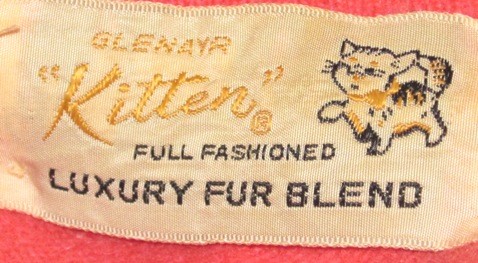 Earl Donaldson–
Great story . My uncle spent his whole working life as Mr Fix It there . He set his own hours and could weld and fix anything . Tom Kear never got the credit he deserved , for keeping the mill running . Wages were not high , but nobody was chained to their position . Numerous others who worked there , deserve a lot of credit . My mother even worked there thanks to Tom Kear . Made me feel proud , while in Nottingham England in 1963 , saw an item in a shop window , displaying a ladies sweater made by Glenayr Kitten Mill Lanark Ontario Canada . The mill is now an eye sore , and the middle of it is about to collapse . Those were the days !

The village was first settled in 1820 by Scottish immigrants who named it after the town of Lanark in Scotland. It soon became a major hub of the lumbering and textile industries, both of which used the Clyde River which runs through the village, as a source of power and as a transportation route to transport logs east to the Ottawa River.

Logging has continued, although in a much reduced manner. Wood is harvested chiefly for the pulp industry or for firewood. In 1959 a major fire destroyed many of the main commercial structures and a number of homes in the village’s centre. Most buildings were inadequately insured. Replacement buildings are highly functional in their design. The village has the Lanark and District Museum featuring exhibits of local history.

Until the late 1990s, the major employer in the village was the Glenayr Kitten Mill, which produced clothing and offered their products at several factory outlet stores in the village. Several of the buildings are still known by their numbers (e.g. Kitten Factory #1) to local residents. The Clyde Woolen Mills was the founder of these properties.-Wikipedia