Came across this in a newspaper. I didn’t write it but another Mike Doyle did. Thought you might like it (or you probably have seen it).

We had a really ‘mean’ Mom

While other kids ate candy for breakfast, we had to have cereal, eggs and toast.

When others had a Pepsi and a Twinkie for lunch, we had to eat sandwiches. And you can guess our mother fixed us a dinner that was different from what the other kids had too.

We were ashamed to admit, but she had the nerve to break the Child Labor Laws by making us work. We had to wash dishes, make the bed, learn to cook, vacuum the floor, do laundry, and all sorts of cruel jobs. I think she would lie awake at night thinking of more things for us to do.

She always insisted on telling the truth, the whole truth, and nothing but the truth. By the time we were teenagers, she could read our minds.

Then, life was really tough. Mother wouldn’t let our friends just honk the horn when they drove up. They had to come up to the door so she could meet them.

While everyone else could date when they were 12 or 13, we had to wait until we were 16.

Because of our mother, we missed out on lots of things other kids experienced. None of us have ever been caught shoplifting, vandalizing others’ property, or even arrested for any crime. It was all her fault.

Now that we have left home we are all God-fearing, educated, honest adults. We are doing our best to be mean parents, just like mom was.

I think that’s what’s wrong with the world today. It just doesn’t have enough mean moms.

(Found this in a newspaper, but it wasn’t written by me, but I wish I had. The other Mike Doyle had a tough life too!)

My Journey to Become the Future Queen Mum of England

In Memory of Silver Cross Mothers — thanks to Stuart McIntosh

Who Are These Mothers? — 1970’s Picnic Carleton Place or Almonte?

I will Wash Your Mouth Out with Soap!

Today’s Child is a monthly photolisting feature published in the Toronto Star. It is a Ministry of Children and Youth Services program, supported by AdoptOntario™.

As a child-focused recruitment strategy, Today’s Child is intended to help raise awareness about the need for permanent families for children in foster care while also seeking a family for a specific child.

All Today’s Child publications in the Toronto Star must be approved by an adoption officer of the Ministry of Children and Youth Services, Private and International Adoption Unit, and a designate from the Communications Branch of that Ministry. The Toronto Star editorial department reserves the right to edit the profiles as some privacy laws dictate how a child is presented and may also dictate the wording that can be used to describe a child. AdoptOntario clinical coordinators work with the ministry staff to complete the column each month.

Newspaper Columns of the Past- Today’s Child- Helen Allen

Sad Memories of the Waifs and Strays Society

Clippings of the Barnardo Home Boys and Girls

Lily Roberts of Drummond The Rest of the Story

Some time in the 1850s somebody somewhere in Canada started the idea of “Penny Readings.” The idea was to provide educative and healthful amusement or entertainment for the people of the towns, villages and purely rural districts. As far as can be learned the idea was brought to this country from England by a new arrival.

Anyway, the Penny Readings idea took like wildfire. They became organized in every hamlet. They were started in Bytown and from Bytown they spread to the surrounding country and soon every second school-house in Lanark County was having its penny readings.

The average penny reading consisted chiefly of songs, recitations and addresses. Most of the people liked “recitations” the best. This liking led to the production of a whole flock of budding elocutionists. Lanark Country people took to the Penny Readings because it provided the only entertainment they had outside of the occasional dances that were staged.

As a rule the Penny Readings were quiet affairs, but now and again the small boys caused trouble. Mr. Alexander was a small boy at the time, but of course it is not to be assumed that he was one of the boys concerned. Because of the fact that the small boys were, as a rule, restless during the proceedings, the people who ran the readings decided not to let them in any more. That was where they made an error.

The kept out boys had to find some mischief to do, so they decided to annoy those inside all they could, They knocked on the doors and walls and yelled like Irish Banshees. In self defence the parents appointed “Hickory” James as guard. He was known as “Hickory” because of his strength and agility and took up a position just inside the door.

When the boys got troublesome he ran out, caught one or two of them (when he could) and flailed them. In reprisal the boys planned revenge. As soon as the next gathering had started they quietly piled fence rails and boughs of trees against the door. Then they rapped on the building and yelled like the dickens. “Hickory” James threw the door open quickly. The fence rails and things fell in on him, causing a ruckus in the hall.

After the meeting the parents held a conference and decided that it would be better to let the children in than have them annoying the meetings in the manner in which they had been doing. So at the next gathering the doors were thrown wide and the boys were let in. But they were scattered amongst the others so that an eye could be kept on them After that things went all right.

Question: Do picky children become adults with infantilized palates whose restricted tastes will make for a duller culinary world?

Being picky is now being taught, are parents to blame?, is it the restaurant and the competitive marketplace that make businesses  bend over for picky and choosy eaters who believe they can change the menu options to suit their liking, is society to blame for creating a generation of entitled assholes….

For a generation, many North American parents have indulged children’s picky eating tendencies by sticking them in an endlessly repeating loop of chicken fingers, burgers, pizza, plain pasta, mac and cheese, and grilled cheese sandwiches. Anyone who has sat down for a meal with youngsters over the past 25 years will recognize this list of typical “kids’ foods.” Pushed out of the picture, to varying degrees for different children, are fruits and vegetables and anything else that might challenge them, from spicy delicacies to unfamiliar proteins.

I feel that the less meals that are cooked at home and  the meals that consist of microwaveable pre-cooked crap the more likely that a person grows up no knowing how to cook anything more than the simplest of items. It is a shame and I believe that makes the masses become more lazy with their food choices and thus in turn more picky when dining out.

Mealtimes for children were quite different just a few decades ago. As a general rule, people who grew up in North America and are now over the age of 30 recall that when they were children, kids ate what the adults ate. Families usually dined together at the table. There might have been foods you didn’t like; depending on the rules of the house you might have been expected to try them or even finish them.

With the advent of countless convenience and snack foods, from pre-cut fruit that won’t spoil, chicken nuggets pressed into “fun” shapes and food items changed into more suitable colors to foods kids could assemble themselves,  have helped transform the landscape of how food was perceived and help kill the traditional family dinner  even grocery stores have increasingly sold meals that resembled fast food many of them portable and/or frozen and have ready to go hot  dinners.

The war has not been lost, we can change the way we perceive foods as a whole. A few pieces of advice I read are:

Sit with children and serve them the same meal you get. Serve them challenging foods and encourage them to eat, but don’t force them. Fighting about it can create negative associations for that food. Listen to kids’ ideas about what they want to eat, but don’t turn the menu into a point of negotiation once dinner has been decided upon. Involving children in food preparation sharpens their appetites, so involve them whenever possible in grocery shopping and gardening, and let them watch you cook!

Thanks for reading but…

Enough of my opinion, Jamie Oliver called and he wants his rant back!!

My little bakers assistant helping me kneed the dough

In action with her first ever homemade bread dough

Want to be a Food Network Star?

The Soups of Summer — Dr. Dusty is in the House!

Every night at 5 in 1961 I would watch the CBC TV show Razzle Dazzle hosted by Suzanne Somers’ husband, Alan Hamel. I had entered a writing contest and was eagerly waiting to hear if I won a pen with my “meatless meat pie” essay. A few weeks later I found out that I had indeed won a Razzle Dazzle pen for my story. It’s just what we did in those days. We had pen pals, and we wrote letters everywhere to try and win prizes. At least I did.

I have been reading your column for several years and I find it very interesting. I especially like the puzzles, but the letters are interesting too. I am 13 years old and my birthday is March 13th. My hobbies are stamp collecting, reading, and sports (skating and swimming). I have two sisters and two brothers. Wendy  is 9 years old has her birthday on February 18th and would like to join the club too. Susan is 8 and her birthday is August 8 would like to join also . Can you send us three pins?

We live on a farm near Carleton Place. The Mississippi River is just two hundred yards from our door step, so we go swimming every day in the river. When it turns cold we skate on the river too. My brother is also interested in magic tricks, so I am wondering if you could send me a leaflet on different tricks and how to perform them

Of course Uncle Ray wrote back and told Patsy it must be nice to live by a river, and to make sure the ice was thick enough to carry them if they went on it in the winter. He sent them each a pin and said they were now proud members of Uncle Ray’s Mail Bag Club as well as a leaflet for magic trick instructions for her brother. He hoped one day they would become efficient magicians. 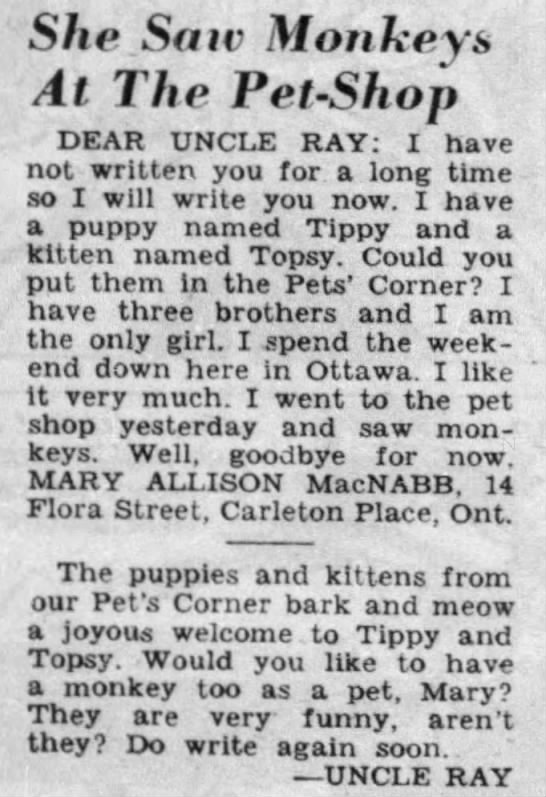 Llew Lloyd SAID: Patsy Williams,(she prefers Patricia ), wrote a column for The Daily Commercial News for years . She was still writing , but for a different construction oriented publication when I last met her at an Ontario Road Builders Association approximately 8 years ago.

A parody of Uncle Ray– if you offend easy, don’t watch it