It has been a long time now since this little item happened. But it was back in Almonte around the latter 1800s likely. The old town had two’ famous school principals. One of course, was the redoubtable P. C. McGregor, patron saint of Queen’s University at Kingston, and for many years principal of Almonte High School. P. C. was really something.

My story, however, concerns another principal, the late John McCarter. He was an old dour, stubborn Scot with a single mindedness and a stern approach to life. He held forth in the Church Street School, and he trudged, summer and winter, across the Bay Hill and up Mill Street. John McCarter was a stem disciplinarian aland he did not hesitate to lay on the birch rod at times. His arder in this direction brought him into trouble.

The old man licked a lad named Jack Carney rather heavily, and there was such a rumpus kicked up that the case was sent up to the higher court in Perth. The late E. W. Smith (Almonte magistrate) did not wish to get into trouble with the two principals in the affair, so he wisely sent the case up to the county court.

Mr. A. M. Greig represented School Teacher McCarter, and W. H. Stafford represented Jack Carney. The presiding judge was Judge Senkler at Perth. Carney’s lawyer took a cart load of school youths to witness that Carney took a shellacking. I was not one of the kids, but it was a great day when the prosecuting lawyer took the kids over to Perth. The late Sandy Robinson took his famous side-seater to Perth with his team of steppers.

Twenty two miles was a long trip in those days, and there was a lot of heat generated around town because of the interest in the case. John McCarter had many friends and it would have been suicidal had he lost the case, but because of the youth of the lads, who were keyed up to take their oath re the licking of the Carney lad, the wise old judge dismissed the case. No evidence was taken because of the youth of the witnesses for Carney. Jack Carney’s health was not abated one whit, and maybe it was a good thing for the discipline of the town, but it was hot stuff when it lasted.

When Dugald Campbell was born on May 9, 1886, in Lanark, Ontario, his father, Donald, was 48 and his mother, Christinia, was 41 he lived in Almonte in 1901. He married Sarah Garret Johnston on September 10, 1913, in Vancouver, British Columbia. They had four children during their marriage. He died on August 17, 1973, in Vancouver, British Columbia, at the age of 87, and was buried there.

Do You Remember? 1900 in Almonte — Dugald Campbell 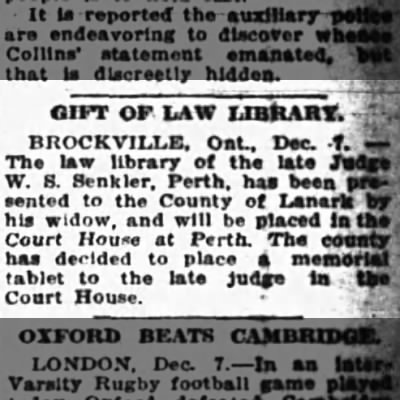 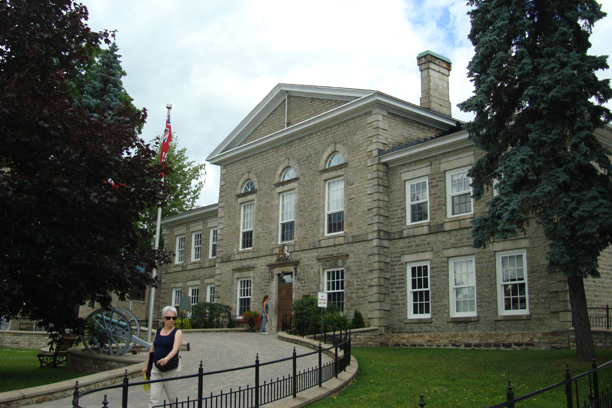 I never realized how much Judge Senkler was a force in Lanark County and how many crimes I had written about that he had presided over the court cases. I could not find a picture of him only Judge Senkler in Vancouver who he has no relation too. But, I did find these tidbits about him.

His Honour Judge Senkler held division court her on Wednesday. There were  a dozen cases on the list, but there was little “fight” in most of them. Auctioneer Simpson sued W.F. Bishop for $100 commission for selling the latter’s farm. The defendant claimed that the plaintiff did not effect the sale. The judge  gave the plaintiff $50.

A young man named Holliday of Almonte was tried on Friday by Judge Senkler for breaking into Max Vineburg’s store in Almonte.  The evidence of a respectable witness who has turned Queen’s evidence resulted in Holliday being discharged.

Mr. Michael Sullivan appeared before Judge Senkler on Tuesday last on the charge of assaulting Ambrose Love by stabbing.  He pled guilty and was sentenced to imprisonment in the county gaol for thirty days, sentence to commence upon conviction for any other felony or misdemeanor.

Jaspar Vrooman, ex-Chief Constable in Smith’s Falls, was committed for trial last week on the charge of being instrumental in enabling another party to obtain goods under false pretenses, came up before his Honor Judge Senkler on Saturday and was sentenced to two months’ imprisonment in the common gaol at Perth. 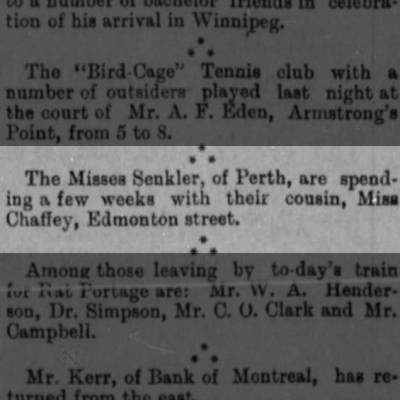 In consideration of the event, one must not overlook the biography of Judge and Mrs. Senkler.  The judge is an Englishman by birth having been born in Doching, Norfolk County, England on 15th Jan., 1838. He as a son of Rev. Edmund John Senkler, M.A. of Cains College, Cambridge, a clergyman of the Church of England.  His mother was Eleanor Elizabeth Stevens, daughter of Rev. William Stevens, M.A., of Sedberg, Yorkshire, England.  The parents of Judge Senkler with their family of nine children came to Canada in May of 1843 locating in Quebec where for some time Rev. Mr. Senkler was a rector of the high school.  Later he moved to Sorel and in September of 1847 he moved to Brockville where he died on October 28, 1872.

Mrs. Senkler followed him to the grave on 16th March, 1873.  The education of Judge Senkler was the care of his father and the future judge commenced life in mercantile pursuits.  With the desire for law uppermost in his mind, he studied with Hon. A.N. Richards, the late Lt. Governor of British Columbia and also with the late Hon. Edward Blake.  He was admitted as solicitor during the Michaelmas term of 1860 and was called to the bar in Trinity term, 1861.  The judge began his practice in law in Brockville first with the late J.D. Buell then with Hon. A.N. Richards and lastly with his brother the late Edmund John Senkler (afterwards county judge at Lincoln) and continued in Brockville until December of 1873 when he was appointed Judge of the County Court and County of Lanark, succeeding Judge Malloch.

Then following this appointment others came:  on the 15th October, 1875, he was appointed Master in Chancery here by the judges of he court; on the 10th October, 1877, Referee of titles by the Judges of the Court of Chancery; on March 14, 1882 local judge of the High Court of Justice for Ontario; and on October 26, 1885 revising office for South Lanark by the MacDonald government.  Judge Senkler has taken an active interest in church, education and military matters.  He has helped to organize the Brockville light infantry attaining the rank of ensign.  True to the traditions of his house, he is a member of the Church of England and served as church warden in St. Peter’s Church, Brockville and St. James Church, Perth for several years.

For 31 years he has represented the Perth parish at synod and much to the regret of St. James Church, declined re-election at their last vestry meeting.  In educational matters, Judge Senkler has devoted much interest and energy.  He is a member of the Board of Education, first representing the county as Collegiate Trustee and since 1892 has been a public school trustee for the centre ward.  He was chairman in 1893 and 1894.  the judge is especially concerned with public school affairs.  His Honor served the town on the public library board being an appointee of the town council and for several years has been chairman.  The marriage of Judge and Mrs. Senkler took place on May 21, 1862 and was celebrated by the late Rev. Dr. Adamson in the Episcopal Cathedral in Quebec.  Mrs. Senkler is a daughter of the late Benjamin Tait of Newboro who at that time represented South Leeds in the Parliament of Canada and who sat for the same riding in the first parliament of Ontario.  The issue of this marriage was two daughters and one son.

“He gave her a drug which kept her in his power”

Photos of Judge Senkler thanks to

I am so pleased to know who he was and I read your article about him. I think he was about 58 when this photo was taken. I can’t seem to find anyone with that surname in the area, so I suppose the chances of finding descendants are vague.

Copies attached of front and back. Also the corner (bubbled with what I presume is old glue when the picture was changed) marking the studio name Bryant in Brockville (no relation 🙂). There is a bit more pencilled in on the back  – Aug. 96, a random number which may be price or size or house number, and a note to deliver Tuesday afternoon.. Carlene Bryant.