1962.. Photo Larry Clark— Memories? Mrs. Bond’s store next to the Mississippi was another great place to visit. Can’t really remember what would have attracted me there, other than the store was packed almost to the ceiling along the walls, and the displays were overflowing with goods. Mostly items of interest to the female population but I’m thinking she may also have sold “candy”?

Of course my memory is not perfect, so there is bound to be confusion regarding the goods being sold.

Joie Bond’s store on the right

Linda HallahanVisited there often for a chat and to find cut out paper dolls as little girl.

Alison BondI had heard once that she lived on Lake ave. Can anyone confirm this?

Danielle Neil–Alison Bond I believe she lived above the store.

Janet KerryLoved going there. Also this is okd as looks like there was still parking on both sides of the street.

Pat HortonUse to go there to buy hair ribbons

Donna Lowe WardShe sold everything. You just had to find It!

John EdwardsShe and her brother, Bunny, (of canoe club fame) maintained a patch of grass and perimeter garden beside the building now paved over.When we shopped for firecrackers

, I thought the immense amount of dry goods piled up everywhere combined with incendiary devices was not a good idea..

Julia Waugh GuthrieIt was always a treat when we got to go there and rummage through for a treasure.

Roger RattrayMrs. Bond had a great assortment of

Kevin LevesqueYup. Firecrackers. We had to sign a page for tracking the purchase. I was Superman that day.

Ray PaquetteMs. Bond also had a great inventory of school supplies and as it was on the way to Central School for many of us, it was a go to store for those “forgotten” items…

Danielle NeilMrs. Melba Barker used to send Janet Barker and me there to get thread, needles, and other small items. Joey was a hoarder but she only took moments to locate anything you needed!

Karen RobinsonShe had good comic books. Bought mine there.

Susan McCuan-HarronWent there to get a quill for a pioneer project for school.

Ruth SawdonRemember the steel bar across the bottom of the window and getting my tongue stuck to it in the winter….. still feel the pain.

Bill RussellBill Lemay I remember Horricks had the Esso across from the bank. The Texaco I remember Rupert St. Jean as the proprietor. Ron Armour had the Gulf station on the other corner.

Peter JoannouBill Russell It’s actually worse than that. You used a US gallon in that conversion (3.78l) instead of the Imperial gallon (4.54l) which was sold here. So it was actually 8.79 cents/litre. Now THAT’s inflation!

Danielle NeilDave Hick was it engraved?There was a coroner or funeral services business just a few buildings up the street over Stewart’s (?) furniture store.

Dave HickDanielle Neil the gravestone was broken in the 50s and taken to the store to be repaired where it got forgotten, gave the stone to Jake Gallipeau who looked after the Anglican cemetery where it was repaired and reinstatedJacob died from inhaling toxic wallpaper paste and was buried with his infant son-inda Seccaspina there is a photo in the Canadian by Jeff McGuire in 2000 I think and a story that he and I researched at the time

Ray PaquetteDanielle Neil The name of the Funeral Director was Fulford, and he was the predecessor of Alan R. Barker. I was a boyhood chum of Billy Fulton whose Dad worked in the business… 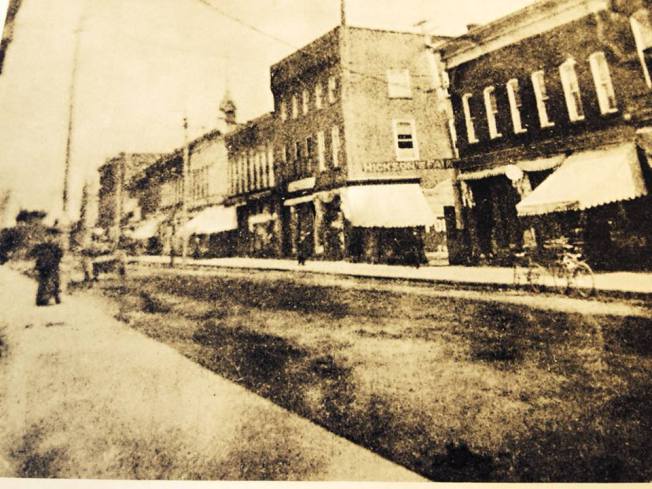 Jennifer Bond Hamilton sent me this story about Joie Bond. As you know I have been trying to gather details about her and Annie Joey Cram. Thanks to Jennifer Bond Hamiltion we have a story. Thank you Jennifer– this has really made my day, week and month…

It is only through sharing that we piece together what once was and should never be forgotten.

Hello, My name is Jennifer (Bond) Hamilton. Gordon Bond was my father, Joie Bond was my aunt, my dad’s sister. The building on the main street of Carleton Place (beside the Mississippi Hotel) housed by grandmother Mimi’s wool/novelty shop on one side, my grandfather Henry’s barber shop on the other side, and living quarters for the family behind and above the shops.

As my grandmother’s health failed, Joie stayed home to care for her and took over the duties of the shop. I remember as a child my twin sister and I having a lot of fun in the “weird but wonderful” shop of treasures. In addition to wool and sewing supplies, at one time the stock also included school supplies, tea cups & saucers, figurines and other novelties. The shop was always a mess but Joie always took great pride in her appearance–dresses, hats, gloves…always neat and fashionable. 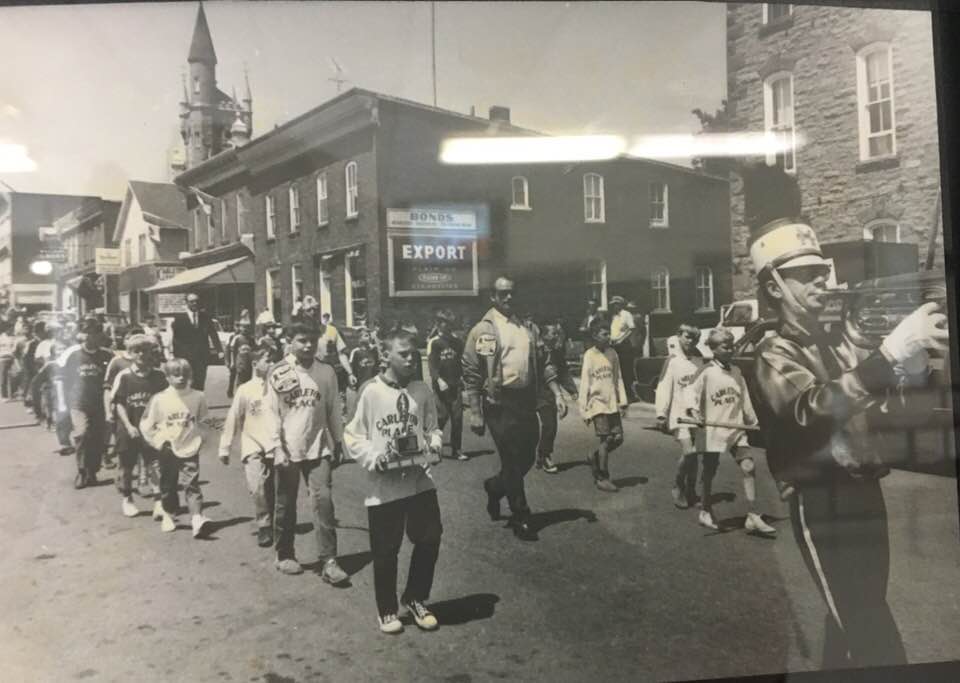 Every Christmas Joie would board the train (always first class in the diner car) and spend a few days with us in Kingston, as did my uncle Tiny (Percy) who lived in Montreal. My sister and I remember that Joie was a little superstitious especially with the color green. Hated it! A little tricky at Christmas when most wrapping paper had some green in it. We learned early on to wrap her presents in red! My parents took her to parties over the holiday season and she loved the social life, a break from her commitment to the shop in Carleton Place.

When both Joie and our uncle Lloyd who also lived in the house became ill and went to nursing homes, my father was tasked with emptying and selling the house on behalf of the family. You can only imagine the task we had ahead of us in Joie’s shop! By then, the late 70’s, the stock was quite depleted but every nook and cranny had some treasure stuffed in it (even little piles of coin here and there that hadn’t made it to the til). It took several months for my dad, sister and I (with baby in tow) to collect, sort, organize … our very own Reality TV show way ahead of its time. Joie was certainly a champion hoarder.

I’m not sure who eventually took the stock, my sister and I each knit a throw; my dad had a couple of local ladies who found homes for some things; much of it had been on the shelves for a long time, was old, dated and of little use to anyone. What I remember most about Joie (from stories passed down by my parents) is that she was once a young woman who had gone off to Business School, was ready to embark on life and likely leave Carleton Place as her sister Peggy had done, but she stayed behind to nurse her ailing mother and support her father. As the years went by she was alone much of the time, often her only social contact was through the shop.

Joie developed a reputation as being quite a ‘character’, a little strange even, especially when she became hard of hearing later in life and often seemed quite ‘out of it’. She certainly operated ‘her’ shop in her own quirky way and even became somewhat of a celebrity in the area for doing it ‘her way’. 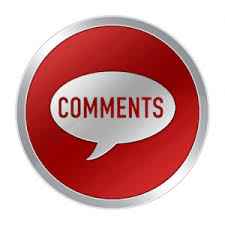 Ted Walsh
My Mom, Barbara Walsh, bought a lot of the leftover yarn, knitting materials, threads, sewing supplies and some of the fabric when Joie closed her shop. My wife inherited half of whatever Mom did not use, and my sister, Lorna Drummond got the other half. Those materials have been used successfully for years and now my daughter has used the yarns for many projects, there was so much of it. We were very thankful to Joie Bond for all those materials.

Author’s Note– And that is why these two women, Joie Bond and Annie Joey Cram fascinate me.. they always did it their way– no matter how others were stuck in their traditional ways. My hat is off to them both. The Carleton Place Originals. 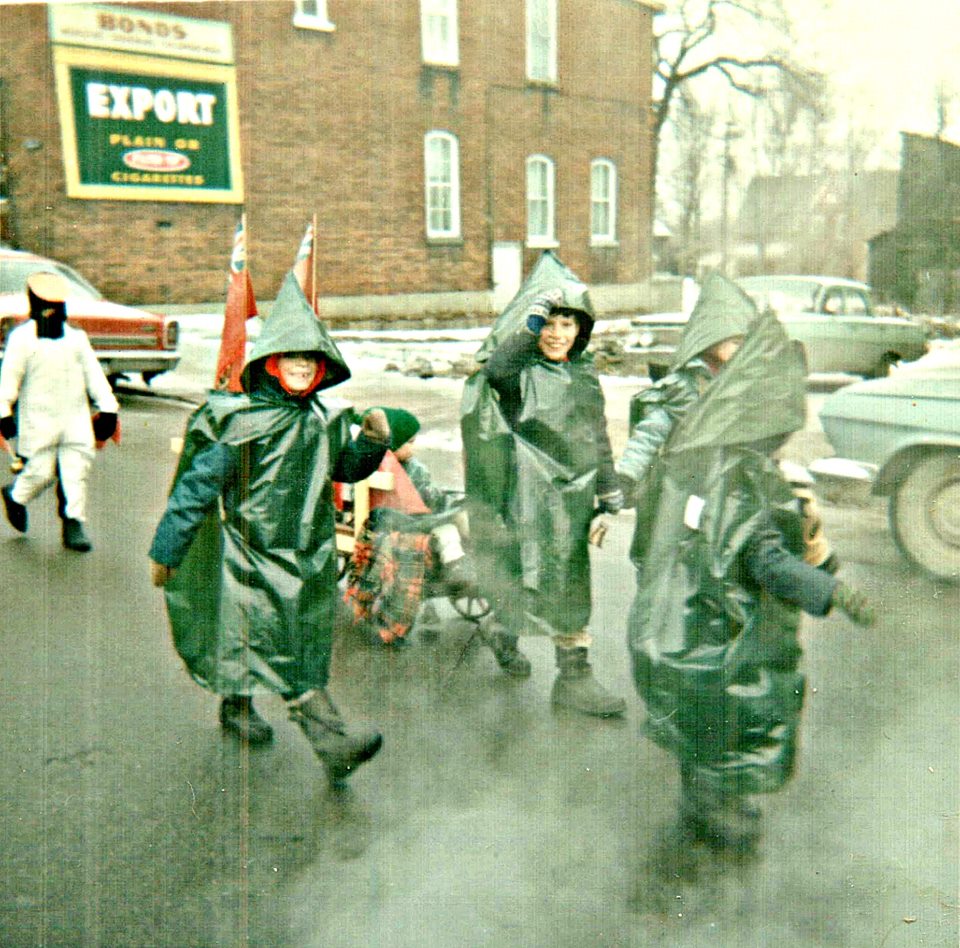 Here’s another picture of the Xmas parade – 1970. The Ford and Dorman kids. Norma Ford– see the Bond sign? Keith Giffin– The brick house in the picture on Beckwith Street was the MacDougall family home. Mrs. MacDougall worked at the hydro office on mill st. Rollie and Ruth were the only children I knew, Rollie lives in Shawville Que. on his family farm.

Looking for information on Joey Bond

Before the Stompin Tom Mural….There Was

Still searching for information on Annie Joey Cram and Joie Donegan Bond.  As you see, and thanks to Dianne Saunders and Stephen Collie, I learned just a little bit more about her. It’s spelled Joie not Joey and all this time I had been looking for Joey not Joie– but in reality it didn’t help much– as after hours in newspaper archives I found nothing

“Stephen’s great grandmother Mary Elizabeth Bond (1864-1954) was the sister of John Henry Bond. John Henry had 7 children and Joie and Henry Lloyd were the two that you referred to. John Henry and his wife Mimi named one of their daughters after his sister Mary Elizabeth ( Stephen’s great-grandmother). Mary Elizabeth Bond-Senior married James Edward Bennett and his son James Henry Bennett was the original owner of Bennett meat Market in CP. We have a record book of their business in CP. James Henry retired and since his son had gone to war passed the business over to his brother Austin”.—Dianne Saunders

At the residence of the bride’s uncle, on August 7, by Rev. John Grenfel, Mr. J. H. Bond to Miss Mina McDonald, all of Carleton Place. 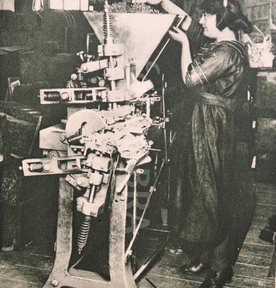 In the 1921 Census of Canada Joie was known as a machine operator and made 600 dollars a year. But no mention is made where she worked. 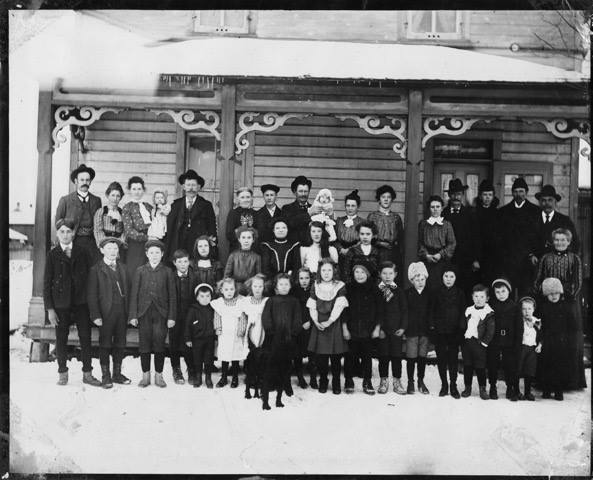 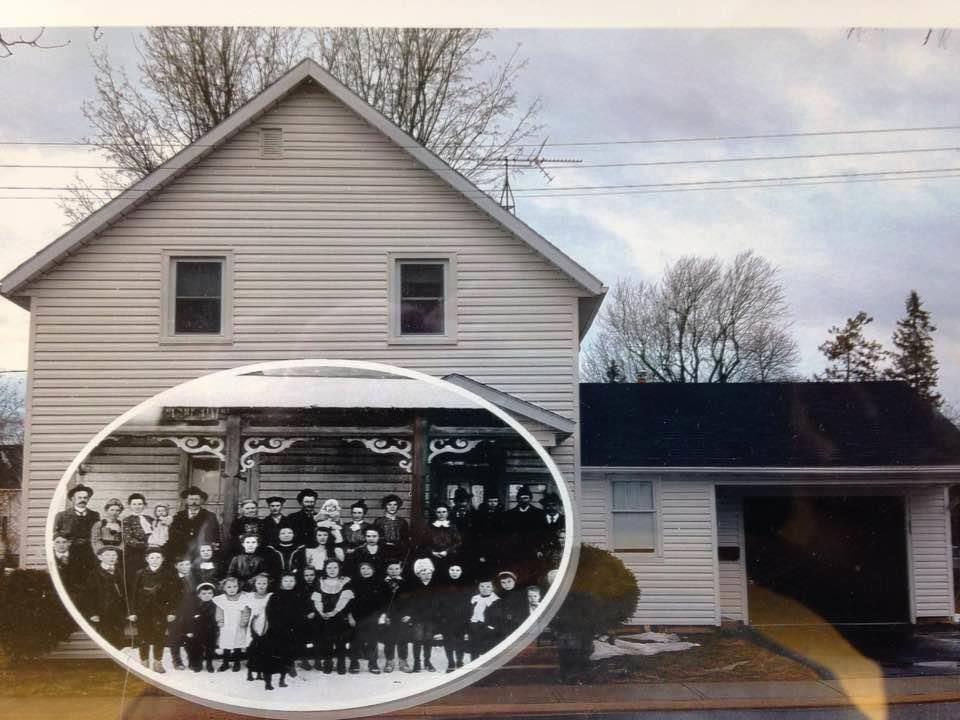 Jennifer Fenwick Irwin The Carleton Place and Beckwith Heritage Museum does have a copy of these photos, as well as this “then and now” montage by David Robertson. 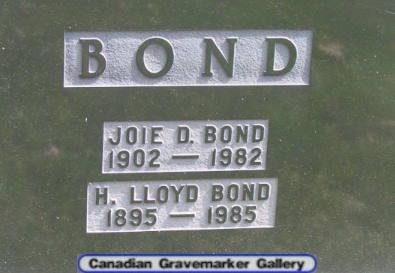 She was a resident at Twelve Acres nursing home in 1973.

This is the Bennett Family Photo from Christmas Day 1903 and the man in the centre holding the baby (my late uncle, Austin [Aunnie) Bennett] was James Bennett my Great Grandfather and a former Mayor of Carleton Place. To his right is his wife, my Great Grandmother Elizabeth (nee Bond)

In the Front Row are the two twins Dorcas and Martha. Not everyone was there, some were away visiting in Munster but to note in the Front Row, 2nd in from left, was my Grandfather Harry Bennett, of Bennett’s Butcher shop. Harry and his wife my grandmother Annie (nee Boyle) lived on Flora Street for years.

The house in this photo still stands on Herriott Street, at the Northeast corner of Herriott and Flora, now clad in white vinyl siding.

Interesting that the climate changed as much in the early 20th century as it does now, coats are unbuttoned and opened, women not wearing coats at all, Dorcas and Martha in their petticoats.

Looking for information on Joey Bond