Photo from Tom Edwards
Author’s Note:
I cannot do this without all of you. I try to document all your comments although it has been slow for me the past few weeks due to the heart attacks– but it’s getting there.:) But, any time you send me something or comment we are recording local history for all those generations to come. I am so honoured to share what you write and comment. Keep them coming.
This note from Tom Edwards made my day this week. Thank you Tom!
Hi Linda
Pretty cool to read and see the article you posted on my Uncle Johnny the other day.
Johnny Erskine was married to Essie Rath. Johnny was my grandmothers brother on my dads side. My dad, John Edwards, was named after his uncle Johnny, and therefore, he was actually my great uncle. I can remember when people drove from far and wide, to get some of Uncle Johnny’s coleslaw at the IGA in Almonte. I can remember my dad taking the family to Almonte when I was a kid, to get groceries at the IGA, and moreso specifically for that coleslaw.

Sometimes if Johnny wasn’t too busy, he would flip my dad enough money to buy us a “Mellowroll” across the street from the IGA, at Petersons Ice Cream. The problem was Uncle Johnny was, shall we say thrifty lol, and he usually gave dad enough money to finance two cones, but there were three of us and it ended up being a nice gesture, but I can remember my dad laughing and saying that each time it would end up costing him money. 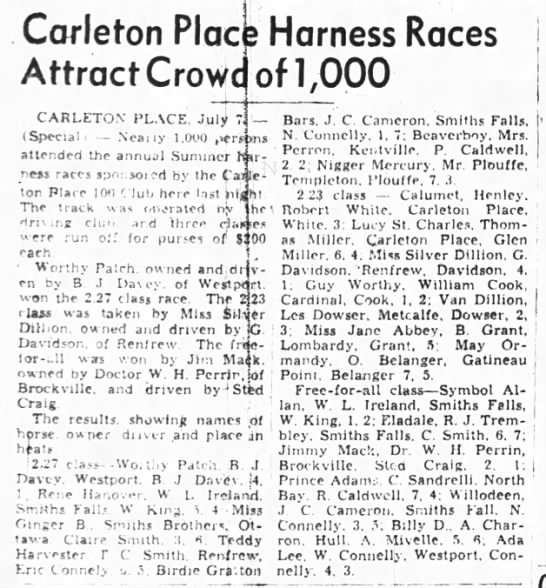 It was around 1982 that Uncle Johnny traded in his 1964 Pontiac Parisienne for a 1982 Pontiac Phoenix. I can remember him calling my mom, (my dad died in 1980), and speaking with her about how crazy the drivers were on Hwy 7. He had taken a drive to Perth with his new vehicle, and he drove 60. LOL His new car was in kilometers, lol not like the old Pontiac, and he just couldn’t believe all the cars that passed him and blew their horn at him.
I have also attached a photo I took of the waiting station across from the store in Clayton. I noticed it last summer and took some photos of it to send to my brother and sister. I have enclosed my photo of it. Just for your information, my Uncle Johnny would be the citizen of the year, Connor Edwards, great, great uncle.

Connor Edwards has been named the Carleton Place Citizen of the Year for 2016. On Friday, Dec. 2, Edwards was honoured for his contribution to the youth of the community, during the municipality’s annual appreciation night, which took place in the upper hall of the Neelin Street Community Centre. Bob and Joan Bennett, the recipients from last year, made the announcement in front of a capacity crowd. Pictured, from left: Joan, Edwards, Bob and Jan Ferguson, the Carleton Place Citizen of the Year for 2014. – Tara Gesner/Metroland
My great uncle Stweart Ferguson would be also an intriguing story. He used to have the stable on High Street at Mary and Glen Millers house across the road from Findlays. I was there many times as a kid. I can remember very well, the horse track they had on High Street out near Hwy 7, and also the track he used to run the horses on on the corner of Bridge and Townline, across from the Town View apartments.

Photo from the Carleton Place Canadian files by the Carleton Place and Beckwith Heritage Museum
I remember as a kid, going to his house on William Street, and him giving me half a dozen ribbons he had won at local fairs. His shed wall was covered with them. I would estimate that he had 3-400 ribbons. He had horses for as long as I can remember. He was also recognized by Rideau Carleton Raceway, and was awarded I believe it to be an Honorary Lifetime Member.
Thank you again, for all your articles. It is a must read every day.
Sincerely,
Tom Edwards

Those horse shows in Carleton Place. Horse races at Lake Park and later on on High Street near Bennetts— click on the photo to read it all.. Clipped from The Ottawa Journal, 11 Jun 1907, Tue, Page 6