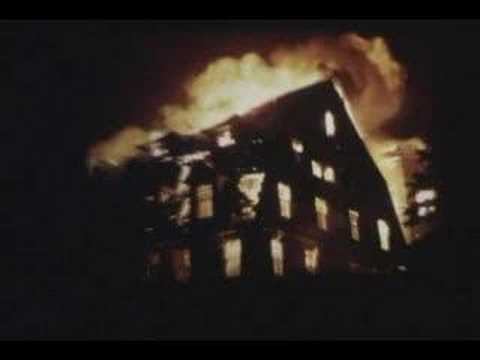 Note: The Bathurst Independent Examiner at that time began to be published weekly in the twelve year old community of Perth.  It appears to have been the first newspaper in the province to be located at an inland point north of the original Loyalist settlements which forty-five years earlier had been started along the St. Lawrence and Niagara Rivers and eastern Lake Ontario.

It becomes our painful duty to inform our readers of the most distressing calamity that has ever been our lot to record—namely of the destruction of a whole family by fire.  It appears that on the morning of Friday last about 3:00 the home of Patrick Connor, in the Township of Lanark , was discovered to be on fire by some travellers who had put up at the house for the night and were aroused by the screams of a part of the family.

They were obliged to make their escape by breaking a window and going through it.  After having gone out they thought of trying to save the family but found it impossible to do so without jeopardizing their own lives in the attempt; and Mrs. Connor, his wife, 5 children and a girl who had come on the evening previous to act as a servant, all perished in the flames.

Various rumours are afloat, some of them very unpleasant, in reference to this dreadful circumstances and it is very difficult to get at the real facts connected with it.  We are informed that the family had gone to bed about 9:00 the evening previous and the newly elected councillor for McNab, Mr. Paris, and some other person, arrived about 10:00.  Mrs. Connor and the servant got up and got tea for them and all retired to bed about 11:00.

The travellers and the servant man, we are told, slept in a room upstairs and the girl and three of the children in one adjacent, which, had the travellers been aware of when they escaped, it is thought that they could have saved them.  The remains of Connor and his wife were found in the bar room.  The place where they slept was off the bar and from the circumstances of their having been found where it is believed they were trying to escape but becoming stupefied of bewildered could get no further.

An inquest was held on the remains if the unfortunate family and young female 8 in age on Friday last before Dr. Holmes, Coroner, when the following verdict was returned:  “That Patrick Connor, Ellen Connor, Thomas Connor, Rose Connor, Dennis Connor, his five children and Margaret Donahue, came to their deaths by fire and that the said fire originated in the kitchen of Patrick Connor’s house situated in the township of Lanark”.

What an awful warning to careless persons to think that when they lay their heads on the pillow at night it may be the sleep of death ushered without preparedness into eternity.

The Bathurst Courier is printed and published in Perth, Upper Canada, every Friday morning by James Thompson.  Terms 15 shillings if paid in advance, 17s.6d. if not paid till the end of the year.  Postage included.  Produce taken in part payment.  Agents at Bytown, Pakenham, Richmond, Carleton Place, Horton, Lanark, Dalhousie, Sherbrooke, Smiths Falls and Merrick’s Mills.

In 1828, John Stewart, a school master of the Bathurst District Grammar School in Perth began the first Ottawa Valley newspaper – The Bathurst Independent Examiner. The Independent Examiner ceased publication in the late spring of 1834. Three months later in August of 1834, John Cameron, a highly respected local doctor purchased the business of Mr. J. Stewart and began publishing the Bathurst Courier and Ottawa Gazette. Over the years, the paper’s name changed, as did its owners until it became known as the present day Perth Courier.