The Late John Menzies
The Registrar for North Lanark Succumbs to His Injuries
– Sketch of His Career – An Active Citizen for 55 Years – Filled Many Public Positions.
Contrary to the general expectations, Mr John Menzies, registrar for North Lanark, did not rally from the injuries he sustained by a fall on the ice here couple of weeks ago. He passed away last Monday at 6 p.m., at the home of his daughter, Mr J. L. Morris, Pembroke. The announcement of his death caused general and sincere sorrow in town, where Mr Menzies had spent fifty-five years of his life, and where his gentlemanly manners, courteous bearing, and his bright social characteristics endeared him to all who enjoyed the pleasure of his acquaintance. He was one of our landmarks – conspicuous figure in our social and business life – and he will be greatly missed.

After being taken to his daughter’s home Mr Menzies seemed to improve for a time, but it soon became apparent that he could not survive the complications that arose. he realized the fact, and met the issue with a strong faith and a cheerful mind. In the closing days, like many another of those who have passed the allotted spank, he was much with those of his boyhood – with his parents and the friends of his youth in bonnie Scotland. During the midnight hours of Sunday, in spite of his weakened condition he was heard distinctly reciting the twenty-third Psalm from beginning to end; and in his semiconscious moments the watchers recognized the words that told of the old-time friends. Mr Menzies suffered little physical pain, and was patient throughout. The funeral took place today (Thursday), the remains being brought by train to his residence here, where many took a last look at the familiar features. At two o’clock a service was held at the house, conducted by Rev Mr Hutcheon, pastor of St Andrew’s congregation, of which deceased was a member; and at its conclusion a large cortege, composed of people of al classes and creeds, followed the body to the grave. The late Mr Menzies was born April 6, 1822, in Little Dunkeld, Scotland, a village which is of historic interest in the famous Vale of Athol. It is almost within gunshot of Logie Rait, the birthplace of Hon Alexander Mackenzie.

Mr Menzies was one of six children, and worked on his father’s farm till he came to Canada in 1844 – over fifty-five years ago. After coming across the Atlantic he worked for a year in a store in Bastard township, Leeds county. He came to Almonte in 1845, and had been a resident of this place for fifty-five years. After coming to Almonte he entered the store of the late Mr John Gemmill (father of Lt- Col J.D. Gemmill). After six years’ service with Mr Gemmill he was taken into partnership, the firm being styled Gemmill & Menzies. About a year later Mr Gemmill died. Mr Menzies bought out the interest of the estate in the store, and continued the business in the same place till 1853, when he built a store and residence on Queen street and moved into it. Mr Menzies owned that property at the time of his death, and occupied part of it himself.

Mr Menzies continued the store in this building till 1863, and in 1864 was appointed registrar for the North Riding of Lanark, the position being left vacant by the resignation of Mr Ormond Jones (registrar at that time) to accept a similar position for Leeds county. Mr Jones was the first registrar appointed for North Lanark, but never lived here. He resided in Brockville, and the work was done by the late Matthew Anderson, deputy-registrar, who died in the year 1867. (A coincidence may be mentioned here, viz., that Miss Anderson, daughter of the above mentioned deputy-registrar, had been for some years and is still filling the position of deputy registrar.) Mr Menzies filled the position ever since 1864, and is said to have filled the office for a longer period than any other registrar in the province. In September, 1852, Mr Menzies married Miss Mary Agnes McFarlane, of Pakenham, sister of Mrs D. Fraser, of this town, of the late Mrs Brooks, of Brockville, and of the late Robert McFarlane, of Stratford, who was for many years the able representative of Perth county in the old Canadian parliament. Mrs Menzies died in March, 1888, leaving behind her, besides husband, three children – Dr J.B. Menzies of Lachute, Que; Mrs J.L. Morris (Minnie), of Pembroke, and Mr Robert Menzies, of Victoria, B.C.

In the fifties Mr Menzies was captain and adjutant of the old militia company – in the days when the company used to drill on the 8th line of Ramsay, near the old church, and at times in Almonte, which was at that time called “Waterford.” For a great many years Mr Menzies was an influential member of the Almonte school board, and was one of the most active in securing the establishment of the Almonte high school, which was opened in January, 1871. He was returning officer for North Lanark many times. He was justice of the peace for thirty years or more. He was a member of the Ramsay council for one year – before Almonte became a separate municipality. Mr Menzies was always a good businessman. He was president of the Ramsay Woolen Cloth Manufacturing Company, which was organized at a joint stock company in 1850, and was the first woolen factory in Almonte. In 1852, when the mill was nicely in operation, it was destroyed by fire. Mr Menzies was the first president of the North Lanark Agricultural Society, a position he held for two or three years, and was for many years on the board of directors. In recent years he filled the position of an auditor for the society. It will thus be seen that Mr Menzies served his day and generation in a great many capacities, and that his experiences in life were many and varied.

Possessed of a high degree of intelligence and an excellent education, he always took an intelligent and cautious view of all public matters. Blessed with a good memory, he was full of interesting reminiscences of the “good old days,” and found pleasure in relating them to his younger friends. In politics, before he was appointed to office, he was an active an influential member of the Liberal party. Mr Menzies was hale and hearty for a man 78 years of age, and but for the unfortunate accident he met with he would probably have reached the nineties. But he had gone to his reward, leaving memories of a pleasing personality and a genial cordiality which will not soon be forgotten.

This seventeen-room house—all rooms interlinked—was built in 1853 by John Menzies, a school trustee, township councillor, and registrar for North Lanark. Of the Anglo-Norman style, more commonly found in Quebec, the lower half was originally used for a workshop/store and the upstairs for family living quarters. In the 1920s, it was threatened with demolition, but was saved by a local druggist, Mr. Patterson.

Remnants of the Ramsay Woolen Mill

Gwladys Williams Menzies– Celebrating a Local Girl who Made Good

There was a man in the 1860s who was not half native but also hailed of German descent named Norman Bernhardt. He was a really strong man and hailed from Otter Lake and worked for the John Gillies Lumber Yard in Braeside. Although he strong as no other he only measured only 5 foot 8 inches. One of the tales that is still carried on to this day was that he lifted three pork barrels end to end. A barrel of pork weighed 240 pounds in those days, but he mastered this very impressive feat.

On another occasion while working at Bertrand Lake, he carried 14 bags of oats a distance of a mile and  a half over a portage. The oats averaged 72 pounds a  bag. That would make the weight he carried a little over nine hundred pounds.

A well known Ottawa Valley lumberman who told this story but did not want his name used, for fear he would be branded as a stretcher of the truth says that six or seven of the bags were carried by means of a *tump line and the remaining bags were piled on top of the man’s head and shoulders. Believe It or not. 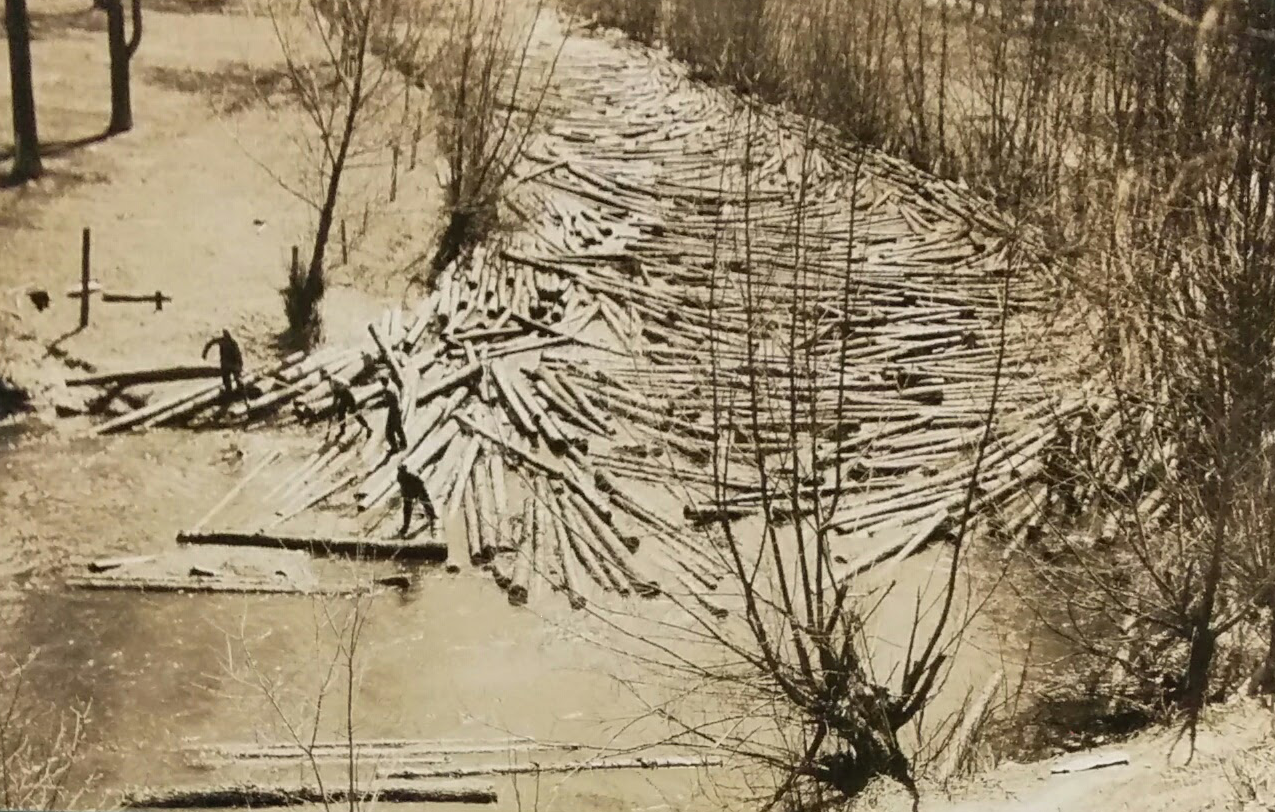 The third and last feat of strength credited to this gentleman took place in Otter Lake. It is alleged that on this occasion that he carried a weight of 2.200 pounds of wheat a distance of over 100 feet. Hard to Believe.

I kind of have to think twice at this story, but there were undoubtedly some remarkable men that existed in our local history. and Andrew White of Pembroke, the millionaire lumberman of Pembroke, and champion lifter of of the Ottawa Valley.  So we put the feats of this man in the records in the legends sections.

*A tumpline (/tump-lyne/) is a strap attached at both ends to a sack, backpack, or other luggage and used to carry the object by placing the strap over the top of the head. This utilizes the spine rather than the shoulders as standard backpack straps do.

How Strong Are You? The Strong Men

Do You Know These Gingers?