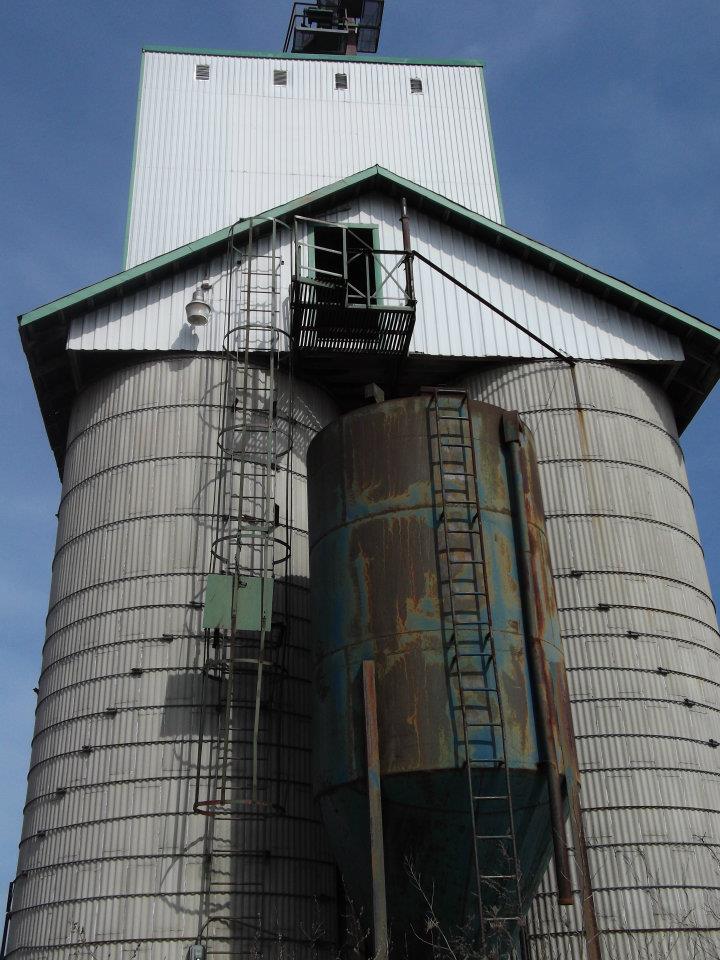 Llew Lloyd Don Montgomery was the original owner . He moved his business there from downtown Ashton , the building now occupied by the Ashton Pub. The business in Ashton was run by Don’s dad Roy, Bob Montgomery’s grandfather.
Dale Costello Many a horse drawn trip there with my grandfather early 50’s
Faye Campbell Yes was the old Ashton grist mill, but has been closed for years! Donnie Montgomery had it built and served all the Farmers well in the area. It was sold and continued to be run (cannot remember name). Must have closed in late 80’s 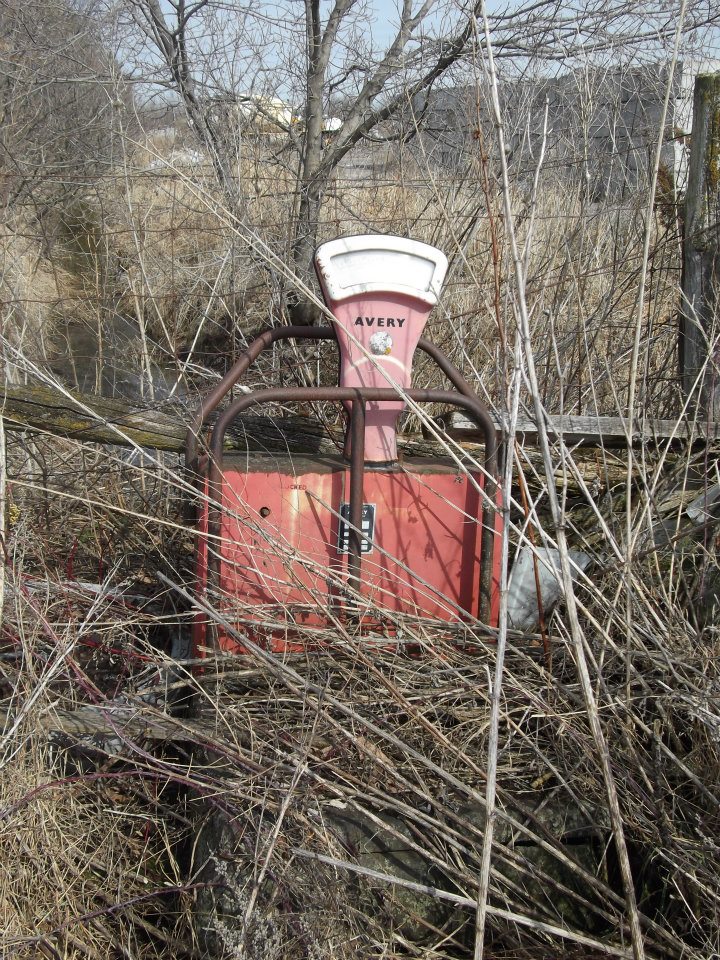 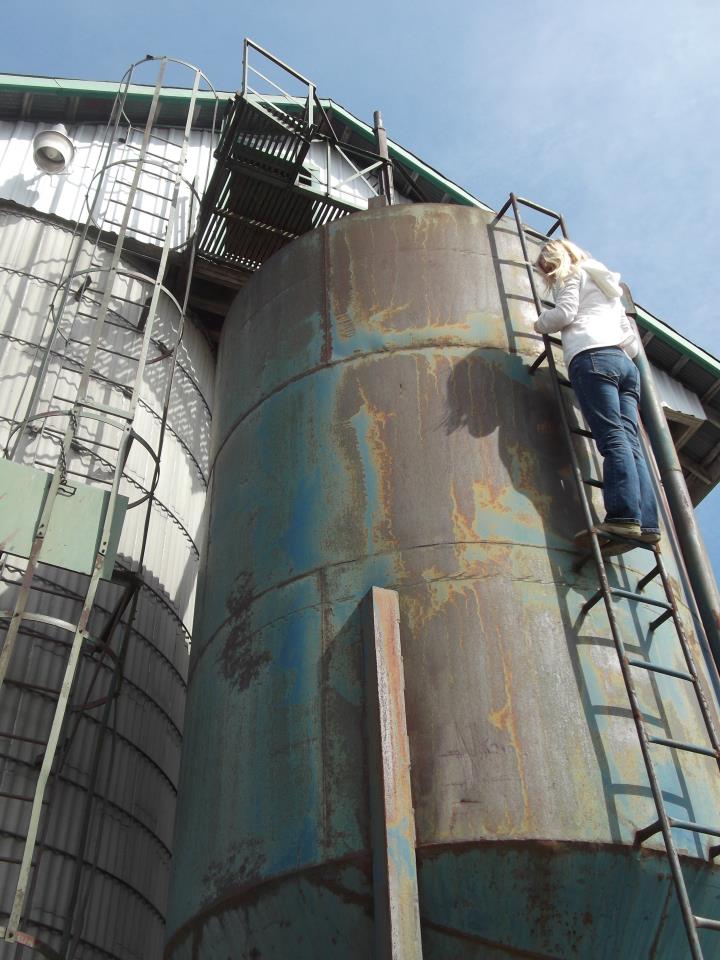 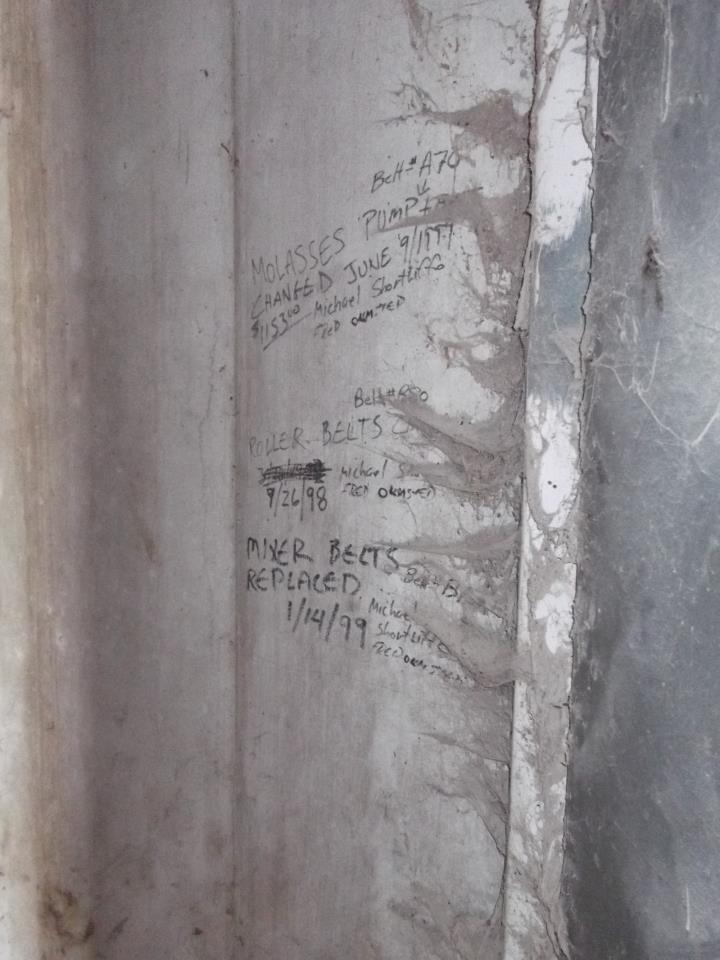 Photo- Faye Campbell
My nephew took this picture of the old Grist Mill at Ashton Station next to the Cavanagh Concrete Plan
District 8 Chief Todd Horricks captured dramatic video of the structure in flames from top to bottom and billowing thick black smoke. He thanked the Carleton Place-based Ocean Wave Fire Company and Beckwith Fire Department for pitching in.

If you have not checked out the Carleton Place and Beckwith Heritage Museum Facebook page you should. Many many great pictures! Sometimes the curator, Jennifer Fenwick Irwin, and I some how get on the same wave lengths. As I was about to publish a lonely black and white picture of the  150th Anniversary last Friday Jennifer put up some pretty spectacular colour pictures of the Centennial Parade on the Museum’s Facebook page. 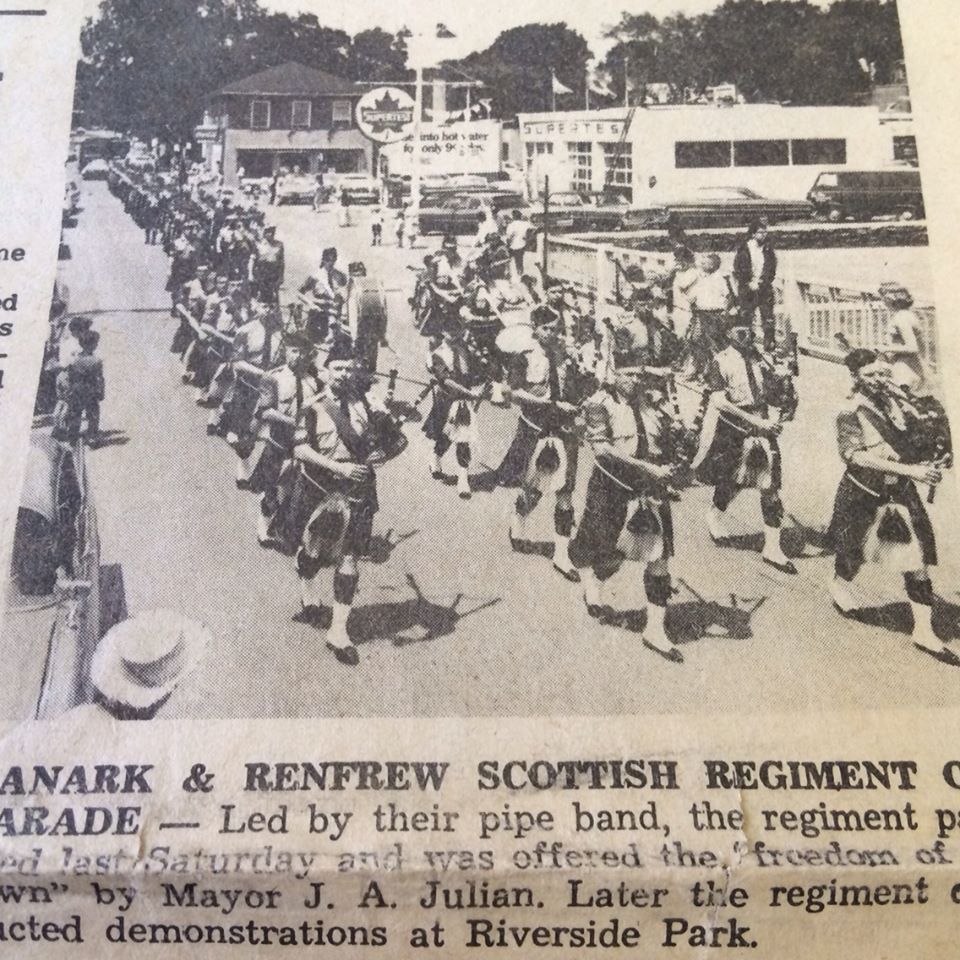 Sunday skies greeted the third day of the 150th Anniversary festivities with a huge parade on Monday. Once again crowds lined Bridge Street and Lake Ave West as the parade winded down to Riverside park.

The parade was over a mile long, and it eclipsed the mammoth parade during the Centennial Celebrations two years ago. So many took part it would be hard to itemize them all.

The Festival Committee consisted of: Ormond Giles, Ernie Snedden, George Macklem, Elmer McIntyre and Ed Beaton. Eldon Henderson was the usual parade marshal. The day also marked the arrival of the Boy Scouts attending a jubilee camp set up in the territory south of Lake Avenue West near the High School The day concluded with fireworks and a dance at the Armouries 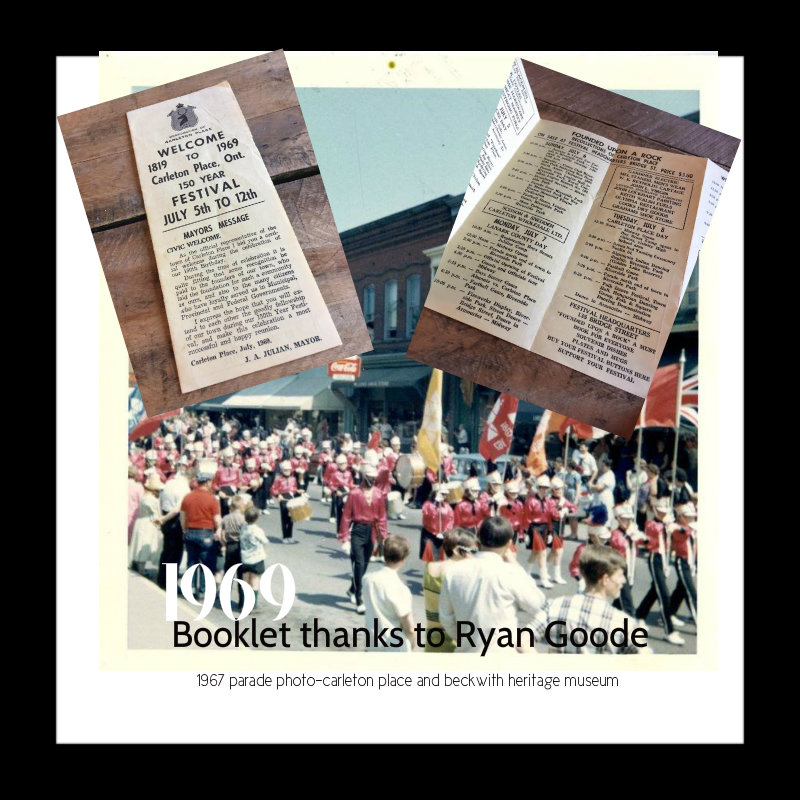 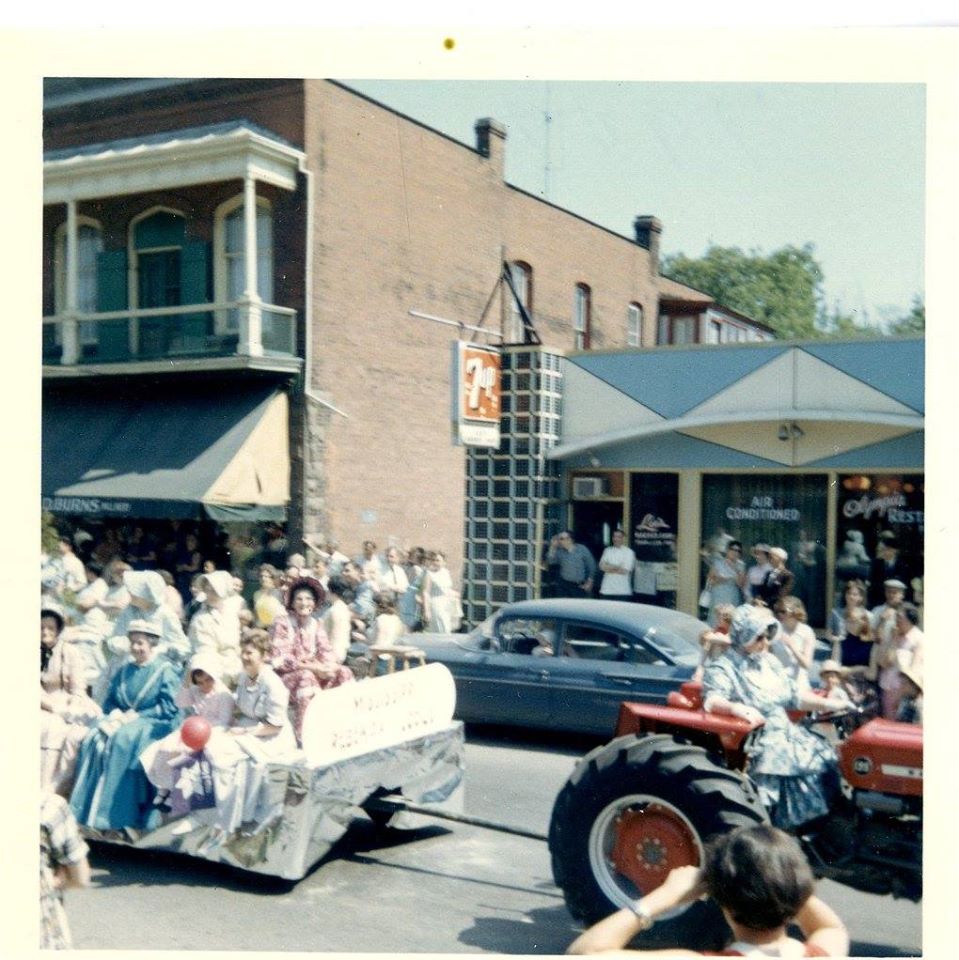 Cathy Stanfield– This is the Rebecca Lodge float. My Mom and Aunt were members for years. The ladies either made or had made the outfits they have on. I know because I still have my Mom’s s dress and bonnet.  She’s on the far left with the black ribbon on her bonnet. Jean Bradford is driving the tractor. The Rebecca Lodge did a lot of volunteer work back in the day and were great supporters of the Marching Saints Drum Corp

Sigh, where has that old Bank of Nova Scotia building gone?

Do you know any of these people the 2011 Christmas parade? 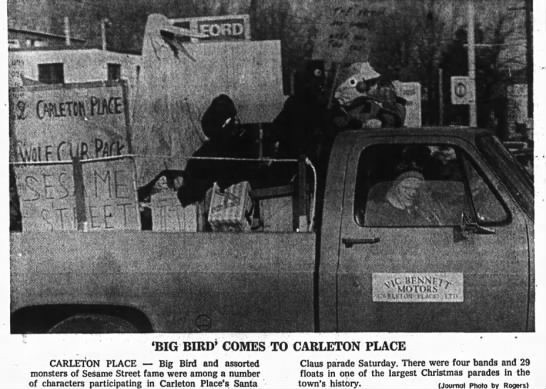 You have met Amanda McNeely, Tiffany Nixon, and Teri White who are part of our working team for your Ladies Who Lunch date on June 6th. Here is another one of our members ready to put this shindig all together.

A few years I wrote a blog about my forever friend Sheila Wallet Needham, and there isn’t a week that goes by that I don’t remember the happy times we had. Do you remember your past friends each day? Two weeks ago Marian MacFarlane told me all about her childhood friend in Packenham. Late last week she asked me to add to it as she remembered more of what she enjoyed with her visiting friend.

So today as my person of the day, and also a member of the Ladies Who Lunch organizing group, I proudly introduce to you my friend Jennifer Fenwick Irwin, curator of the Carleton Place and Beckwith Heritage Museum.

Jennifer grew up in the city of London, Ontario. She had a life I longed for, with her professor and iconic artist father, and her mother also was a talented artist. She and her older brother Graeme resided in an old rambling house full of art students, easels, rising loaves of bread, spinning wheels, and music.

After graduating from High School she traveled around Europe for 6 months then moved back home and in with a boyfriend who played guitar for a punk rock band. Jennifer spent her days working in bookstores, and evenings were spent next to an amplifier in whatever venue he played. As she said, “after two years, hence the deafness”.

Through the wire in 1988 she heard about a Museum studies program and moved to Ottawa. By the third year she had landed a great job at the Museum of Civilization, and met her future husband Pete Irwin. She actually spent a year living in a log cabin right downtown in the market.

Jennifer spent the next two years working at the Museum of Civilization and then at the Library and Archives Canada for another year until her first daughter Olivia was born. Daughter Bridget soon followed, and she landed as she said, “another great gig” working at home for the Glebe Home Day Care program. Each day was tea time and dress up with 5 little girls, including her own.

Jennifer and Pete wanted to set down roots for their family and chose Carleton Place as their destination. Her brother lived here, and they felt they could get “more home for their money” in this area, and bought an ancient 4 bedroom home. The day they signed the final papers Jennifer found out she was pregnant with baby number 3 and newborn Henry took over the room that had been planned as an office.

The Irwin family has lived in Carleton Place for just over 18 years. Jennifer has done her share of jobs from: working at the IGA, Scotiabank, commuting to the Textile Museum in Almonte, and the Library and Archives in Gatineau. During a sejour of unemployment she began volunteering at our Carleton Place and Beckwith Heritage Museum. When they received a substantial private donation, Jennifer was hired to catalogue and organize all the artifacts in their collection. Do you know there are over 10,000 and counting?

As she said, somehow they have managed to find the money to keep her employed there for almost 4 years, and she is now officially the Museum Manager/Curator. She takes care of every aspect of running the museum with about 10 regular volunteers and an elected Board of Directors. Between the administration, grant writing, exhibit design, event planning, fundraising, and research, it keeps her busy. If that wasn’t enough, she has recently been tasked with assisting the Roy Brown Museum, the town’s Municipal Heritage Committee, and being the liaison to Council for all three groups. By the way, she still hasn’t finished cataloging all the artifacts!  After all, *”a Museum should never be finished, but boundless and ever in motion” like Jennifer.