There were high jinks in Darling over the last weekend and there was every reason for a celebration of that kind. Mrs. Jennie Majaury reached the age of 100 years on June 25th which makes her almost equal with the mythical Johnnie McGlorie that they used to tell us about when we were youngsters.

Mrs. Majaury at the centenary mark is a remarkable woman. Her eyesight is still so keen she can knit without glasses and her hearing is sharp enough to detect the sound of a locomotive whistle on the Kingston & Pembroke Railway many miles away. Mrs. Majaury is a native of Darling Township, having been born on a farm within a mile of the one on which she spent all of her life following marriage and widowhood.

Her father was Joseph Crawford, an Irish immigrant who came out to this country in his youth and settled in the northern part of Lanark County. He married Peggy Stewart, an Old Country girl who hit the long trail to Canada in the sailing ship days. Back in the long, long ago Peggy Stewart married Henry Majaury and, as stated before, the honeymoon excursion was confined to about a mile. There was a family of nine children, five of whom are still living.

Mrs. Majaury’s husband died upwards of 70 years ago and she was left to bring up the youngsters. She did it, too, with that grim determination characteristic of the pioneers. She made potash and made a living out of the rough country in which she had been born.

Mrs. Majaury for all her 100 years was the life of the party in many ways—certainly she was the central point of it anyway. She told of the far off time when she and her sister, Sarah Ann, used to tramp all the way into Almonte to buy supplies for the household. They would make the trip in one day, rest for a day in what then, no doubt, was Shipman’s Mills, and return home the third day with the stuff on their backs.

They felt none the worse, of it and considered the journey a sort of excursion such as some young punks —male and female—might feel today about a motor jaunt to Ottawa via highway 44. Many people from all over North Lanark and South Renfrew called to felicitate the elderly lady on her one hundredth birthday. Among them were John Craig, former M.L.A. for Lanark and Lome Stewart, Reeve of Lanark Township and former Warden of Lanark County. Express Felicitations Letters of congratulation were read out to her from Jas. Dempsey, M.L.A. for South Renfrew; Hon. George H. Doucett, M.L.A. for Lanark and others.

Like most old people, Mrs. Majaury is a hospitable person and has a rule that no one who calls upon her can leave without the traditional cup of tea. On Saturday night, during the festivities, she step-danced with great agility and an 80-year-old lad from Fallbrook (Murray by name) is said to have got up and done the same. As stated before, her eyesight is good. She knits and reads. In the summer she likes to go about iki her bare feet as was the custom in olden times. Like most centenarians, Mrs. Majaury who is a Presbyterian in religion, was asked to what she ascribed her great age. And while this may shock the clergy the Gazette takes especial delight in “witnessing to the truth” as Martin Luther said on one memorable occasion.

Declared Mrs. Majaury—”I go to bed early and always got up early. I like a drink of liquor and I love to smoke my pipe.” It Is said that Mrs. Majaury was presented with 15 pipes during the festivities by those who knew her fondness for the combustion of chewing tobacco which would raise the top of most veteran tobacco smokers’ heads. Truly it is hard to figure out the reasons for longevity. So many people who have no so-called bad habits—we mean smoking —live to be 100. How are we going to figure this thing out? We’ll leave it to Mrs. Majaury. She has more experience than we will ever have. , Mrs. F. O. Somerton of Water Street; Almonte, is a great granddaughter of Mrs. Majaury.

Mrs. Henry (Jennie) Majaury — “Grandma Majaury” — of Darling Township, (where nobody can remember when she wasn’t around) passed away peacefully at her home on the Lanark-Calabogie Road on Sunday evening, February 13th. In poor health since Christmas-time, her stamina was worn down so that she could no longer keep up the struggle of life. With her passing goes a link with the romantic and colourful past of Darling Township, which Mrs. Majaruy had seen transform from a pioneering community to a community with all the marks of progress and modern trends.

Born on June 25, 1851, the daughter of Joseph Crawford, an Irish immigrant and Margaret Stewart, a Scotch immigrant, Mrs. Majaury, the former Jennie Crawford, embodied characteristics of both nationalities. Born in Darling Township, she lived her whole 103½ years in the same community. She kept a young spirit throughout all her life and was always ready to learn something new and interesting. Her home was a popular gathering place not only for the members of her own family but for all who in late years came to visit this “grand old lady of Darling Township”. She did not know much of luxury or of convenience but that did not prevent her from having a cheery disposition, a happy outlook on life and an indomitable spirit. Her Irish wit and humour were ever on display and even during the last few days of her life her active mind was ready with a sharp remark or a spirited quip. Friends said she cherished life not for the number of years but for the joy of living and doing things. Her deep concern of the past few years was that she was not able to do as much as she used to.

It was not her privilege to enjoy much schooling but one could never think of Grandma Majaury as not knowing much. What she lacked in schooling she made up for in the broad school of experience. Her kindly way, her hospitable manner and her ability to get the most out of life endeared her to her family and the host of people who were her friends. During her lifetime she witnessed many changes and saw such events as the old ox-team give way to the horse and then the motor car. One of her fondest dreams was to have an airplane ride and this dream came true on her 102nd birthday when she was taken up “in the air so blue” at Carp. “The only trouble”, she commented, “was that they didn’t take me up high enough nor keep me up long enough”.

Of late years her birthday celebrations were grand occasions and usually lasted for several days. Friends and relatives from many points made a special effort to be with her on these occasions. And when the evening came she would become young again and dance a jig to start off the dance.

Mrs. Majaury was mother to five sons and four daughters and never did she have the assistance of a doctor. As well she helped to bring up several other children. Of her family two sons and two daughters are deceased. Her husband died in 1912. Surviving are three sons: Thomas and Joseph of Darling Township, and James of Carleton Place; two daughters, Mrs. Joseph (Margaret Ann) Foster of Calabogie and Mrs. William (Katie) Folkard of Carleton Place; 59 grandchildren, 150 great grandchildren and 26 great-great grandchildren.

In her earlier years she was much devoted to community work, besides caring for her family. She has mentioned many times of walking the fifteen miles to Lanark or to Calabogie to shop. But through all her life she maintained a healthy outlook and a strong faith in her God.

Funeral services were held from her late home to St. John’s United Church, Hopetown, on Thursday, February 17th with a cortege almost half a mile long. It was the largest funeral ever held in Darling Township and friends and relatives came from Renfrew, Kitchener, Calabogie, Toronto, Cobden, Lanark, Carleton Place, Smiths Falls, Almonte, Clayton, Arnprior, Georgetown and Port Hope. Her daughter, Mrs. Foster of Calabogie and her son, James of Carleton Place were unable to attend because of illness.

Rev. R.J. McNaught of Lanark conducted the services both at the home and at the church and in his message he paid fitting tribute to the life, which, for over a century, had played such an active part in her home and community. Rev. M.M. Hawley of Middleville was ill at the time with laryngitis and unable to attend and take part. Assisting in the service was the choir of St. John’s Church with Mrs. Harvey Wilson as organist. Mr. Harry Stead sang a solo “Good night and good morning”. The interment was in St. John’s Cemetery. Pallbearers were Messrs. Lawrence King, Peter Lalonde, Harold Devlin, John Kubesiekie, Howard Virgin and John James.

The many floral tributes bore mute testimony to the esteem and affection in which she was held and were as follows:

The article and photos above submitted September 1999,
the photograph below submitted January 2000,
by Jo-Anne (Majaury) Camelon

So What Happens When You Turn 100 in Carleton Place?

Among the Strangers There Was… 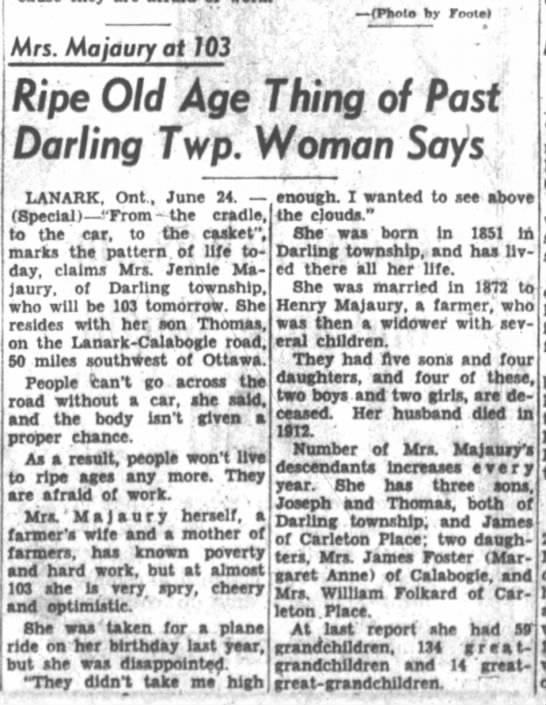 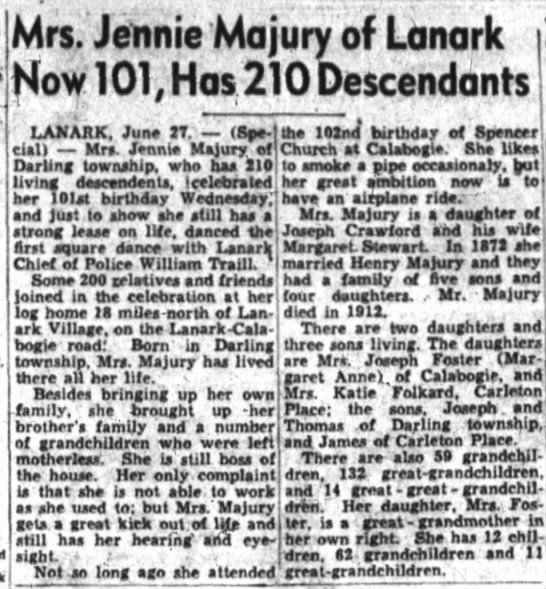 Kevin Percy– sent this.
Here is the article about Jennie, from the Ottawa Citizen, Saturday July 01, 1950. Found using newspapers dot com. Not the article requested, but offered in case it is of interest.

Donna Mcfarlane round this on ancestry originally posted by a vanessa johnson of jane jennie majoury
John Morrow added
My grandmother, Agnes (Napier) Morrow 1891-1971 told me two or three years before she died, and the story was repeated to me almost verbatim about 25 years later by her daughter Beatrice 1924-2017, wife of “Granny” Majaury’s great-grandson Kenneth Whyte, that Granny Majaury’s common first name was JANNIE, not Jennie. Jannie Majaury’s brother John Crawford was married to my great-grand aunt Sarah JANE Wark, and my grandmother, along with most of her generation in Darling Township knew her as Aunt Jannie, with the next generation being the first to call her Granny. Jannie was also fudging about her age, competing with a neighbour named Spencer Church, who died in June 1961 at 105 but claiming to be 111; Jannie was actually in her 100th year when she died.
How many spellings of Majaury are there? Take a look…
Clipped from The Ottawa Citizen, 09 Jul 2002, Tue, Page 26

So What Happens When You Turn 100 in Carleton Place?

Among the Strangers There Was…