James Moulton was my Grandfather and lived across the street from us on Sarah Street in Carleton Place. He was crushed in an accident and he lived to be 87, but he was never the same, could only do light work.

The CPR gave them a free pass for anyone in the family that could be used in their lifetime as payment from them, and it was used a few times that I know of.

They had a small farm on Sarah stretching as far as what is now the subdivision on the east end of Woodward Street. His hay field was where Caldwell Street School is now, and they ended up selling they the property to the school board.

I remember him as only having the one cow, lots of chickens and I earned my Girl Guide Badge for working on the farm and milking a cow. Grandpa was old, smoked a pipe and chewed chewing tobacco, when I was a kid.

I picked up his chewing tobacco at McCann’s Pool Hall (imagine a girl going into the pool hall) and it seemed that everybody stopped what they were doing to look, every time I went in there.

He was a wonderful man, couldn’t read or write but made sure all his children, 9 of them went through to grade 13. The girls all went to Taber Business College, the boys apprenticed in Findlays, all but one of them. What memories I have of him.

On Monday afternoon Mr. James Moulton of the C.P.R. shops in Carleton Place was seriously injured whilst engaged in assisting in repairing a snowplow. In some way the wing was put into motion and Mr. Moulton was caught and most severely crushed. He was rushed to the public hospital in Smiths Falls with little delay and everything is being done to save his life with very little hope of success. Mr. Moulton is 48 years of age and has a wife and seven children depending on him. 1925-02-06- Almonte Gazette

Ted Hurdis  my grandmother and her sisters Maude McGonagall, and Ruby Featherstone use to pick wild raspberries up on that property every year

Norma Ford We all played in those fields. Back then (1950’s for me) you could walk through the pasture right through to Lake Park. There were two farms but we went around them, It was a wonderful life for us kids back then. Grandpa didn’t like us trying to ride his calves. lol

Amanda Jane Norma Ford years ago we found an old tombstone in the soccer field next to the apartment buildings in that area.

Norma Ford I will also add that Mrs. Harriet Moulton, his wife and my Grandmother, gave birth to a daughter the same day

Carol Ethridge He was my grandfather also. I was only 7 when he died, don’t have as many memories as Norma but I do remember him giving me a metal cup with milk straight from the udder. I took a big mouthful of it and spit it on the barn floor lol 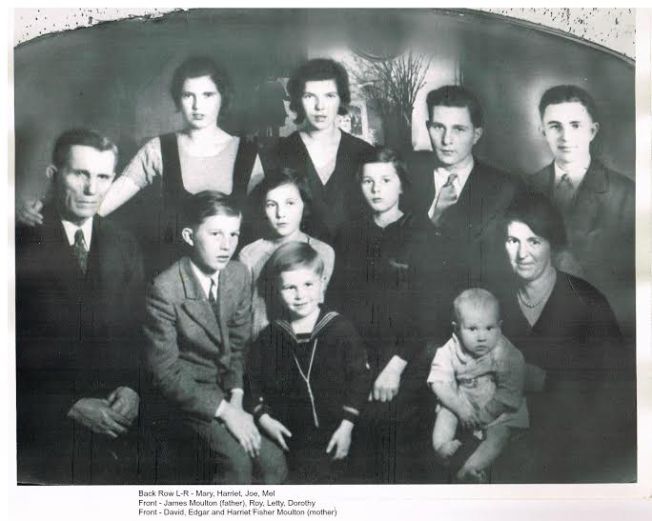 The attached articles are about my Grandfather, James Moulton.  The day his accident happened, my Grandmother, Harriet Walker Fisher Moulton gave birth to their youngest daughter which made 8 children.  They eventually had two more sons. 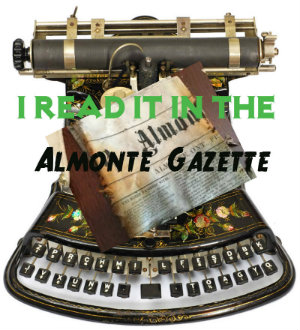 James Moulton was my Grandfather and Harriet Walker Fisher my Grandmother
who had a farm across the street from us on Sarah Street.All the children were born at 26 Sarah Street, in later years it was changed to 92 Sarah Street.

On Monday afternoon Mr. James Moulton of the C.P.R. shops in Carleton Place was seriously injured whilst engaged in assisting in repairing a snowplow. In some way the wing was put into motion and Mr. Moulton was caught and most severely crushed. He was rushed to the public hospital in Smiths Falls with little delay and everything is being done to save his life with very little hope of success. Mr. Moulton is  48 years of age and has a wife and seven children depending on him. 1925-02-06- Almonte Gazette 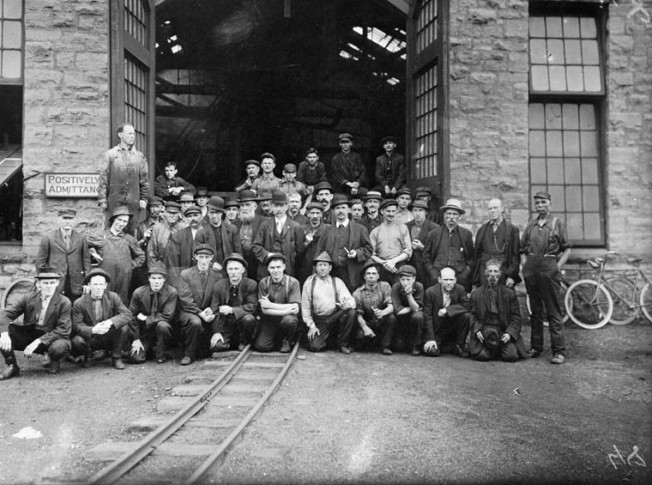 The CPR gave my Grandparents a lifetime pass with the railroad and it was used a couple of times, mainly to go to Montreal when there had been other serious accidents in the family (Montreal seemed to be the place to go for medical care).  As far as I know, he did not receive any other financial benefits, and I don’t know if the CPR paid for his stay in hospital.  My Grandpa did not go back to work at the CPR, he was never very healthy after the accident.  He farmed on Sarah Street, Caldwell Street (where the school is now) and also a few acres on Woodward Street.  He lived to be 87 and died November 8, 1962 of “hardening of the arteries”, known as Alzheimer’s now. —-Norma Ford 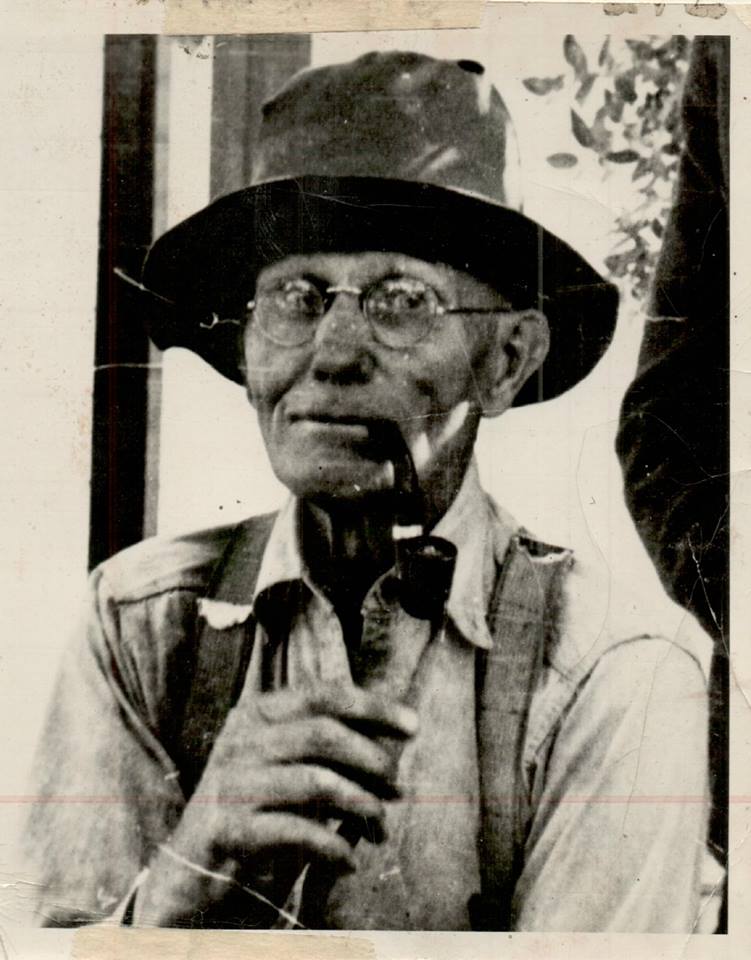 My favourite picture of my Grandfather James Moulton (how I remember him) and some of your readers will remember him from this picture.–Norma Ford 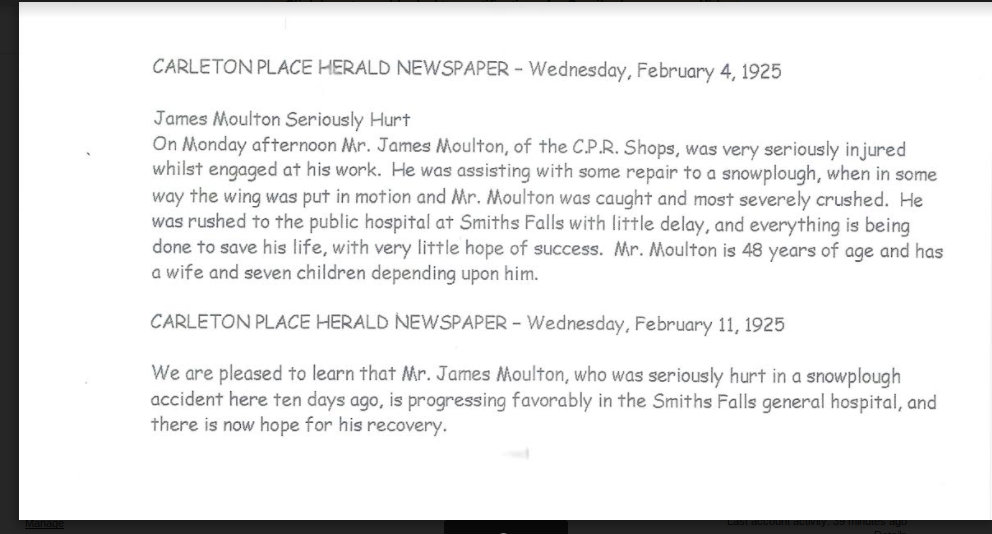 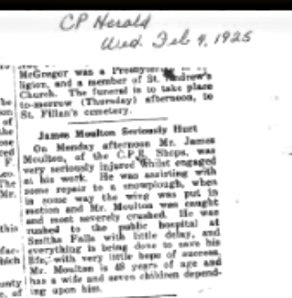 Norma and I still have not found out when he was released from the Smiths Falls Hospital and returned to Carleton Place in the newspaper archives.

I know when he was sent home we was still bedridden.  My Grandmother did what a physical therapist would do today – rubbed him down, made sure he was turned and made him exercise his limbs.  She was credited with getting him walking again.  Something we think nothing about today but it must have been a real hardship back then with a bedridden husband, a new baby and 7 other children. 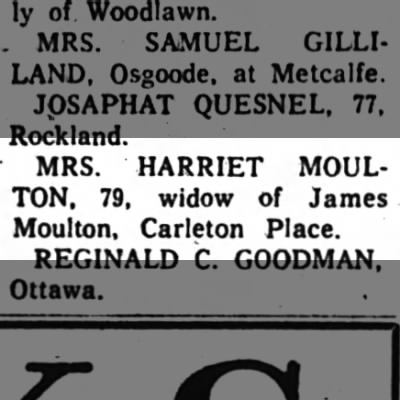 They (the family) said he was never the same physically again although I remember him milking the cows, other farm related work and he had a massive garden that he maintained although I now realize why he worked slower than my Dad.  —Norma Ford 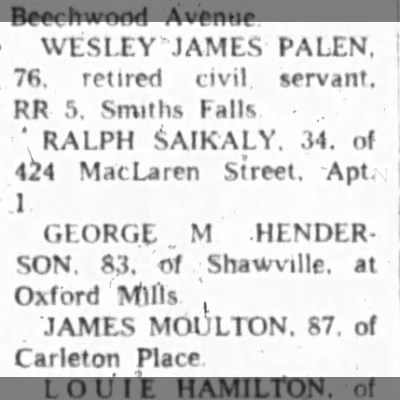 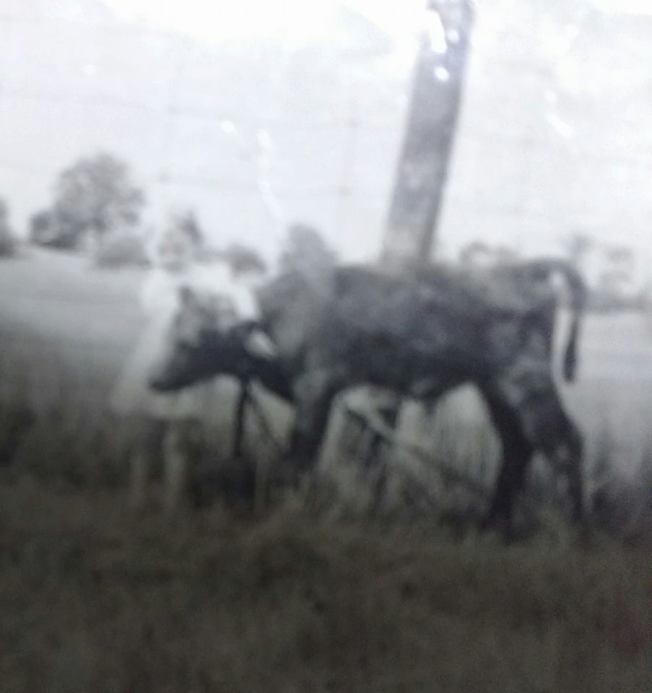 This is a picture of Norma Ford’s family cow on the old Caldwell Street farm.  Donna McLaren posted it as she loves this cow..thank you! 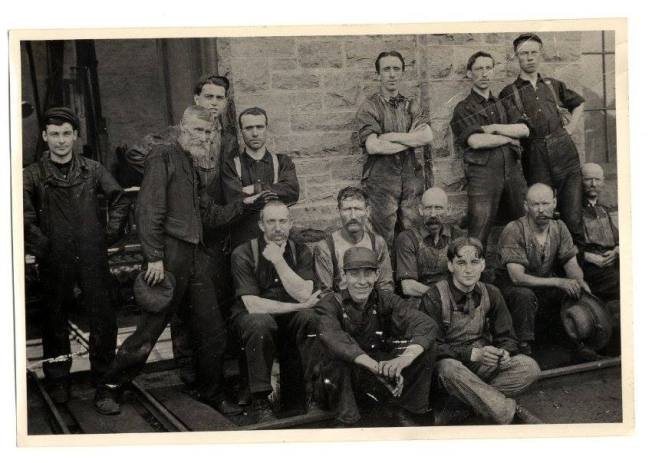 Today’s photo is of workers taking a break at the CPR Engine Repair Shops. Built in 1890 as a round house and repair shop for the Canadian Pacific Railway, it employed about 200 workers. After operations were moved to Smiths Falls, the building was purchased by the Canadian Cooperative Woolgrowers. Iron tracks from the turntable in the roundhouse were sold as scrap to help the war effort in 1940. Can you help us identify any of these men?–Carleton Place and Beckwith Heritage Museum