Unfortunate.—One day last week Miss Mary Hart, a young lady of this place who has been attending the High School for some time past, was taken to the Perth gaol, having been committed by Mr. James Rosamond, as an insane person.

In the old days women used to be committed for even PMS and why James Rosamond owner of the Rosamond Mill committed her tells me that her Father probably worked for him. I searched the archives and in insane asylum data bases and found nothing about her which made me sad. Looking at the age of her parents and the amount of siblings, which she was probably responsible for tells me she must have had a tough life.

Most of these women were kept in jails, or left to care for themselves. Sometimes they were left to wander at will and the fact I cannot find much more about young Mary Hart makes me wonder if she did not die young, I am going to keep searching.

Almonte:  Insane—One of the workmen employed in Mr. William Wylie’s woolen mill named Thomas Glasgow, became deranged in his mind last week and was taken to the county gaol for safe keeping.  The unfortunate man has always been a quiet, industrious, and temperate man but a short time ago he lost his wife, which misfortune is supposed to have caused his present insanity.

Insane—A few weeks ago a young man named Patrick Bowes, son of Mrs. Bowes of Almonte, showed signs of insanity which last week culminated in an undeniable attack of that dreadful complaint.  He was committed to the gaol at Perth on Monday last on information laid down by his uncle, Mr. John O’Neil of Bathurst, there to await the action of the asylum authorities.  He is about 17 years of age and in his affliction both he and his widowed mother have the entire sympathy of the people of Almonte.

While you have shown the obituary for James Rosamond Jr. it was likely his father James Rosamond Sr. who had this woman removed from her home. James Sr. was very involved in the affairs of the town. He also had a personal experience. One of his daughters Rosiland married a doctor from Carleton Place Dr. William Hurd. Dr. Hurd died shortly after the birth of their first child in 1868. Rosiland and the child moved home to her parents. However some time between 1871 and 1881 Rosiland went to live in the Toronto Hospital for the Insane where she died in 1908. 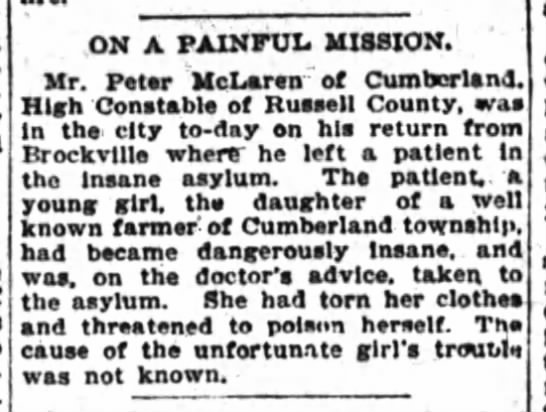 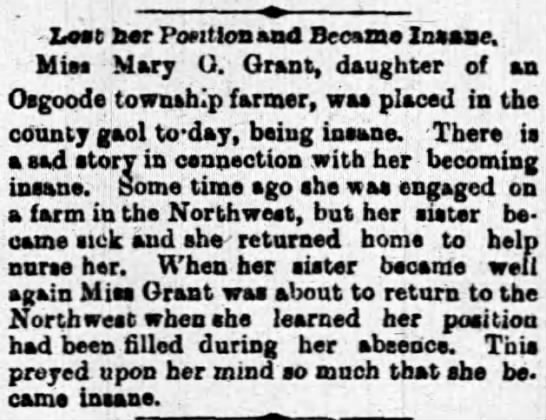 Have you Heard About Nellie Bly?

Waiting at the Perley Gates? Perley Home for Incurables