There was a time was when the Ottawa’s facilities for cases of smallpox were poorly inadequate, and when the only ‘pest house” was a decrepit, rat-ridden shack unfit for human habitation. The outbreak of smallpox was a very real menace and those inflicted slept three to a bed inside, and outside, 10 patients shared one tent on Porter Island.

In February of 1911 a Water Street mother spoke to the Ottawa media and said she was not going to send any child of hers “to that Isolation Hospital” which was situated on Porter’s Island on the Rideau River just south of Edinburgh Park. The distraught woman said she had read in the newspapers about the inhabitable conditions, and even if some city councillors defended it, no child of hers was going there.

Dr. R. H. Parent, chairman of the Board of Health, in his capacity as family physician, had talked to the woman at her home that morning. He had informed her that the child, who was inflicted with small pox, should be placed immediately in the Isolation Hospital despite her concerns. City officials when questioned by the local newspapers insisted that conditions were good, and none that would warrant calling any special meetings. The child was later taken by force out of her mother’s arms to Porter Island by the police.

Charles Hopewell changed all that when he became Mayor of Ottawa, and smallpox was said to be no longer a danger because of the new Isolation Hospital. The city was now prepared for a smallpox outbreak he said. Hopewell Hospital officially opened its doors in February, 1913 to help stop epidemic disease, and public health policies were now changing in Canada.

2 nurses standing with the Isolation Hospital ambulance, with driver in front seat.

In 1927 Mayor John Paul Balharrie (1925–1927) for whatever reasons attached an addition to the Isolation Hospital for diphtheria, scarlet fever, and measles. It was reported by media that “cheapness” was the chief reason. Time was when the Isolation Hospital was run in a rather scandalous manner; but even with the changes local parents still hid their contagious children in their homes rather than be forced to send their children to the dreaded Porter Island. 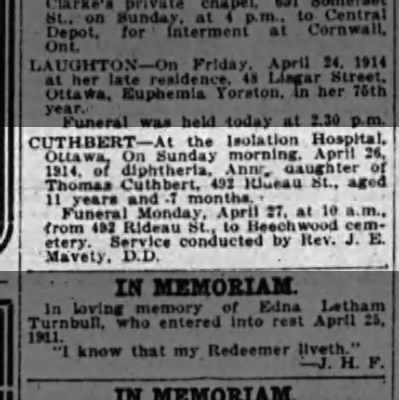 Today, Porter’s Island is home to the Rockcliffe Retirement Residence and the Garry J. Armstrong Home. The island is accessible today only by a bridge from St. Patrick Street, that replaced the metal truss bridge constructed in 1894 by the Dominion Bridge Company. The original bridge is now blocked off at either end and unused, even by pedestrian traffic, and is the only remains of what once was Ottawa’s darker moments.

Thanks to Tammy Marion for colouring this..