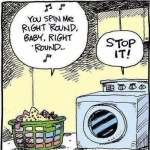 Last Sunday I put a load of laundry in the washer. I am nowhere near Martha Stewart quality when I do laundry. In fact Martha would probably put me in a laundry detention centre if she knew what I was up to. If she saw me folding fitted sheets I would have to explain to her that  I fold sheets similar to fighting a boa constrictor. It’s not that I don’t know how to do things properly as I used to help my Grandmother with the laundry on Mondays. The boiling water was heated up on the stove, and the Laundry detergent was of construction quality. As I watched the old washer toss and turn and groan I listened to her many constant stories of kitchen industrial accidents while the laundry was going through the wringer.

In fact, even if she had asked me to help with the wringer rollers I wouldn’t  have. There was great fear of ending up with lacerations, hematomas, fractures and potentially complete removal of a hand or arm like some poor children had endured in Dunham, Quebec..

Again, I know what I am doing with laundry, but as Frank Sinatra sang: “I prefer to do it my way”. Yes, the first mistake was to load the washer up to TILT. I knew it was just too heavy for the machine– but I moved on. After turning the washer on I realized that I had forgotten some underwear so I pressed the red button so the lid would unlock. Instead of the machine going back on– it decided to have a complete computer meltdown.

What happened to the good old days when the Maytag was a force to be reckoned with? When you could use, abuse, and pretty well do laundry for 30 years without a misstep.

So instead of thinking carefully, I took a “how dare you” attitude with the washer and began to twist  the knob to other washes. I kept pressing button after button with all the confidence of a four year-old in a Batman T-shirt. Finally, with a clear mind, I unplugged it and plugged it back in. Isn’t that a quick fix for anything these days?

What I should have done was Google it and find out the correct way instead of acting like Slappy the Clown. Of course it sputtered and struggled and redid “wash jobs” for the next hour and a half. I stood beside it begging it to submit. As I listened to the water going back and forth, and back and forth, through the pipes I had visions that the basement was being flooded. What had I done wrong?

Actually, I had done something right. I unplugged the machine, but what I failed to do was lift and lower the lid 6 times within 12 seconds like they tell you on YouTube. I had to make sure the magnetic strip on the lid went fully down for contact to reset the machine. Who lifts a lid  up and down 6 times?  NO, I do not follow instructions, nor read step by step instructions. Why? Because you never know when you might run into something interesting.

So victory was finally mine at 5:55 Sunday evening. I had fixed the problem and had no qualms about throwing the second load in as my laundry had been breeding while I was trying to fix the issue. As I loaded the dryer the machine became off balance. Okay, dryer, let’s get ready to tumble!  Quickly, I moved the dryer a tad, put some real heavy Queen Elizabeth History books on top and gave it a kick. Sometimes you just have to ask yourself how you expect to conquer the world each day, especially when you can’t even conquer your laundry. There is no doubt that my housekeeping style is best described as:”There appears  to have been a  struggle!”

I will Wash Your Mouth Out with Soap!

As the World Turns in Carleton Place — Soap and Ground Beef

Who was Cody the Kid in Carleton Place? — Soap Box Memories

Laundry Down By the River

I am a Laundry Girl

Musings about Vibrating Appliances and Other Dirty Laundry

Tales From the Chinese Laundry on Bridge Street

Tales of the Queen’s Underwear and all those “Accidents”

Ashes to Ashes and Spins of the Washing Machine