Thanks Shane Edwards for sending this to me… Nothing better than writing or talking about cake!!!

Freiman’s department store in downtown Ottawa was famous for its whacky promotions. One of them was this giant 4,000 pound cake baked by the Standard Bread Company on Gladstone.Standard Bread opened in 1924, and it seems from the lady’s dress that this picture was taken not-long after that.(LAC Mikan 3615467)

Archibald J. Freiman was known for his promotions. Here is one from what appears to be the Twenties, featuring a lady and a giant birthday cake made by the Standard Bread Company. This was the kind of promo that made Freiman’s the most successfully Ottawa-owned department store of its era.The Standard Bread Company — whose slogan was “The Mother Loaf” — opened in 1924 on Gladstone just west of Preston. The building is still there, now used by numerous artists. At the bottom of the sign is a reference to Mosgrove Street, which used to run from Rideau to George. It no longer exists, having been incorporated into the Freiman Mall/Hudson’s Bay complex across the street from the Rideau Centre. (LAC 1972-229 NPC)

Lorie Elizabeth DunlopI’m not sure about the cake… but for the icing, look for a penuche recipe. It’s delicious!

How Heavenly Funeral Potatoes Got Their Name

Vintage Easter and Bunny Cake Recipes from the 60s and 70s

I Never Met a Fruitcake I Liked

Would You Eat Preserves After 40 Years? 150 Years?

The Days of Smocking and Spanish Bar Cake

“ A lot of rain had run into the furrows from the west side of the creek- it was a slop hole now. I’m counting on the cows wantin’ to get out and I guess it’s about time to let old … the western edge of the homestead, a place he’d concentrated the plowing. When they got to the plowed swath the horses were mired in the mud up over their grith straps. Two men were still stuck in the mud with the horses and the rest had fled into the trees“- Cracker Justice –By Janet Post

During World War II, my dad junked out the steam engine this gear came from and sold it for scrap iron. He used this gear for a base for a mailbox stand. That’s how it was preserved.

Before they scrapped the engine, they used it to smoke meat. When they butchered, they hung the bacon and hams in front, and burned wood to smoke the meat. They would hang the country hams on a chain upstairs and my brother would use his jack knife to cut a chunk off the ham when he wanted a chew of ham.

As boys, my brother and I took the engine’s brass pieces to school and donated them to the war effort. I still have the engine’s original state inspector’s certificate; it was dated 1918.-Lawrence Torske, McIntosh, Minnesota

Photos!! Who is With These Steam Engines?

“Where Are They Now?” Des Moore’s Steam Engine

Did you know that prior to 1923, anyone taking the train in Carleton Place would have left from this station? It was known as the Carleton Junction and was located on Franktown Road, right where Tim Horton’s is today. The stone station across the street that’s now the home of The Ginger Cafe was not built until 1923. The Mystery Streets of Carleton Place– Where was the First Train Station?

I will keep adding to this as I go through my newspaper archives. 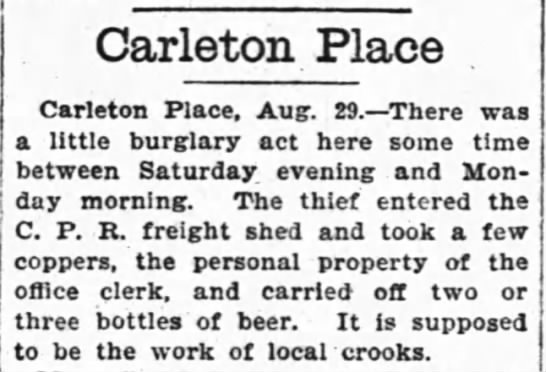 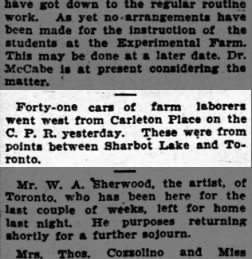 June 6 1882–The keeper of the refreshment room of the CPR at Carleton Place has applied for a beer license and -a lucky bidder at a sale of unclaimed goods at the C. P. R. station got 1,100 yards of dress goods for $12 50. Photo–1901-Carleton Place Train Station

Marge Mitchell —My Aunt lived on Judson Street and the train tracks were about 60 feet from her house…there were so many trains whizzing by everyday. We loved seeing them and ran up to the station and sat on the benches and watched these mighty iron beasts. Such a fabulous memory of old time Carleton Place.

The Men That Road the Rails

The Mystery Streets of Carleton Place– Where was the First Train Station?

Memories of When Rail was King- Carleton Place

Memories and Thoughts of the Grocery Store – Bubblews.