Until recently, the Clayton Methodist Cemetery was nothing but brambles, its headstones as forgotten as the memories of those buried there.  Thanks to the efforts of two local churches, Guthrie United and St. George’s Anglican – the cemetery is now being restored.  Since April 22, the two churches have been working together on Saturdays to undo the years of neglect at the tiny cemetery near Bolger’s Corners.

It has been an intensive undertaking with the dedicated volunteers spending many hours just clearing the massive amounts of brush.  “It took us about seven Saturdays to just clear the brush, to cut it,” says Scotty McAskill, who has been one of the “mainstays” of the restoration project.  That task was made even more difficult by the fact some of the wire from the old wire fence in front of the cemetery had grown into the trees. The fence was removed with the brush.

Once that work was complete, the ground on which the cemetery is situated was leveled off. Charlie Rath, who attends, St. George’s church, donated all the fill for the project.  Work still remains to be done on cleaning up the headstones and setting the bases back into the ground. Since there is no plot plan for the cemetery, Mr. McAskill says the tombstones will be placed “where they are.” Only nine of the original 12 headstones can be located It is feared a couple may have been stolen.  While this project has not been without challenges, all those involved are proud to be part of the restoration efforts.  “It’s the self-satisfaction of giving these people the dignity they deserve,” Mr. McAskill says.

“They were our forefathers.”  Linda Ladouceur agrees, saying it gives her a “sense of accomplishment that we actually did something.”  To participate in the restoration of the cemetery especially means a great deal to Gerald Tennant as his father, grandfather and great-grandfather were all members of the local Methodist Church.  “There’s been talk about restoring this old cemetery for some time,” he remarks. “I’m glad that this has finally taken place.”  Goes back 147 years  Officially registered on Saturday, Aug. 27, 1853 “at half past ten of the clock in the forenoon,” the cemetery was also home to the Methodist Church until it burned in 1879 or 1880.

The brick house across from St. George’s Church was built as a replacement in 1880 with worship being held there until the 1920s when the Methodists in Canada joined with some of the Presbyterians to form the United Church.  Some of the stones from the original foundation of the church remain in the cemetery. Other stones from the property are being added to them to “make an imprint” of where the church was. A plaque may be erected at the location.

A visit to the cemetery is a trip into history. Among those whose names appear on headstones is Edward Bellamy, the founder of Clayton.  The cemetery was also the burial place for a veteran of the War of 1812, James McNiece. Mr. McNiece, who died on Nov. 21, 1850, fought in some of the war’s famous battles – Lundy’s Lane, Sacketts Harbour, Snake Hill and Cook’s Mills. More than 30 years after the war ended, he was credited in 1847 with making a citizen’s arrest of a deserter from the war and taking the a reward for turning in the former soldier, Mr. McNiece was given 500 Pound Sterling. “You could write a book on him,” Mr. McAskill says.  And on the cemetery as a whole as the headstones tell much about the hardships of the early settlers who inhabited this area from the three members of the Cunningham family who fell victim to scarlet fever in a one-month period in 1877 to Sophy McClary who was less than a year old when she died in 1864.

Her sister Irena, who was born in December, 1865, only lived for three months.  Special ceremony – This Sunday (Oct. 15), at 3 p.m., a special memorial service will be held at the cemetery. Father David Andrew of St. George’s church and interim minister Suzanne Sykes of Guthrie will officiate this service of thanksgiving “for the faith, dedication and perseverance” of the early settlers of Clayton. In the event of rain, the service will be at St. George’s church.  Those involved in the restoration project hope the cemetery will be maintained.  “I just hope that we can keep it up now that we have got it this far,” Mr. Tennant says.

Margaret Coulter, wife Of James McNiece, a veteran of the War of 1812, is among those who are buried in the Clayton Methodist Cemetery.

In Memory of the Very Few–Adamsville Burial Site

The Oldest Cemetery in Drummond

So Who was Buried First in the Franktown Cemetery?

The Forgotten Cemetery at the End of Lake Ave West 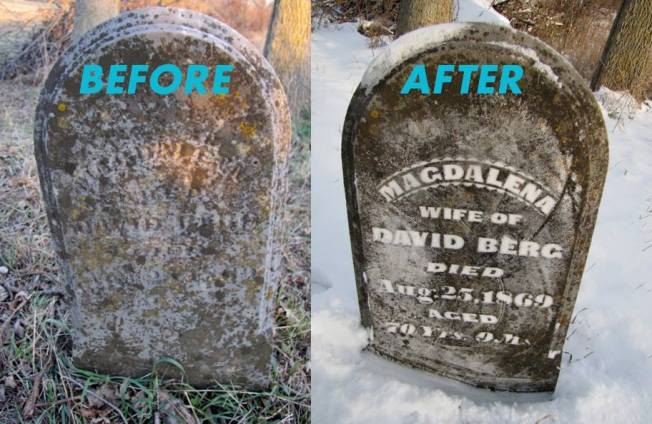 Shane Wm. Edwards, president of the Carleton Place Historical Society, sent me this tip today from Char Spinosa who posted it on the CanadaGenWeb Cemetery Project Facebook page. As it is hard to share a link on Facebook with millions, I have put it here.

Just wanted to share this and give you permission to use the photo and the instructions.. its an awesome way to be able to see what is on a very old headstone without causing any damage and the results are instant, best of all you can capture it in a photo!!

Using just snow, get a good handful, start from the bottom and work your way up by pressing the snow into the area where the information is you want to retrieve, gently wipe away the excess.The best snow is the heavy, wet packing snow, it sticks great!

The results speak for themselves. Gluck and freely share!!

Author’s Note–Please respect the headstones and don’t use sidewalk chalk!