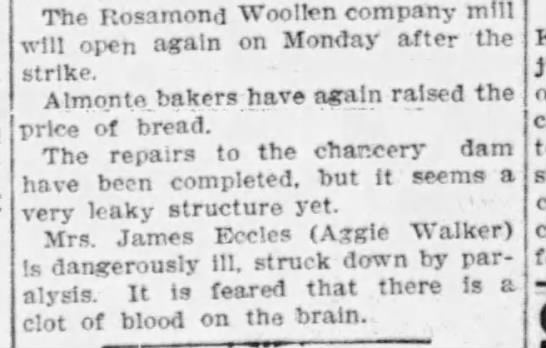 Today the Victoria Woolen Mills stands in business section of Almonte at the corner of Bridge and Mill streets. It is an unusual five-sided, five-storey high stone structure. A provincial historical plaque commemorating “The Rosamonds of Almonte” stands outside the building.

Take a walk behind the mill, following the path beside the building and next to the parking spaces. Immediately one notices the spectacular view of waterfalls, rapids and the limestone rock over which the river tumbles. Look closely and you’ll see the Chancery Dam, Almonte’s oldest structure, dating from the 1820s. This wooden dam was completely submerged in spring but in summer it held water back to the benefit of mill owners upstream, resulting in endless lawsuits with those operators below.

In 1869 Rosamond employees were criminally prosecuted for destroying 60
ft of the Almonte Chancery dam in a case that became known as Rosamond vs. Forgie. James Forgie died at age 83 in 1916  and owned 73 Little Bridge St.  in Almonte. (Mississippi Mills)

Rosamond returned to Carleton Place for two years, operating there for a short while,
and then came back to Almonte in 1836, purchased the present Rosamond property on the North end of the Island, and proceeded to demolish the “Chancery Dam.” This of course would turn the water to the North Channel, and impair all powers adjoining Mill Street. This intolerable situation brought on the famous lawsuit known as “Forgie V Rosamond.”

Forgie owned the old Penman property (now the site of the new Post office) and of course he was out of business if the Mill Street power owners could not maintain the “Chancery Dam.” This suit was a “class action” by all the Mill Street powers. Rosamond
lost this suit and another later on over the same dam.

Further down from the “Commercial House” was a vacant lot. This may have been intended for an extension of Charles Street, which now exists only on the Easterly side of George Gomme’s property. Crossing this vacant space, to the present location of “Harry’s Motors,” was a small building occupied by Robert Drury, a saddler and harness maker. He was one of the several who had “lately removed from Lackey’s Corners” there and “now expects to meet his old friends and make new ones” in Almonte.

From there down there were but two buildings – the Shipman property and James Wylie’s store (above mentioned). Around the corner at the turn to the bay (Gemmill’s Bay) was the first residence of James Rosamond in Almonte. This James Rosamond was born in Carleton Place – his father Bennett Rosamond came to Carleton Place from Ireland. And Bennett Rosamond, known to many present old-timers, was the grandson of the first Bennett Rosamond, the first Rosamond in Almonte, started in the woollen business here close to the site of the Shipman gristmill – across the street from the Public Utilities Commission property. The property was owned by his father Bennett Rosamond (the first) and was sold by him in 1834 to John Baird, with the stipulation that Baird was to have all the benefits of the “Chancery Dam” to run his woollen mill. After selling, Rosamond returned to Carleton Place for two years, operating there for a short while, and then came back to Almonte in 1836, purchased the present Rosamond property on the North end of the Island, and proceeded to demolish the “Chancery Dam.”  (Documented by Fran Cooper) 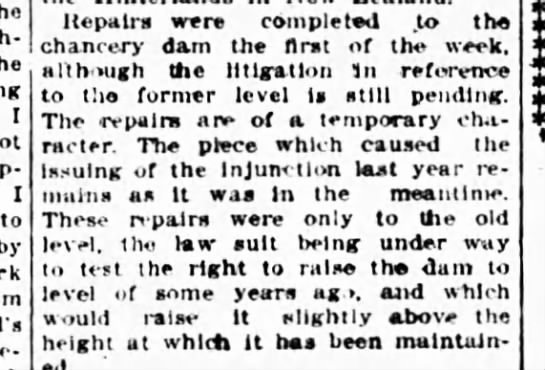 The “Chancery Dam” is really a historic edifice in the history of Almonte, although it is under water most of the time. You may still see it to the North of the bridge below the Dairy property. Waterpower was a matter of life and death to the early industries. There was no electricity in those days.  (documented by Fran Cooper)

Past Parables of the Penman Woollen Mill

Reports of Cases Adjudged in the Court of Chancery of Ontario …, Volume 26

Rosamonds – The One Carleton Place Let Get Away

Swimming at the Dam, St. James Park and Other Things

The Power of the Mississippi River Dam in Carleton Place

On the last day of December in 1894 on Saturday afternoon Mr. and Mrs. Graham Forgie that lived on the 11th line of Ramsay, were driving home from Almonte. The team became unmanageable as they began their journey and finally ran away when they were on the outskirts of the town.

During the latter half of the 1800s, Ontario roads were in a serious state of neglect and deterioration. Historians call this the “dark age of the road” where roads were being uploaded and downloaded among levels of government. Roads were opened, roads were abandoned. But this would begin to change in the 1890s—when the first automobiles appeared

Mr. and Mrs. Forgie were thrown out of the buggy on a fence. Mr. Forgie escaped with a few bruises, but Mrs. Forgie was injured badly. Her breast bone and several ribs were fractured, and she was unconscious for some time. She is still in a serious state, and suffers so much that the poor woman was kept almost constantly under the influence of morphine. Dr. Hanley, who is attending Mrs. Forgie, says she is seriously injured, but is doing as well as could be expected They were also members of the The Ramsay Free Church and the congregation is praying for her.

Did you know the Forgies also owned 65 Mill Street? See below.

These people seceded from the Church of Scotland, the Auld Kirk in 1845 and in 1846 built the Free Church, a large frame plaster cast Church on Lot 15 West Concession 8, across the corner from the Auld Kirk. The church was destroyed by fire in 1926. It had been used as a barn. The manse, a white frame house still stands and was long used as a farm dwelling. In it Dr. Robert Tait McKENZIE was born and later it was the dwelling of Mr. & Mrs. Wm. ALLEN, Mr. David WILSON and Mr. & Mrs. Kenneth McGREGOR

History: This building was built in 1873 By James Graham Shaw Forgie (b1833 d1916). The Forgies were a prominent Almonte family at the time. James was the fourth of thirteen children born to Graham and Ann Forgie, both of whom had emigrated from Scotland. James G. S. Forgie married Isabella Thomlinson (his cousin) on May 7, 1855. Isabella passed away in 1907. He married his second wife, Georgina Gray Smith in 1911. James G. S. Forgie bought Pt Lot 19A on which 65 Mill street stands, in 1867 for $3240.

There is evidence to suggest that the building was built in two parts. The recent renovations revealed bricked-in doors and windows (the arched bricks that would have gone over the tops are visible) and the foundation is also at a different level. The

western most half was built first. Evidence also suggests that at the time that it was built, the western most wall was an exterior wall which is true because the adjacent building, 61-63 Mill was built in 1875. James G. S. Forgie owned several other properties, among them the old Penman woolen mill on Mill St.

In 1869 Rosamond employees were criminally prosecuted for destroying 60 ft of the Almonte Chancery dam in a case that became known as Rosamond vs. Forgie. (see story

below). James Forgie died at age 83 in 1916. That year his widow, Georgina and son John Graham Forgie (a lawyer, born 1862 in Almonte) sold the property to the Nontells.

In the twenties, 65 Mill Street was part of the “Nontell Block”, referring to the family who owned it. Isaac Nontell (b1865) and his wife Hattie had three daughters: Pearl, Iva, and Olive. Pearl was born in 1894.

In his essay Almonte in the Twenties, Almonte historian Earl Munro wrote that the building contained a cafe and a store run by O’Kilman’s (subsequent owners of that cafe were George Blickman and later Mr. Evoy). Apparently the Nontells lived in one of the two second floor apartments. On the top story a long hall ran the length of the building with a row of rooms facing the street and another at the back, mostly rented by millworkers at a cost of $1.50 per week. Louis Peterson, the renowned Almonte ice cream maker, rented there too. In 1956 The Nontell’s heirs sold 65 Mill street to Lloyd North and his wife for $14300. Lloyd North was a town councillor. He died in 1968. There were various subsequent owners in the later part of the 20th century. Stephen Brathwaite, Marc Lefebvre and Peter Egan bought it from the Lefebvre family who owned V&S. (Stedmans) 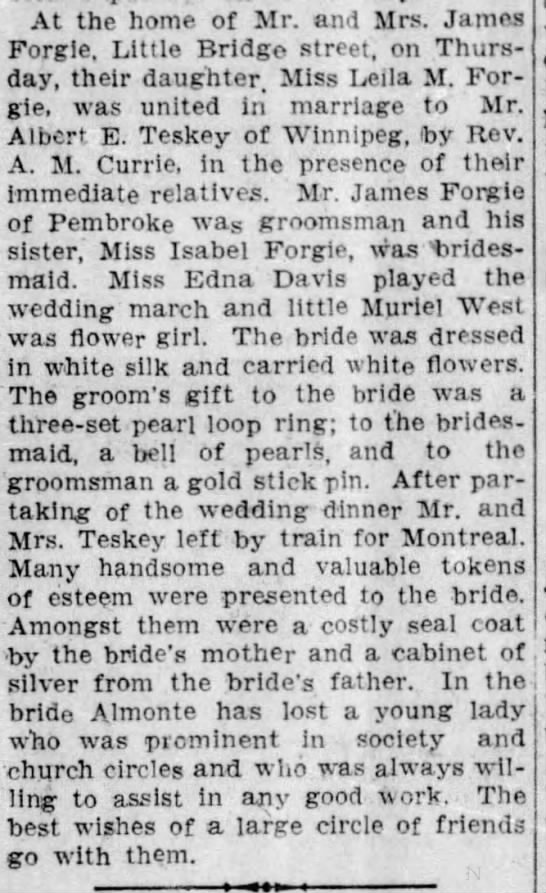