I keep telling the story over and over that as a 14 year-old girl in Cowansville, Quebec I fought to have 6 homes of historic nature not torn down on the Main Street. My father was a councillor at the time and was not impressed with his daughter speaking at the town hall meeting, but today many regret the loss of these grand old homes. Once you tear something down, it just can’t come back.

Unfortunately, now many of the oldest and most interesting homes are slowly disappearing due to lack of interest in their preservation. I have a feeling that down the line that only locations that have been deemed architecturally significant are going to be safe from the wrecking ball. So what if a building isn’t beautiful?  Why are we tearing down the brownstones and old brick farmhouses that are now part of our inner cities and towns just because they are not significant?

Many thanks goes to Andrea Ross from Ottawa for documenting this. The fact she took initiative and rescued important artifacts from the building is outstanding. These tear down trends in my personal opinion are forgetting that older buildings are physical representations of our area’s history and culture. They attract tourists, and even town or city dwellers who might like to take a scenic walk or drive to see some of  these old buildings. I still think people want to live in an area that has character with buildings that are memories from our past and attractive accessories to local businesses.

I’m sure some of you are thinking that this all sounds like an older generation writing about holding on to antiquated thoughts and privileges. There is no doubt that an aging building poses a unique set of challenges, and it’s great when you can retain a building; but it’s not always possible for those even with deep pockets. As  George Pope Morris once wrote “Woodman, Spare that Tree!” I am writing in defense of perfectly good buildings that are razed to make way for new development, and when I see things like Andrea did; I have to document it. Even she could not spare the tree, but she certainly saved some branches.

Thank you Andrea from the bottom of my heritage heart

In Memory of the

This written opinion is of that of the writer only, Linda Seccaspina.

I have documented historical mentions of the Holiness Movement Church below. If you wish to read about the Hornerites-

The Holiness Movement Church was a sect started by Bishop Ralph Cecil Horner (1853-1921) in 1895 when he broke with the Methodist Church. The membership of the sect was drawn largely from rural people in the Ottawa Valley but the headquarters was in Ottawa, which oddly furnished very few members. To outside observers, the services conducted by Bishop Horner appeared to be very noisy affairs. The act of prostration, which led to the unflattering name of “holy rollers”, was for Horner proof that God was changing the seeker’s life from inside out.

Thank you to Elizabeth Edwards of Carleton Place for sending photos of her Mother, Margaret Edwards, family. We love family photos- so please send them in.

Elizabeth Edwards– This was my granny as a baby and she was born in 1913. Hermione is my moms mom.

🙂 (Margaret Edwards) Hermione’s maiden name was Newlands. Her father owned a hardware store and apartment buildings on 5th Avenue in the Glebe. The building is now home to the store, “The Papery”.

Elizabeth Edwards—My great grandmother with her children; Grenville (the boy), Hermione (taller girl in the back- my granny) and Margaret (my fiesty great aunt)

Elizabeth Edwards–My granny is on the left with my great-great auntie belle who was visiting her from Scotland. This is outside Granny’s family home on Fifth Avenue in the Glebe. She moved to Carleton Place when she was in her 80’s to live on our street to be closer to us. granny lived in her home, by herself, until she died at the remarkable age at 90. She lived beside the Mr and Mrs Barker when they lived on Sarah Street. 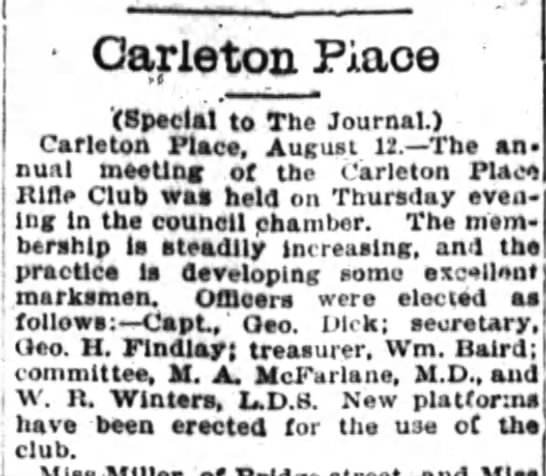 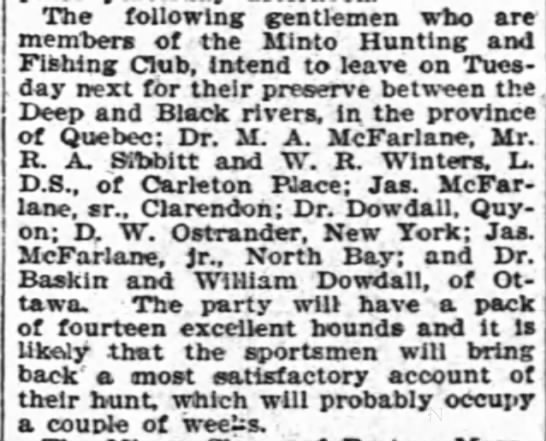