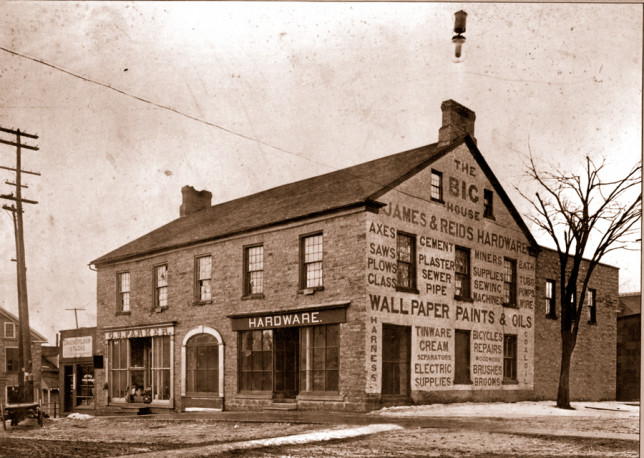 Perth Remembered-This building is situated on the corner of Gore and Herriott Streets with James & Reid’s Hardware and G.B. Farmer’s Boot and Shoe Store beside. The Royal Bank is located in this building today.

A few weeks ago it was announced by us that G.B. Farmer, boot and shoe merchant, had dispensed of his business and stock and that on the 1st of October he intended to retire.  Mr. Farmer, when he gave up the business, had been in business for over half a century, having started in a little building on Gore Street which stood on the back of the little river, long since torn down, the site of which is now covered by the south east corner of the Code block; this was in 1872.  Before making his parting  hour to the public, he was able to say that on the 30th September that he was the only one left of those who were in business fifty years ago and had continued in it year after year up tot eh time of his retirement.  In 1867 he commenced to learn the business with the late David Holliday who kept a shoe store in a building where the public library now stands.  Mr. Holliday having opened a branch at Arnprior, at his request G.B. Farmer went up there in 1869, where he remained until the fall of 1871 when he returned to Perth to attend school with a view of taking a university course. He went to school to Dr. Thornton for six months but circumstances prevented him from carrying out his desire so at the end of the school term, he commenced business as stated above.

From his pioneer venture in the days of his boyhood, for he was only 20 years of age when he faced the world in this way, he built up a large and flourishing trade, second to none in the county, and excelled by few in the province outside of cities.  This was done by faithful and diligent devotion to business and by his natural urbanity as well as business capacity.  He has seen the boot and shoe trade in the world change from a mere merchant workshop where “home made” alone could be had to conditions at present where the products of big factories fill the shelves and where “hand mades” are a curiosity.  But Mr. Farmer has been more than a man of business.  For some years he was an active and competent member of the Board of Education.  To mention the names of those who formed the board at that time shows how passing we are.  They were Dr. Kellock, F.A. Hall, R.J. Drummond, Fred Mason, J.M. Rogers, John A. McLaren, Dr. Munroe, W.A. Moore, Charles Meighen, Judge Senkler, E.G. Malloch and G.B. Farmer.  During his time on the board, C. Rice retired the secretaryship and Mr. Jamieson was appointed.  The clerks also owe Mr. Farmer a debt of gratitude for the early closing of stores as he and Mr. Drummond, then manager of the Bank of Montreal, canvassed the town for three years before obtaining early closing for two nights in the week and that for only two months in the summer.

He has always taken a lively interest in the welfare of the boys of the town and many men are now filling positions of honor and trust in the world and can look back with thankfulness for the help and encouragement they received from him.  He was also a fearless and consistent advocate of prohibition when it was not so popular as it is today and can tell many a story of days of battle.

We understand his successors Messrs. Smiley and Thomson are both practical shoe merchants.  Mr. Smiley successfully carried on a similar business in Shawville, Quebec for a number of years and Mr. Thomson was for years in one of Ottawa’s large shoe stores.  He is a returned soldier and while overseas in Buxton, England after the war he took a course in Orthopedic Gymnasium in connection with the Buxton Hospital; he is a most competent shoe fitter.

These Boots Were Made for Walkin’ 1905