Perth Remembered— Photo taken outside James Brother’s Foundry 1910. Shown here are W. Bates and D. Mayall on a cart with a shipment of sleighs from James Brothers

The machines, gambling devices. Worth many hundreds of dollars were seized in a series of raids on various business places in the three towns several weeks ago. Since then they had been stored at Police headquarters here. Crown Attorney W. W.Pollock, of Carleton Place, and County Magistrate J. T. Kirkland, of Almonte. were in Perth for the smashing ceremony, at which the odds were undoubtedly against the machine. 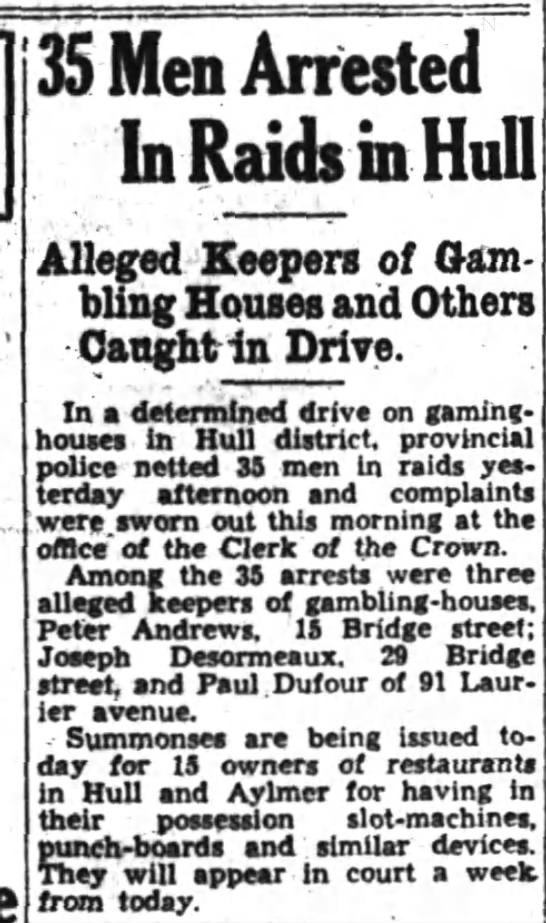 1910-Canada’s Criminal Code is amended to allow pari-mutuel betting on horse races and temporary games of chance if profits for charitable or religious purposes, or at agricultural fairs.

In 1934  they began a campaign of ridding the towns of slot machines.

Pinball Was Corrupting Our Children in Lanark County

The slot machines of the 1930s were designed to be quieter and these machines were called the “Silent Bell.” Of the many improvements that were done to slot machines over the years, an important development was removing the noise from the slot machines. Probably due to the fact that they might be found out by local authorities. So the Silent Bell of the 1930’s was the answer to local illegal gambling spots which was just what the name proclaims – silent!

The double jackpot was introduced as the new payout system, which meant that players could hit a jackpot one after the other. Themed cabinet designs were introduced to make the machines look more appealing to players. These themes included the War Eagle, the Lion Head, the Roman Head and the Castle Front.

The gooseneck coin slot which had become the norm was changed to a different system, in which coins could be seen inside the slot machine moving in a row. This allowed the managers to see that real coins were in fact being used while at the same time improving the look of the slot machine. However, I guess that Silent Bell wasn’t so silent after all.

In January of  1935 the Almonte Gazette reported that fines of $40 and $33.40 costs with an alternative of two months in the county jail were penalties handed out, Wednesday, by Dr. J. T. Kirkland, district magistrate. It was a sequel to charges brought against thirteen businessmen of Lanark County who had allowed the operation of slot machines on their premise?, Only two charges were brought against an Almonte businessmen, the remaining eleven being divided between Carleton Place and Smiths Falls.

Perth Courier, November 13, 1896–R.J. Illingsworth, once of Carleton Place, was shot through the heart and killed instantly on Oct. 30 by a man named T.S. Gardner at Devil’s Lake, N.D.  The two had an altercation about a gambling transaction.  Both were prominent citizens.

Perth Courier, Feb. 6, 1964–Snow Road–A side light of the big picnic might be mentioned as it reflects credit on the Odd Fellows as guardians of public morals.  A few visitors who were interested in making a less than honest dollar were ordered from the grounds with their gambling devices.  They continued business by the road side near the K & P station but with fewer patrons.

*In Carleton Place in the early 1900s there was a shooting in one of the rear rooms of the Mississippi Hotel. It was said there was a disagreement between two gamblers in the back gambling room

*In 1874 the press reported that the Council of Carleton Place have passed a by-law prohibiting the keeping of billiard, bagatelle and pigeon-hole tables for public resort in that village, under a penalty of not less than $25. The reasons for this stringent step as set forth in the preamble to the bylaw are contained in the following paragraph : As gambling is a vice of a very aggravated nature, which encourages drunkenness, profane swearing and frequently causes the ruin of both body and soul of those addicted to it, and not infrequently murder, it should therefore be discountenanced and suppressed within the Corporation of Carleton Place.

It is reported that Mr. J. Strang, foreman in Frost & Wood’s foundry, Smith’s Fails, recently purchased a tenth share in a ticket in the Louisiana State Lottery and made a lucky strike. The ticket drew $150,000 and Mr. Strang gets $15,000.  January 1887==Read the Almonte Gazette here

Later in the month-

A report having gone the rounds of the press  to the effect that a young man in Smith’s Falls had drawn $15,000 in the Louisiana lottery, Mr. Stewart, superintendent of the post office department, has issued a circular to Canadian postmasters in which he says that no remittances sent from Canada to this concern w ill be forwarded, as most people are aware a stringent law exists against lotteries. –February 1887==Read the Almonte Gazette here

In 1892, the Canadian Criminal Code banned every form of gambling. That didn’t last too long, though. As times changed, so did perceptions on gambling. In 1900, bingo and raffles were permitted for charitable purposes. Ten years later, horse racing was added to the list of acceptable forms of gambling. And in 1925, fairs and exhibitions were granted the right to hold gambling events.

In 1969, the Canadian government saw huge value in lotteries. So they amended the Criminal Code to allow both the federal and provincial governments to run lotteries to fund special projects. The very first lottery was held in 1974 to raise funds for the Olympics in Montreal.

Over the years, the provinces were given more rights to run lotteries, horse races, video slot machines, and casinos. Today, you can find casinos in almost every province in Canada. And over the years, they’ve become huge attractions for people who love to gamble and be entertained.