Because of the proximity of Almonte and Carleton Place, excellence of the highway connecting them and consequent density of traffic induced thereby, a practice has grown -up in both towns that is a perfect nuisance to motorists and to people residing on connecting links of the highway in Carleton Place and Almonte. We refer to the constant demand for rides that comes from a group of young people living in both towns. The Almonte outfit hitchhikes its way to Carleton Place in the evenings and begs on the comers of that town for a free ride back.

The Carleton Place nomads work their way here in the evenings and pester motorists to death for a return trip. It wouldn’t be so bad if these youths behaved themselves while waiting for a chance but truth of the matter is they spend their time singing ribald songs, arguing among themselves and cursing every motorist who refuses to pick them up. We presume the Almonte crowd carries on the same way in Carleton Place. It seems about time action was taken to wind up the practice of purposeless hitchhiking between these two towns.–Sept 1934– Almonte Gazette

An insidious system or practice has crept into our secondary and high schools during the past decade. We refer to the prominence given to certain types of sport, particularly rugby and hockey. These sports are splendid exercise if played in moderation but when they become a fetish it is time to call a halt. It would almost seem as though we were affected with a virus from our neighbour Almonte. These sports, physically, only enjoyed by, a selected few, dominate the conversation and thoughts of the pupils in general to the detriment of academic instruction, which in all said and done is the paramount objection of secondary and high schools. Sept 1934-Carleton Place Canadian

Darlene PageClarence waugh is the coach my grandfather better known as barney and aunt tootsie (Delores Agnel) on the end right standing. My Aunt gave me this picture she said it was the first all womens team . My aunt is about 14/15 there and she was born 1930 so 1946 ish I would guess .

Llew LloydMerdy Armstrong deserves tons of credit for introducing the house league inter mural team concept to C.P.H.S. Each house contained students from grade 9 to 13. It was a great moral builder and helped bring the school together as one unit.

Mr Basil Flynn. A great neighbour who was very kind to us William St kids in Carleton Place

Basil is son of John Flynn and Barbara Hudson. He died in 1998. He was married to Mary Downey who was born in 1907 and the daughter of John Downey and Velma Way of Carleton Place.

Margaret Martin— Basil was a wonderful, kind caring neighbour to everyone living near him on William St.

Matt Thrasher– Lots of fond memories of Basil. He was my grandparent’s neighbour. He was a great neighbour and friend to them. And wasn’t afraid to tell me off when I was up to no good

Krista Lee- That is what I remember most about him was he missing a thumb…he told me his family was so poor that they made the kids stand in the garden as scarecrows and one day when it was his turn a big crow flew down and bit off his thumb.. I was amazed!!

Chrissie Lancaster Remember him well he used to come up to our cottage all the time. He would buy us chocolate bars and put them in a brown bag and we would put our hand in the bag and what we grabbed is what we got. He used to drink with my Dad until he quit. Lots of memories with him and his wife Mary till she passed.

Wanda Lee-Morrison– Basil was a kind and funny man

Joanne Taylor We lived across the road from him when he passed away in the ice storm he was a really nice man.

Basil on the right helping pour the foundation at the 262 William st renovation in the early 80s.–The photo below is 262 William prior to renovation. The white geese on the river behind Basils were brought there by Basil I’m pretty sure.

A shot from the back..

Different angle but this was after a couple major renovations..

Janet MacDonald
Thank you for posting these comments and story about Basil Flynn and Mary Downey. We do not know much about either of them. John Downey’s parents are my 3x great grandparents. John’s brother, Andrew (my 2x g grandfather) left Ontario in the 1880’s and moved to Manitoba. John’s brother, William (Autumn’s 2x great grandfather) moved to Saskatchewan. My friend/relative and I have been trying to find out what happened to Mary for awhile now. We were very happy to hear that her life became happier after all her tragedies in the 1930’s. Does anyone know when Basil and Mary were married? We would love to hear more about Basil and Mary. They sound like wonderful people. Basil sounds like quite the card.
Thank you again for posting these wonderful stories of Basil and Mary.
Janet and Autumn

I am fairly sure this is John Downey, 1843 – 1919.  He was also a shoemaker and lived in Huntley.  I believe this is his first wife, Margaret Dorning.  Margaret died in 1900.  When John married Velma Way in 1903, he was living in Carleton Place.  John and Velma had a daughter Mary in 1907.  Mary married George Edgar Swinburne in 1926.  Their two children, had both died by 1932 and it appears that George Edgar had left by 1930.     It was very satisfying to find out via your site that Mary had married to Basil Guy Flynn and would have had a happier later life.

Thanks for this great service of connecting people and information.

Autumn Downey,  related to Janet MacDonald who corresponded with you about Mary and Basil. 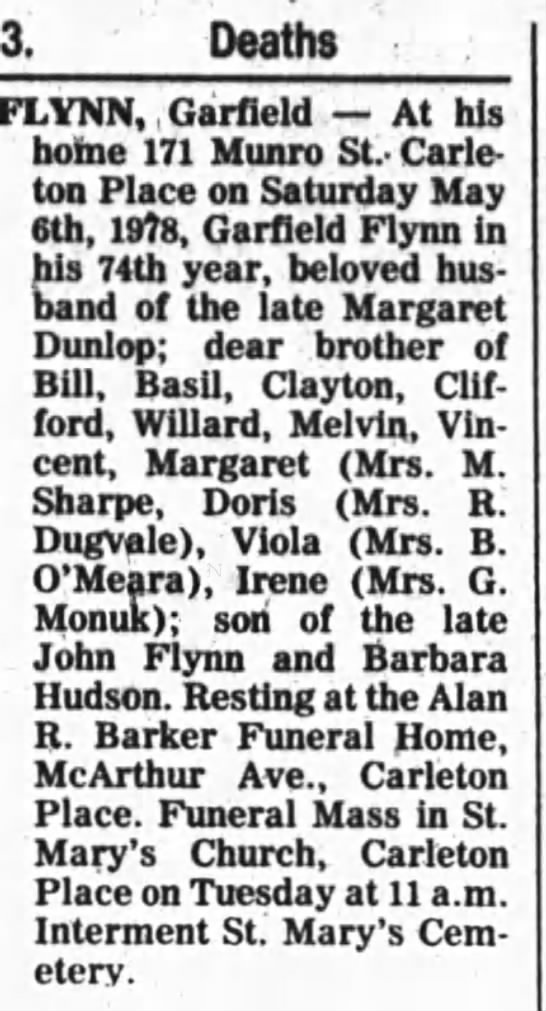 Some of the Carleton Place Local Lads- Flynn Costello and Cornell

The Day the Cheque Company Bounced in Carleton Place

The Attic Ghost of William Street?

Where is This in Carleton Place? Chaos on William Street?