Doug B. McCarten— Were you aware Linda Seccaspina that the two funeral homes in Carleton  Place had political leanings?? It was an unspoken practice, but all Conservatives were buried from the Kelly Funeral Home and all Liberals went to Alan Barker!! I guess there were either no NDP people in Carleton Place, or they were sent elsewhere?? It was also said that you could have a “Pig” running as the Conservative candidate and still win the race in Lanark County! HAHAHAHA! It was likely true at the time!

Ted Hurdis I would have thought it was the other way around ? Pretty sure the Conservatives went to Barkers.

Doug B. McCarten Ted Hurdis not on your life! My Mom and Dad would never have gone to Barkers otherwise being the good Liberals that they were!

Doug B. McCarten Carol Ethridge after Kelly’s was gone?

Carol Ethridge Doug B. McCarten – my father was in 1977 but I’m pretty sure my grandmother was at Barker’s and that would have been around 1967 or so.

Norma Ford Carol Ethridge both our Grandparents were buried from Barkers but the others were from Fleming’s. I think it had more to do with service although I am probably wrong.

Carol Ethridge Norma Ford my memory is shot….what was the name of the other funeral home on Lake Ave….I swear every wake I went to as a child was at Barker’s. Jimmy’s was the first I went to not at Barkers

Llew Lloyd I always thought it was the Anglicans who used Flemings.

Donna McFarlane-ED and Doris Fleming were neighbours of my parents when my parents lived on the corner of Frank and Lake Avenue. I always remember Mom talking about how compassionate both were after the funeral of my sister in 1940 at 2 months and my brother in 1944 at a year and a half. Ed also ran the ambulance.

Jayne Graham My dad grew up in the house across the street from the funeral home (Cam Hughes.. parents were Harold and Cora Hughes who had the Southend Food Market on the same street). My dad drove the hearse for a short period of time. Ed and Doris remained close family friends with Doris travelling to London for my wedding in 1989. . They were lovely people

Ann Stearns Rawson When I mentioned Barker’s to my parents a long time ago, they said NEVER, As they were staunch Conservatives, now I know why!

For the first time I don’t think I have anything to add to this. I am gobsmacked. LOL 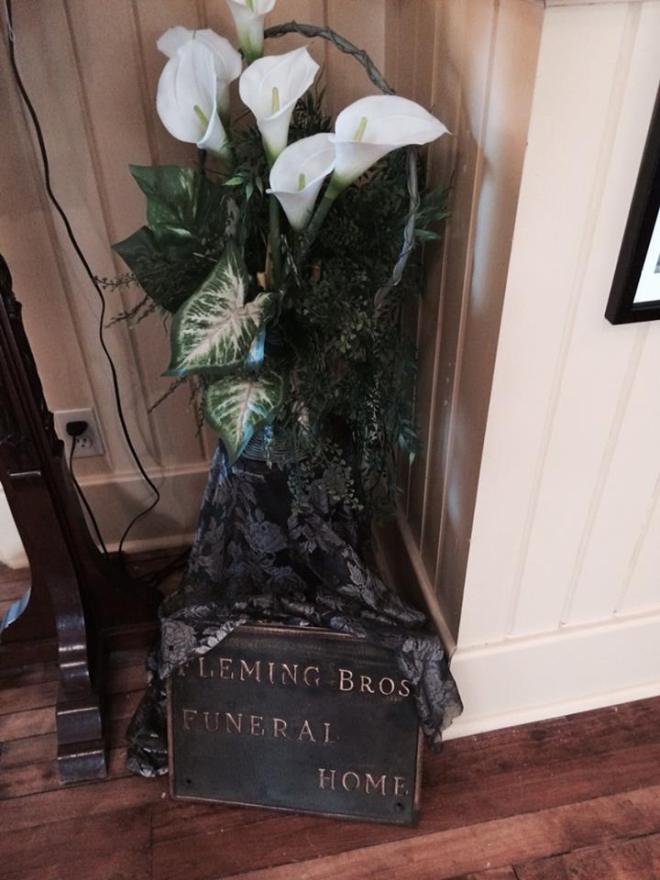 Ed Fleming was more than a qualified mortician, and he thought all it would take to open a funeral parlour in Carleton Place was a hop, skip, and maybe a coffin or two. How hard could it be he asked himself? The man from Ashton knew just about everyone in town, and had a few degrees under his belt from Ottawa and Hamilton.  But in typical small town fashion some things never change. Word flew up and down the streets that a funeral parlour might dare open. The horrors! The general synopsis was: what did Carleton Place need a funeral parlour for?

Next thing he knew, a group of concerned citizens began a petition to stop the young mans dreams of opening his business in town. However, the powers to be finally gave Fleming the green light. In all honesty, there just wasn’t enough people complaining to warrant not allowing him to open his business. In June of 1939 Carleton Place’s first funeral parlour opened and the world didn’t end. At least there wasn’t anything in the newspapers about it, and the world was here when I woke up this morning.

You have to remember there were other undertakers in town like Patterson and Matthews, and everyone had family funerals in their homes in those days. Back in the days when funerals were held at home, the only outside help which a family needed was in supplying the coffin. Since it was made of wood, it was bought at the store that also sold wooden furniture. Some people even built their own coffins, if they had the time and talent. When the family home was not acceptable, Matthews Furniture store just moved everything over and ushered everyone into an open space between the couches and the end tables.

As funerals became more elaborate, the people who ran the furniture stores branched out, to supply a hearse or the other accouterments of Victorian mourning. Fleming had a horse drawn carriage until he purchased his first vehicle. Although undertakers’ records from the last century do exist, they are rare. We begin to hear more about them in the years before World War I, and by the 1920s they became common

Eventually the modern funeral home as we know it evolved and known as a mortuary or an undertaker’s, names which modern practitioners don’t like. Ed Fleming knew all along he could do a better job than the undertakers in town and he and his wife Doris succeeded with their first funeral parlour in their home on Frank Street.

I can’t imagine how his wife Doris got the family meals prepared knowing full well the body preparation room was next to the kitchen. That year they only had three funerals, and Doris pinch hit as a nurse at the Carleton Place Hospital to make ends meet,  But, as his good reputation spread, people knew they could count on him, and his business began to flourish.

Fleming Brothers’ Funeral Home eventually moved to 18 Lake Avenue West where Tubman’s once was. Everything that has a beginning eventually has a an end. When Fleming decided to retire, he struck a deal with John Kerry who operated in Almonte at the old Stafford house and they closed the Carleton Place deal in 1972. Today, the Tubman Funeral home on lake Ave. West is closed, and the only remaining funeral parlour is the Alan Barker funeral home on McArthur Street.

Interesting to learn that the brick house on Frank Street near Lake Ave was once the first Fleming Funeral home. As a kid growing up on Frank Street in the late 1950s and 1960s I befriended and did errands for an elderly woman (Alberta ‘Bertie’ Whyte) who owned the house at the time. Bertie was a fine person who always enjoyed talking about the history of the town and families of CP and Beckwith.


She often spoke of the loose post in her front hall. When you entered her front door there were two tall posts on either side of the staircase. The post on the left was “deliberately loose so it could be removed to allow caskets to be moved in and out during funerals”. My assumption for all of these years was that it was for family funerals. Even then I was aware that funerals & wakes had traditionally been held in the family home. But now it appears to have been for a more commercial purpose. Thanks for sharing the story…