Some times it gets frustrating not finding church records or headstones for those searching their families genealogy. If one of your ancestors took a dram of Carbolic Acid or Paris Green, or charged with a felony, chances are you will have great difficulty in finding them.

Church law on suicides has never been as simple as many make out, in most cases it fell on the the locals to decide whether the body could be buried in the churchyard or not and indeed whether he would perform the funeral service in the church at the grave or not at all.

In the St, James Anglican Church cemetery in Carleton Place there are bodies buried on the outside of the fence near the road as they had been charged with a crime or committed suicide. The responsibility of deciding in what case the exceptions be made was once thrown upon the clergyman who had cure of all the souls in the parish where the suicide is to be buried.

In the year 1823 it was enacted that the body of a suicide should be buried privately between the hours of nine and twelve at night, with no religious ceremony. In 1882 this law was altered where every penalty was removed except that internment could not be solemnised by a burial service, and the body may now be committed to the earth at any time, and with such rites or prayers as those in charge of the funeral think fit or may be able to procure. It was now lawful for these to be buried in consecrated ground, although without the benefit of a religious service. It also brought to an end the tradition of driving a stake through the body and throwing lime over it.


Before 1880 no body could be buried in consecrated ground except with the service of the Church, which the incumbent of the parish or a person authorized by him was bound to perform; but the canons and prayer-book refused the use of the office for excommunicated persons, for some grievous and notorious crime, and no person able to testify of his repentance, unbaptized persons, and persons against whom a verdict of felony had been found. .

At a burial in a cemetery (as opposed to churchyards) there would have been the usual burial service (always assuming that there were mourners there to attend of course). It wouldn’t have been any different to any other funeral really, and the grave could have been in either consecrated or unconsecrated ground.

Not all ground in a cemetery is consecrated because if you think about it logically, there are burials for all different sorts of religions and creeds and it would not do for a Muslim for example to be buried in consecrated ground, or someone of the Jewish faith to be interred in such ground. These faiths usually have their own sections within cemetery grounds.

Deaths by suicide are eventually registered in the normal way however as the death is “unexpected” it will be reported to the Coroner and he will hold an inquest. If such a death occurred in your family in the past there should be some record within the coroner’s office – but not sure how long they keep the records – not all coroners keep them since the year dot!! 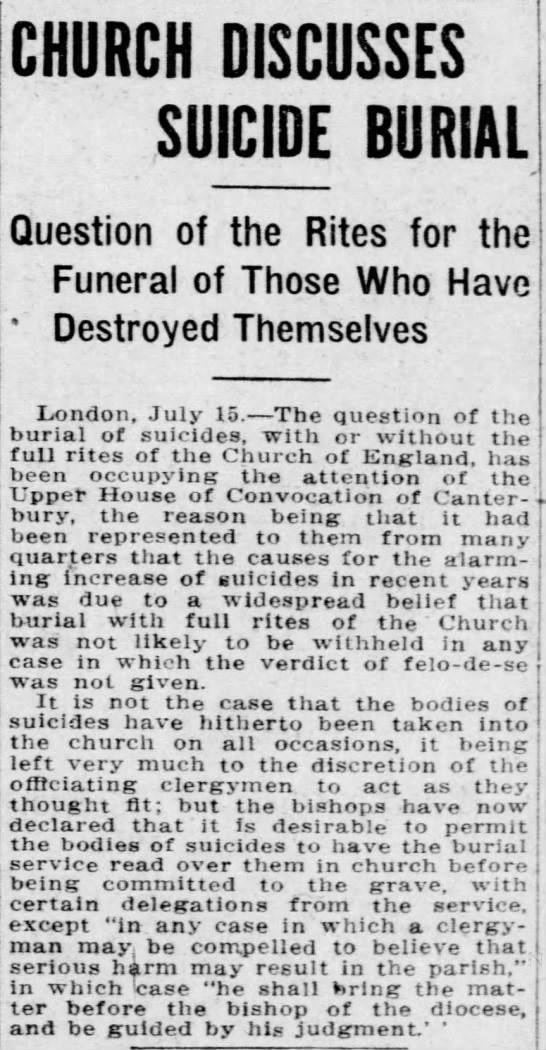 Tales of the Tombstones — The Crozier Children