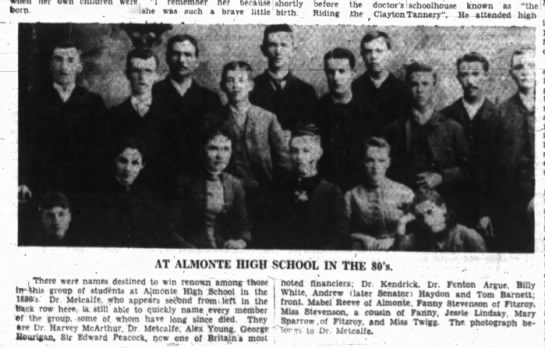 Dr. Metcalfe, who established his practice in Almonte years ago broke into the political forum in 1901.  It had been his four-year battle feud subsequent victory at the polls to achieve public ownership of hydro electric power that had turned Dr. Metcalfe’s thoughts to running for public office. He believed that his idea to consolidate all powers in Almonte on a plan where the Mississippi River’s total supply could be regulated for 24 hours per day would one day become a reality. This plan would be beneficial to Carleton Place, Appleton, Rosebank, Pakenham, Galetta. and all the falls on the Mississippi and increase the efficiency of the stored lakes

Dr. Metcalfe was mayor of Almonte from 1917 to 1919 and in 1924 and in 1929. During his terms as mayor, the streets of Almonte were paved. It took a fight in the courts before the doctor got action on adequate accommodation for high school pupils. The high school had been a building rented from the Almonte Public School Board. Through Dr. Metcalfe’s efforts the building was renovated and a gymnasium erected. The gym, he admits was his pet project, since he had always been keenly interested in  sports.

Also a great horse lover, the doctor was active in sulky racing. Dr. Metcalfe’s entries won many red ribbons at Ottawa and Toronto exhibitions as well as at local and district Fall fairs. Through the years, medicine and politics with Dr. Metcalfe walked hand in hand. He used to travel to outlying rural farmhouses on sick calls by horse. With the aid of two nurses and a flashlight he performed appendix operations on kitchen tables. The doctor helped bring more than 5,000 babies into the world. His assistant was Miss Isabel Guthrie, a niece, who was a registered nurse in Scotland and Canada. 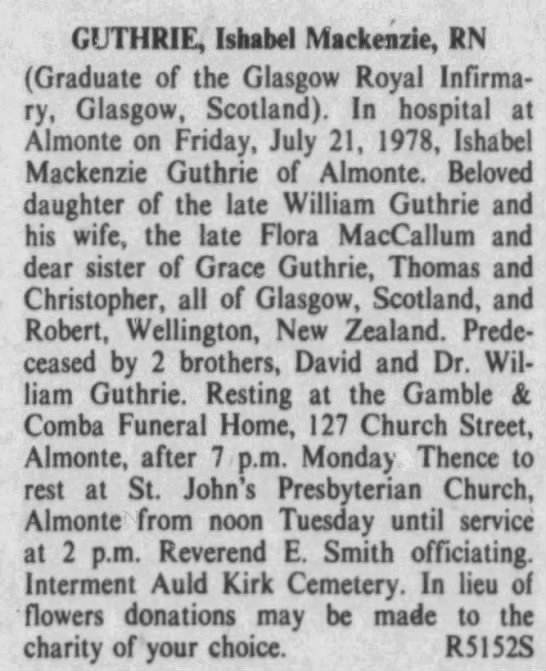 The last of a family of 12, Dr. Metcalfe was born November, 1869, on the homestead on the 8th Line of Ramsay. His parents, the late Hugh Metcalfe and Jean McLean named him Albert after Prince Albert who had stopped at their home for a drink of water shortly before the baby was born. (1860–Albert Edward, Prince of Wales, undertook a two-month tour of Upper and Lower Canada).For two years after he left high school, he taught at McDonald’s Comers, then, went to Queen’s, where he graduated with honours. He took post graduate work at the Mayo Clinic, Rochester, Minn., and then came to Almonte to set up his practice. He married the former Isabel Mitchell McCallum of St. Andrew’s, Scotland and she died in 1937. 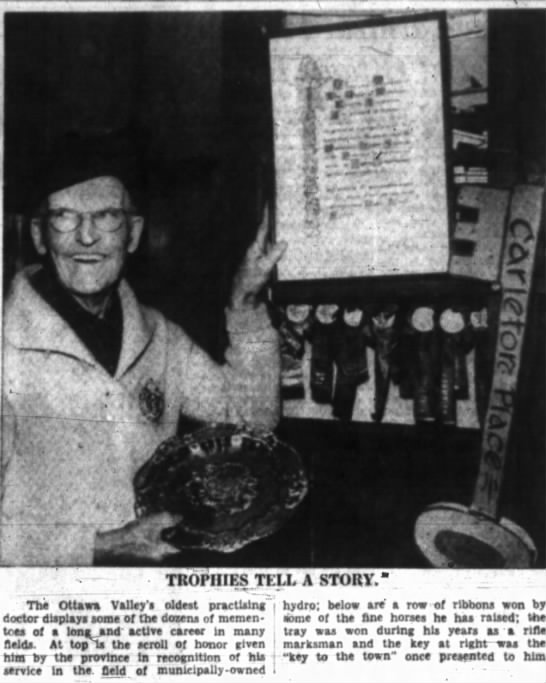 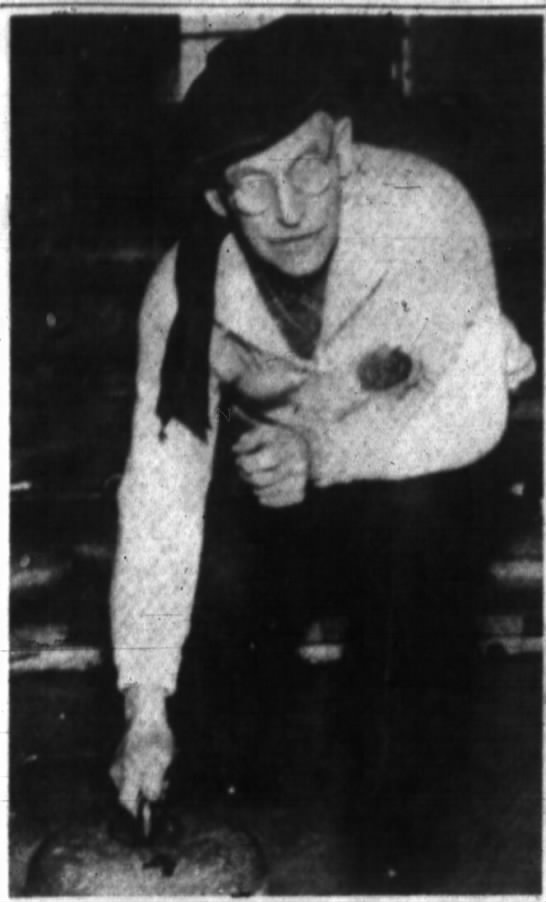 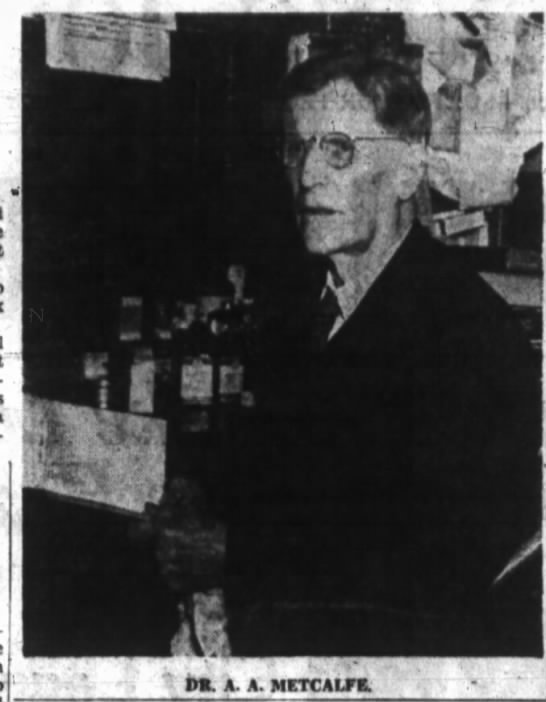 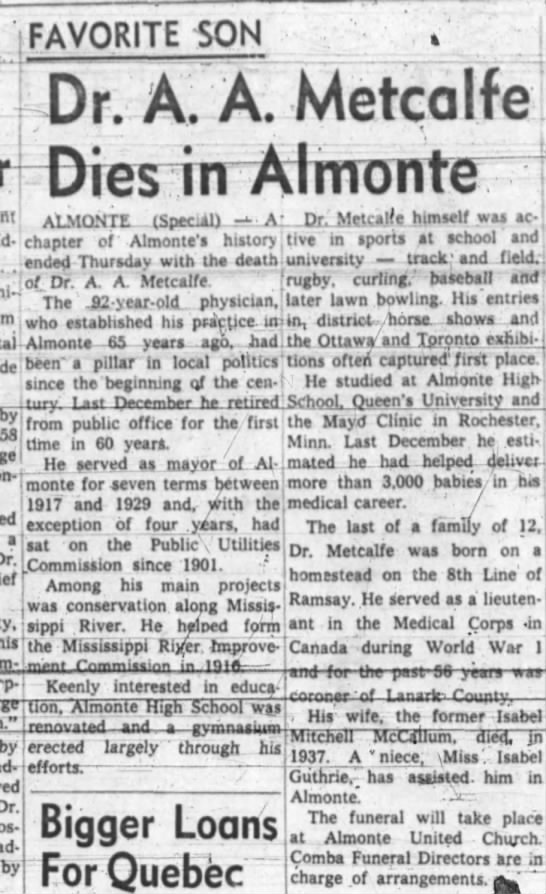 Cool old photos–and lots of things interesting to read. Also check out The Tales of Carleton Place. Tales of Almonte and Arnprior Then and Now.

In 1909 Construction of a hydro electric power plant was begun by H. Brown & Sons at the former site of the Canada Lumber Company mills, after several years of preparation of the riverbed including tailrace excavation and building of a concrete millpond dam.

In July of 1937 Carleton Place resident Lionel Bigras saved the life of 6-year-old Margaret Violet King, daughter of Mrs. Clifford King. Young Margaret fell into the Mississippi River near the hydro plant about 200 yards from the town bridge early in the afternoon. BIgras dived three times into 15 feet of water to bring the child to the surface. CPR was performed by Wilfrid Bigras, employee at the Hydro plant, a cousin of the rescuer. Doctors Johnson and James of Carleton Place took charge as soon as they arrived at the scene. The Carleton Place girl was brought to the Ottawa Civic hospital where she miraculously recovered from her experience. Sadly, her father Clifford King, had lost his life by drowning in the Mississippi Lake only a year previous. But sad to say, the story did not end there.

Tara Gesner, our beloved reporter from The Carleton Place Canadian, has sent me a picture of the medal that Wilfred Bigras received that day for saving the Margaret King’s life. Linda Gesner, her mother-in-law, still has the medal. Wilfred Bigras was Tara’s husband’s great great grandfather.  Thank you Tara for showing this to me!

Quest For Fire or I’ve Got the Power – Zoomer.