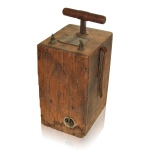 Residents of the vicinity of Youngville, below Almonte, complain that the Mississippi in that section during the past week has had on its surface a large number of dead fish of all kinds—sucker, pike, pickerel, bass, chub, etc.—the stench from which was almost unbearable during the hot weather.

The fish were killed by dynamite, and a sharp lookout will be kept for the law-breakers who thus wantonly destroy the fishing ground that has always furnished sport for the disciples of Walton. The guilty parties will be severely punished, if possible.

The Harold Kettles Series – Blowing up Beaver Dams in Beckwith

The Uni-Bomber of Carleton Place? Didn’t I Blow Your Mind?

In doing research this morning I came across a mention of Joseph Doherty from our area who had the misfortune to lose his eyesight while blasting in the bed of the Mississippi River at Pakenham. The accident left him severely handicapped, but not daunted. Mr. Doherty opened a local singing school in which he was very successful.

In fact for many years Joe led the choir at St. John’s Anglican Church (Boyd’s) in Innnisville. The ministers came to Boyd’s from Carleton Place and at one time Balderson.

I always thought my grandfather and father were spinning yarns with their dynamite stories. It seemed like it was a different and simpler time back in their day. I also vaguely recall older people talk about buying dynamite for clearing stumps or large rocks on their farms.

Was there ever a point in time when the local hardware sold dynamite to the public? Did it come with an instruction manual? In fact, until the late 60s, you could probably go to any farm and feed and/or hardware store and simply purchase it. While some would limit who they would sell it to, many would look at the license, look at you, and then make the sale. They also kept terrible records, especially for cash sales and found many suppliers had no idea as to who they had sold dynamite to.

When we built the addition on Campbell Street we hit bedrock almost immediately. Ange decided we could either get a chipper in or maybe blasting through the rock would be faster. Harold Kettles was known as someone who could blast through any rough spot in Carleton Place while holding a beer in one hand and dynamite in the other. He was known as the master!

Each week for a month Harold and his wife Evelyn would drop in after supper and sit a spell in the living room while Harold told Ange what he was going to do and how he was going to go about it. His wife was a lovely lady and was related to the Neilson family on the Appleton Side Road, and never flinched an inch while he talked about dynamiting up part of the back yard.

The more I heard about the blasting, the more I began to think that we were going to come within a skinny half inch of blowing ourselves to crap—let alone all the neighbours all around us.

There was no doubt that dynamiting was cheaper than bringing in a chipper for a week, but the more Harold “layeth the facts smack down” I began to realize we might be about to make a Three Stooges movie. It didn’t take long for the neighbour behind us to hear all the talk about the pending blasting and immediately complained to the town building inspector. Harold was shut down as quick as you could say Molson Canadian, and was none too happy about it either. In the end a chipper was brought in and maybe saved the neighbourhood from blowing to kingdom come. But, we will never know will we?

The facts come out: Thank you Jim– 🙂 Like I said-The more I heard about the blasting, the more I began to think that we were going to come within a skinny half inch of blowing ourselves to crap—let alone all the neighbours all around us.

Linda,
Part of your story was true; however, there was a little more to it. Normally, companies involved in blasting operations, use blasting matts to cover their charges. Harold was rather unique, being from the old school, and used to doing most of his blasting in the country with no houses in the vicinity , he never had a concern for perifial damage. His idea of a blasting Matt was a bucket of sand. After a visit from Harold, in his somewhat normal state of semi inebriation, to check my foundation for cracks before he began his blasting operation ( I was the neighbour behind you ) I realized ,We,being all the neighbours , could be in big trouble , if his operation was to continue. I apealed to Ange ( to no avail) to stop the ” operation”. My next option was an apeal to the building inspector and eventually to mayor Melba Barker who had the foresight to realize the likely catastrophic possibilities. As a result, Harold’s operation was shut down, but not before a visit the next morning from Harold, in a full inebriated state, wanting me to come out on my front lawn and settle the problem like men. In the end, we all listened to a full week of the chipper.
Jim

A long time ago Highway 7 was just a little bit more than a wide cow path. Nat McAllister was sent to Ottawa one day with his truck to pick up some dynamite for a job he had to do in Carleton Place. On the way back, for safety’s sake, he decided to stick to the centre of the road. McAllister was no rocket scientist, but he was taking no chances of his truck going into the ditch with two tons of dynamite.

Near the Dwyer Hill 4 corners an oncoming car stopped dead in its tracks seeing that McAllister wasn’t giving any leeway to him. The owner of the car was frantically waving for Nat to stop the truck. Nat being an obliging man stopped and was immediately faced with a tirade of what was called ‘wicked words’ ending with the man claiming Nat might have killed him.

Nat never lost a beat and said to the man,

“It would better be the car than the truck, for I’ve two tons of dynamite on that truck.”

In  the flash of an eye, the driver of the car jumped into his car and put a wide space between the both of them in a couple of minutes. No doubt the driver just didn’t want to be involved with “a whole lotta shakin going on”.

Have Gun Will Waffle – Zoomers.

Aalaya Walker was visiting a friend in St. Petersburg Monday when they decided they wanted some late-night chicken and waffles. Walker began preheating the oven — unaware that her friend, JJ Sandy, 25, was storing a magazine from his .45-caliber Glock 21 in the oven. JJSandy-yet another genius with a weapon!