Belleville School for Deaf and Dumb 1888

To Be Deaf in Former Years 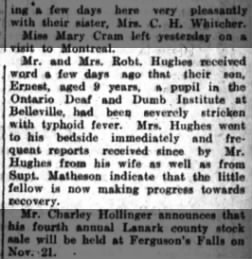 In my research I have found out that people who could not speak or hear were considered to be on a lower level from those that could in past years. In fact, in all the newspaper archives, including the Ottawa Journal, had postings in the local newspaper when a child or person went to The Ontario Institution for the Education of the Deaf and Dumb.

The Ontario Institution for the Education of the Deaf and Dumb was first called The Deaf and Dumb Asylum. In those days people that were deaf were also considered to be dumb. How horrible to be singled out and labeled. The pull of the asylum and the workhouse was strong, but many thousands of people with disabilities tried to stay in their small rural communities like Carleton Place. Can you imagine the loneliness and isolation experienced by a deaf child?

During the Second World War, the Ontario School for the Deaf building was used by the Royal Canadian Air Force for No. 5 Initial Training School (5 ITS), as part of the British Commonwealth Air Training Plan. A commemorative plaque is dedicated to the 6,664 graduates of 5 ITS; especially those who gave their lives in the air force service to their country in the Second World War.

The Ontario Heritage Trust erected a plaque for the ‘Ontario School for the Deaf’ on the grounds of the school that reads:

“The first provincial school for deaf children, this residential institution combined elementary school subjects with vocational training when it opened in 1870. Over the years, ever-increasing enrollment has promoted the steady expansion of the school’s facilities and curricula”.

The following pupils from the County of Lanark are in attendance at the institution for the Deaf and Dumb in Belleville:  Maud Culligan, of Appleton; A. Gardner of Watson’s Corners; A. Lockhart of Almonte; William Thackaberry of Carleton Place.

From the Annual Report of the Ontario Institute for the Deaf and Dumb, Belleville, issued by Mr. R. Matheson, we learn that the following pupils from the late unified counties were attending the institute on September last: