At a meeting held in the #12 schoolhouse on the third concession of Dalhousie, April 1, 1828 Mr. Thomas Scott resolved to establish the public library if everyone paid the following sums and held up the rules.

Each subscriber if they pay __ shillings shall be a member. The annual payment must be paid on or before the first Saturday of ___ for the use of the Library.

The business of the Library shall be conducted by a Committee of 12 or more. They with a president and secretary to be chosen at the annual meeting which shall be held in the #12 Schoohouse third concession, Dalhousie, on the first Saturday in March to audit accounts, to prepare a list of books from which the Committee are to make purchases of the following year, and to enact such regulations as may appear necessary.

Every controversy shall be determined by a plurality of voices, the president being allowed to vote as a member, and in case of an equality, again as President.

The Library shall attain a sufficient number of books and at one o’clock on the first Saturday of the month give out to the members in rotation such a number or volume as may from time to time agreed on by said quorum, which are no to be kept for more than 4 weeks.

The Secretary shall keep a cash book, a minute book, and a journal of the books lent out, and the condition they were in when returned if damaged.

Subscribers losing or injuring a volume shall either replace it, or pay the price of the book.

Subscribers are not to keep a volume beyond the time prescribed in article 5th, under the penalty of one shilling for each month longer kept.

Subscribers are not to lend the books of the library to non-subscribers, under the penalties of five shillings for each such offence.

The individual share of members can on no account be drawn, but may descend to his heir, or be transferred to another provided the new member be approved.

No member of the Committee to be absent either from a general or trustee meeting under the penalty of sixpence for each offence.

No subscriber shall be entitled to any of the priviledges of the library until he has paid his fines and annual contribution, unless he be from home at work; then he shall be allowed__ months.

No alteration or amendment shall be made to these Rules and Regulations, except at a general meeting.

The interior of the Dalhousie Library 1925

The Dalhousie Library was originally in a log building called St. Andrew’s Hall. For every 70 years it remained a landmark as the faithful subscribers gathered in the hall and sought to gratify the longing of intellectual hunger.

The log building had a large fireplace and all that remains now is a stump.  The building was put to a variety of uses and it was numbered as one of the early schoolhouse and it was also the first church. St. Andrew. Thomas Scott was the first president and guide of the Dalhousie Library Society from 1828-1854 when his place was taken by Hugh Hunter who held another 15 years. Other names were: John Monro, James Reid, Andrew McInnes, John J. Paul, John Cumming, William Boyd and James Park. James Park built the first bookcases at the Dalhousie Library. The boards were made out of the great pines from neighbouring hills and manufactured in a sawpit in the forest.

Every Library Day St. Andrew’s Hall was packed from morning until nightfall and members made long treks through the woods to get books for the next few months. For another 50 years or so the Library lived on. In the late 1800s the interest began to dwindle. By 1900 the membership had fallen to 12 and the books numbered just about 350. The St. Andrew’s Hall disappeared and was housed in any convenient place, at one time was above an open public horse shed.

The library exists today in the back of the Watson’s Corners Community Hall (behind the barred window that you can see near the cache), with books and artifacts from the village’s history along the original pine shelves built in the village in 1827. It contains a number of the library’s original books, including many of the 120 books stamped with the Earl of Dalhousie’s Coat of Arms and others that made the journey from Scotland to the Watson’s Corners area with their original owners.

In 1828, eight years after the original settlement of this area, the St. Andrew’s Philanthropic Society founded the first public library within the old Bathurst District. A log building, known as St. Andrew’s Hall, housed the library for many years. The Earl of Dalhousie, Governor-in-Chief of Canada (1820-28), subscribed money for its support and donated a number of books. Thomas Scott, a pioneer settler, was the first president, and among the distinguished citizens who subscribed were the Right Reverend Charles Stewart, Anglican Bishop of Quebec, and Archdeacon John Strachan, later first Anglican Bishop of Toronto. The library was incorporated in 1852 and a number of the original books are in the present community hall that was built in 1847. 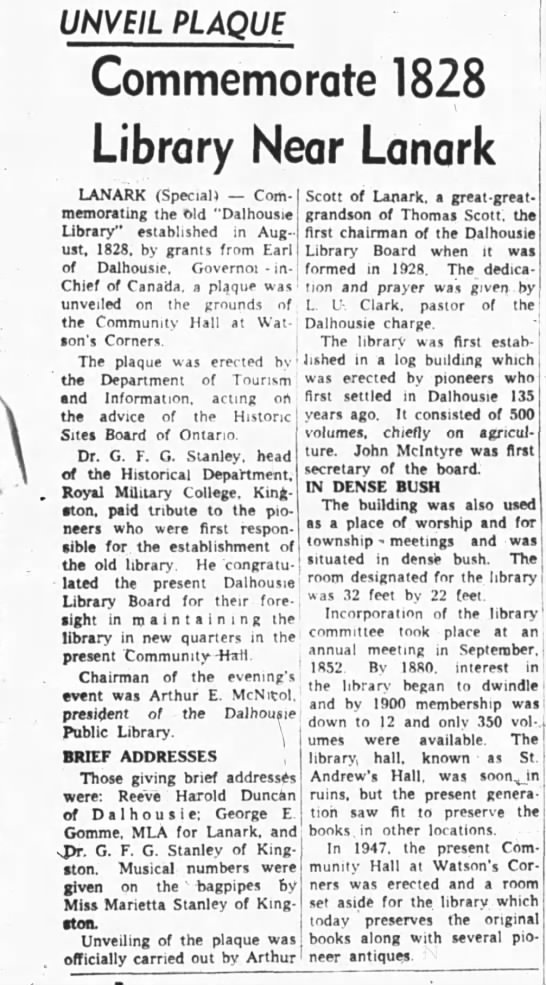 Watsons Corners:
Watson’s Corners PO appears on the Historical Atlas for Lanark County. The first to arrive were Lanark Society settlers in 1820. It was formerly known as Granny Cumming’s Corners. In 1829 St. Andrew’s Hall was erected and housed a library and served as a church and a meeting hall.

Come and visit the Lanark County Genealogical Society Facebook page– what’s there? Cool old photos–and lots of things interesting to read. Also check out The Tales of Carleton Place.
Information where you can buy all Linda Seccaspina’s books-You can also read Linda in The Townships Sun andScreamin’ Mamas (USA)

“They were Set Down in Dalhousie Township”– Effie Park Salkeld

Did They Ever Find the Kangaroo from Lanark County?

Did you Ever Hear About Hoods Corners?