You know I realized sitting at my computer that Andrea McCoy is on many of my pages but never had her own page LOLOL.. She does now that I can keep on adding to.

This is Andrea McCoy-Naperstkow from the The Lanark Federation of Agriculture and I have known her for two years online. Wednesday was the first time we met and hugged each other hard. It’s like I have known her forever. I also got lost in Perth (who does that?) and she came to rescue me. You might remember her mum Inez McCoy who used to write for The Canadian. I now have a very special friend for life.

She is also mistress of the radio on BARNYARD BREAKDOWN on Valley Heritage every Friday at 12:05 after the news 98.7

“You Can’t Ship a Tractor with Soil” but…. Photos of The Lanark Federation of Agriculture Farm Tour

Anne McRae Dairy Princess — Where is She Now?

Bowling Queen of the Ottawa Valley 1962

A year ago, Jean Duncan would never have dreamed of entering a beauty pageant or vying to become Dairy Princess of Lanark County. “I would have died at the thought,” says the shy 18-year-old. Today, Jean’s warm smile and bright eyes have become an accepted fixture at parades, agricultural banquets, award nights and picnics across county. Like apple pie and roast turkey, the appearance of the Dairy Princess is standard fare at almost any large agricultural get-together. And if this year’s “ambassadress” of the dairy industry still quakes inwardly when called upon to give speeches to large groups of strangers, she masks her nervousness well.

In an age that has probably seen too many beauty pageants, the institution of the Dairy Princess has hung on where other pageants have died of apathy, criticism, or controversy. The institution has a long history the first Ontario Milk Maid was chosen in 1953 and is still well received by the farming community, the public, and the girls themselves who each year vie for the title.

By contrast, other pageants that once attracted large crowds and good competitors had to abandon their contests because there aren’t enough entrants. Almonte cancelled its pageant last year and even now, local municipalities are deciding the fate of the Miss Eastern Ontario Pageant which has suffered lately from lack of entrants and sponsors. The real reason the institution ‘of the Dairy Princess has survived where other pageants have failed, says Jean, is that the Dairy Princess is not just a beauty queen. She has a specific and useful job to represent a particular group, the dairy farmer. Jean says the idea the princess has a real role to play is made clear at the very outset, even in the way the girls are chosen at the annual Dairy Princess Ball which usually takes place each year in July.

There are no bathing suits or talent spectacles. However, each contestant must be single, aged 17-22, and have lived or worked on a dairy farm for five years. She must also know how to milk a cow, although she’s no longer asked to demonstrate her skill during the pageant. Jean was asked about her interests and hobbies. The judges take note of the girl’s appearance and ability to present herself in her “ambassadorial” role.

Looks are still important, but brains and personality mean a lot too, says Jean. In the words of organiser Liz Hilliard: “The job requires more of the girls and therefore the ex-experience tends to mean more to them.” This point is also brought home, says Jean, during special training sessions princesses attend during the year they reign.

Sponsored by the Ontario Milk Marketing Board and usually held at the Kemptville College of Agriculture, these workshops gather princesses from nearby counties of eastern Ontario there are 45 across the province. The girls are given tips on how to present themselves and how to walk and talk like “ladies”; but they’re also given advice about such practical things as how to write a speech or conduct a seminar. The girls also get lectures about the milk industry and the milk marketing board and how it works. What does a Dairy Princess actually do apart from look pret-ty? The job, explains Jean, is basically public relations. The Dairy Princess’ purpose is “to strengthen the ties between the dairy industry and the public.” She in effect brings the goodwill of the industry to the many public functions she attends: fairs, agricultural meetings, banquets, parades and other special events involving dairy farmers.

Jean also visits women’s groups, church meetings and schools, where she leads seminars, slide shows and demonstrations about the dairy industry. As part of her role, she dresses formally and wears the official insignia of her title, a tiara, sash and pin. Although Jean is expected to have a good basic knowledge of the milk industry, she says she is not supposed to get into scraps over government dairy pricing.

Jean says the part of her job she enjoys the most is talking to school children, a duty that will keep her travelling across the county for several weeks this spring. “The kids are usually a lot of fun and it’s a useful way of getting them interested in the nutritious value of milk,” she says. “A lot of children who live in towns don’t know how a cow is milked or how to make cheese.” The promotion business is a tiring one and, apart from a few expenses and a collection of gifts presented at the time of her selection, the rewards of the job are almost entirely those of personal experience. Apart from the copy of the tiara that she will be able to keep when her job ends this summer, Jean is getting few perks for her efforts which take several days and nights out of each month. She says she has no regrets, however, and is grateful for the experience. “I’ve travelled all over the county and Eastern Ontario and I’ve met a lot of nice people,” she said. On the light side, there have been lots of teasing and compliments like the one from the ‘man who came up after one banquet and said to Jean with a leer: “Well, I’d drink milk just to be with you.” Jean feels her new role has also brought her a lot of confidence, which will no doubt stand her in good stead in years to come. Right now she’s planning a career in another “people oriented” field the travel business.

Jean is carrying the full load of Grade 13 subjects at Arnprior High School where she also takes part in softball and track and field; she also helps out on her family’s Holstein dairy farm near Pakenham. She also works part-time as a waitress at in the village. In all these activities, Jean says her family her parents, David and Dorothy Duncan, and her three brothers and two sisters are a big help. They give her a lot of moral support, drive her to banquets and even help her write speeches. Jean has found it very reassuring to find at least one familiar face in an audience of strangers.

The Dark World of the Miss Civil Service Beauty Contests

Andrea McCoy said–the Renfrew County Dairy Princess is Eileen O’Gorman. The occasion I do not know but I am thinking summer of 1977 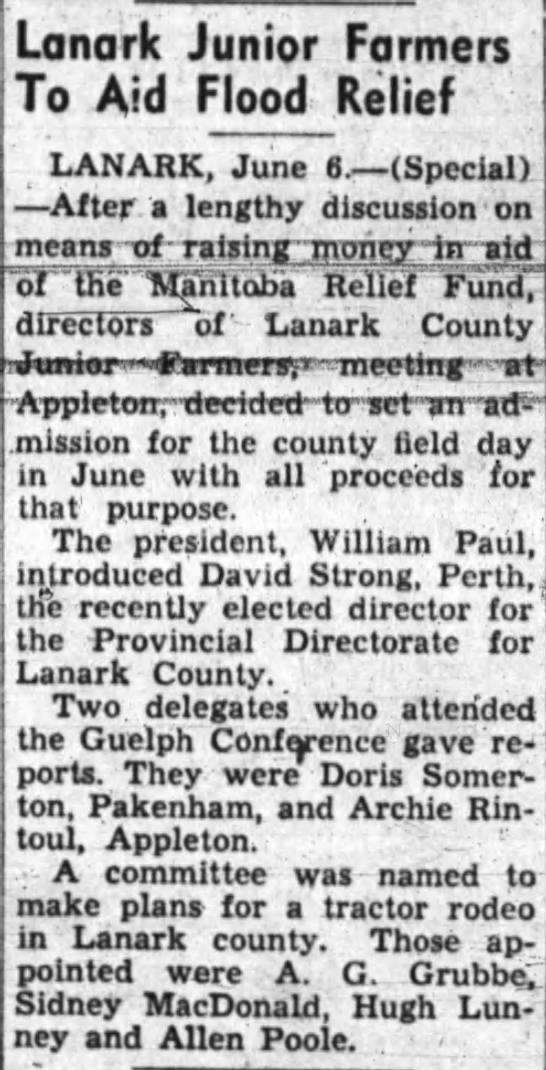