Anyone know the name of the former Lanark Doctor this 1952 news article is referring too? The article mentions some of the things found in Lanark such at Glenayr Kitten sweaters.

Squadron Leader Irving ‘Hap’ Kennedy was a Canadian fighter pilot. He flew Spitfires in Europe and Malta and Sicily and Whirlwinds and an American Kittyhawk in an amusing adventure in North Africa. He was shot down in France after the Normandy invasion and escaped.

One of the last of the future Canadian aces on Malta was a man with matinee idol good looks: Irving “Hap” Kennedy, who arrived in December 1942. His seven months of operations from Malta with 249 Squadron netted him five of his 12 victories. Like MacLennan, Hap wanted no more to do with war, and returned to the small town outside of Ottawa where he had grown up.

He became a much-loved country doctor first in Lanark Village and then back to Cumberland. “There was a need,” he says. “There were few doctors. I wanted to be a country doctor.”

His father had been Cumberland Township’s clerk treasurer. He was also a First World War veteran wounded at Vimy Ridge. For 37 years, Dr. Hap delivered babies at a rate that made him lose count He was the only doctor in the middle delivering hundreds of babies and making a powerful yet peaceful contribution to his hometown of Cumberland, Ontario, for decades. 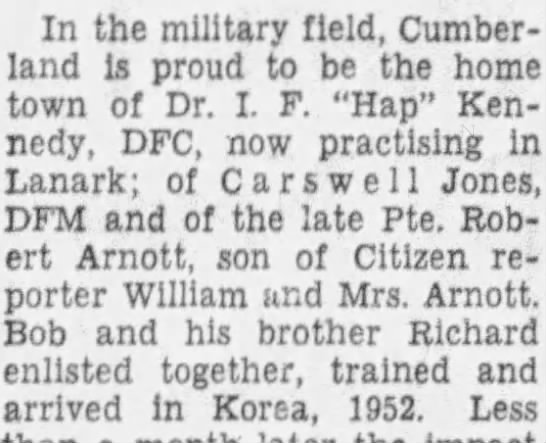 They are out there. But soon they will all be gone. Perhaps you think of them as simply that older gentleman that walks his small dog down your street every day, the elderly fellow fumbling with his wallet ahead of you at the check out, that quiet guy who wears a badged blazer to church on Sundays, or that wonderfully kind, retired doctor who tends his garden. They live among us, blend in, live quietly and in the end they face the inevitable with dignity and quiet strength. To most neighbours and passersby, they are largely invisible, but once they were the boldest hearts, the fastest warriors, the most dashing and handsome of men, the most steadfast of comrades.

They are the fighter pilots of the Second World War. They are the ordinary men who stood up in the face of abject evil, prevailed and returned to live and love. They are the reason for our freedom. They are the lucky ones. Many did not return and those that did, lived their lives to the best of their abilities as tribute to their fallen brothers.

No one did more during their time in the RCAF, nor lived the remainder of their hard fought life with more dignity, contribution and gentleness than Cumberland, Ontario native Irving Farmer Kennedy. Known as “Hap” to his air force friends and “Bus” to his local community, Kennedy died on Thursday, January 6th, 2011 at the age of 91.

Mike Potter, Founder of Vintage Wings of Canada, had much the same thoughts when it came to describing the priviledge of his friendship with Kennedy:

“We are occasionally reminded that there are giants that walk among us, but sometimes they are heavily disguised. Hap Kennedy, as he was in his 80s when I had the privilege to meet him on several occasions, was a soft-spoken, friendly, modest and courteous gentleman, a father, grandfather, country doctor, and a strikingly handsome man in his old age. The few photos we have of him as a young man show him as the kind of clean-cut handsome young man you hope your daughter will bring home to introduce to the family, but they do not tell the whole story.

But here, behind the handsome face, is one of Canada’s magnificent warriors – a man who voluntarily entered some of the toughest and most dangerous fighting of recent times, where every engagement was the modern equivalent of hand-to-hand combat. Simply surviving Hap Kennedy’s war would have been an accomplishment, Malta in ’42, Sicily in ’43, D-Day in ’44.  But to chalk up victory after victory and become one of Canada’s most celebrated Aces of the war sets him apart. READ more here– CLICK 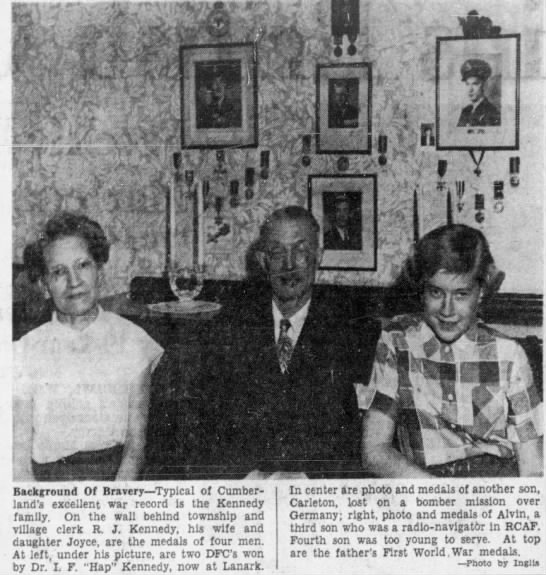 When I was 17- The Kitten- Glenayr Knitting Mills Reunion

How Much is that Kitten Sweater in the Window?

Stories from the Old Kitten Mill

Down by the Old Kitten Mill

Linda’s Mail Bag– Do You Have any Info on my Blanket?

You’re from the Village of Lanark You Say?