Cram—Birth, at Appleton on the 9th inst., the wife of John F. Cram, of a son.

Cram-Scott—Married, at Almonte on Thursday, 10th inst., at the residence of the bride’s sister, by Rev. William McKinzie, Mr. William Cram of Carleton Place to Miss Lizzie Scott of Almonte.

A resolution of condolence has been passed by the students at the Royal College in Kingston to Daniel Cram, Carleton Place on account of the death of his son, a student at the college, this summer.

The Herald says that Mrs. Daniel Cram, Sr., died at Carleton Place on Saturday last in her 73rd year.  Her maiden name was Margaret Harkness, daughter of Col. Harkness, aide-de-camp to the Duke of Richmond when Governor General of Canada.  Deceased was born in Lancaster, Glengarry, Ontario and was married to the late Daniel Cram in 1845(?).  Seven of their nine children born are living.  In religion she was a devoted Baptist.

1917–John F. Cram and Sons bought over eight thousand muskrat pelts in one week from district trappers and collectors.

1869-An enlarged stone grist mill building was erected by William Bredin on Mill Street, together with buildings occupied in the following year by Joseph Cram as a planing mill and by John F. Cram as a tannery.  A stone church building for the Zion Presbyterian congregation was built at the church’s present Albert and Beckwith Street location.

The building of the first stone church in Ramsay township, still standing at the Auld Kirk cemetery, was completed in 1835.  Its Church of Scotland members included a number of residents of Carleton Place.  Its trustees in 1836 were James Wylie, James Wilson, John Lockhart, John Bennie and John Gemmill.  This congregation’s first resident minister, the Rev. John Fairbairn, came to Ramsay in 1833.  The first child baptized by him was John Fairbairn Cram, a later prominent resident of Carleton Place.  The church was succeeded by St. Andrews Presbyterian Church, later Bethany United, of Almonte.

*St. Fillans, Maplewood and Pine Grove or Cram’s United cemeteries include land obtained by John Cram in 1818 on his arrival from Comrie in Perthshire. From St. Fillans in Perthshire came a large number of the settler’s arriving in that year. Scotch Corners, separated from the main part of the township by the Mississippi Lakes and containing the Scotch Corners cemetery, was named as being a predominantly Scottish farm settlement. It was occupied in 1822.

John went to school in Ramsay and the Carleton Place High School. He farmed till uncertain health induced  him to retire and later moved to 27 Albert St., Carleton Place. He is survived by his widow, the former Eva F. Stevenson, a daughter Barbara, (Mrs. E. G. Cameron) of Ottawa and a son William with Ontario Dept. of Lands and Forests, (Air Service) at Sault Ste. Marie and nine grandchildren.

Two brothers survive, Glen in Three Hills, Alta., and Boyd in Ottawa; and two sisters, Grace (Mrs. Benjamin Guhl) of Cleveland, Ohio, and Florence (Mrs. Harwood McCreary) of Glen Isle. Two brothers predeceased him, Murray and William and two sisters, Laura and Jessie (Mrs. Morley Wilkinson). He was a life-long Baptist and active in that Church’s affairs, serving at one time as Clerk and on the Board of Managers for many years.

At one time he was on the Beckwith Council and also a Trustee at Ramsay S. S. No. 8. He took an active interest in agricultural matters, His sound judgment and keen, kindly sense of humour will be missed by a host of friends. Pallbearers were: Elmer Reid, Bill Anderson, Hollie Lowry, Robt. Hawkins, Bert Lowry and Arnold Jackson.

The funeral of Daniel Boyd Cram took place July 23, from the Alan R. Barker Funeral Home, McArthur Avenue to the Baptist Church where Rev. John MacPhail assisted by Rev. Ron Crawford of Ottawa conducted the service. Interment was made in the United Cemeteries. Mr. Cram died in an Ottawa hospital, July 21 after an illness of many years. He was in his 65th year and had resided at Glen Isle. He was born October 22, 1903, a son of the late Daniel Cram and his wife, Euphemia Houston of Glen Isle. He attended the Carleton Place Baptist Church. He was predeceased by his four brothers. Murray, Glen, Jack, and William; also by two sisters, Miss Laura Cram and Jessie, Mrs. M. Wilkinson. Survivors include two sisters, Grace, Mrs. Ben Guhl of Cleveland and Florence,  Mrs. Harwood McCreary of Glen Isle. The pallbearers were Robert Anderson, Robert Hawkins, Bert Lowry, Dr. E. G. Cameron, Dan McCreary and Glen Robertson

The original owner of Cram Cemetery.

Doing some research for the Carleton Place and Beckwith Heritage Museum today found me at the Land Registry Offices in Almonte.  There were a lot of pages printed out while getting information for a home on High Street that we might not have needed, but there was an interesting  entry or two.

It mentioned the Willis burial plot on Lake Ave West , but a certain land transaction from 1892 to 1896 between the Crams, Sumners and Pattersons mentioned caves. This was  not in the country, but in the town proper. Were they small limestone caves by the river?

“part described with use of caves”

Has anyone ever heard mention of caves in Carleton Place?

One of the biggest remodeling and decorating mistakes people make with older homes is getting stuck in the rut of “everything has to look old or be of that era”. Rules were meant to be broken when it comes to decorating. Just because you have an old home does not mean it needs to be only filled with antiques. But, I watch a lot of DIY shows and it also bothers me they are so sledgehammer happy.

Sometimes using an eclectic mix of old and new has a very appealing and unique aesthetic. When we bought the Morphy- Cram house in 1981, Angelo and I insisted  on reusing as many original building materials as possible whenever we did anything to improve the home. Most of the interior is filled full of eclectic inexpensive thrift shop finds from Lanark county. It was that important to me to give these random items homes.

In 1995 after the house fire, the restoration company had to knock out walls and tear up floors. Had I not thrown a fit, the original wood trim might have been destined for the dumpster or the open dealer market.  Instead of picking through the pile, spotting pieces with potential, then transforming them I insisted they catalogue each and every piece and refinish them. Everything had to be done to keep the house’s historic character intact.

When it came to building the Campbell side addition,  the stone was used from the same quarry as the original house was built from. Retired stone mason, Jack Wilson cut each and every one of those pieces of stone by hand and it took him over two years. What were we going to use for the pillars and wood accents we wondered? The answer was just across the street.

Neighbour Laurel McCann had an auction just before she sold her home on Lake Ave. East. The pillars etc. from their original verandah were stored in her shed after they remodeled the front of the house. I bought each and every pillar and trim that day from her and each piece was applied to new verandah instead of buying new replicas. The last two pillars which had been stored in  one of our sheds were finally used as decor in the new laundry room last year.

Using salvaged materials is a win-win. Your  will get a great look incorporating salvaged heritage pieces. Instead of throwing things out when you renovate– leave them on the curb for someone else,  or put them on Craig’s list or Kijiji and save them from the landfill sites never to be seen again.

There is no comparison between the old and new that that is sold today. I am  proud to say my home was not only built by the Morphys but it has part of the McCann family in it too. I even have the old McCann family piano, and oh yes, a hundred other Lanark county families once owned my knickknacks.

Footnote: Why would anything have that “thing” in their vestibule? Angelo loved Christmas and the movie series Planet of the Apes. One day I went to an auction on Quarry Road and he was there– just as he stands. His original head was gone and there was a monkey head instead. I saw that as a sign. The next day I heard he was probably going to be thrown out and my friends Kevin and Wendy went to pick him up. After a lengthy airing and cleanup he was was happily placed in my home. Angelo would have had a great laugh about this chap. Everyone else does.:) 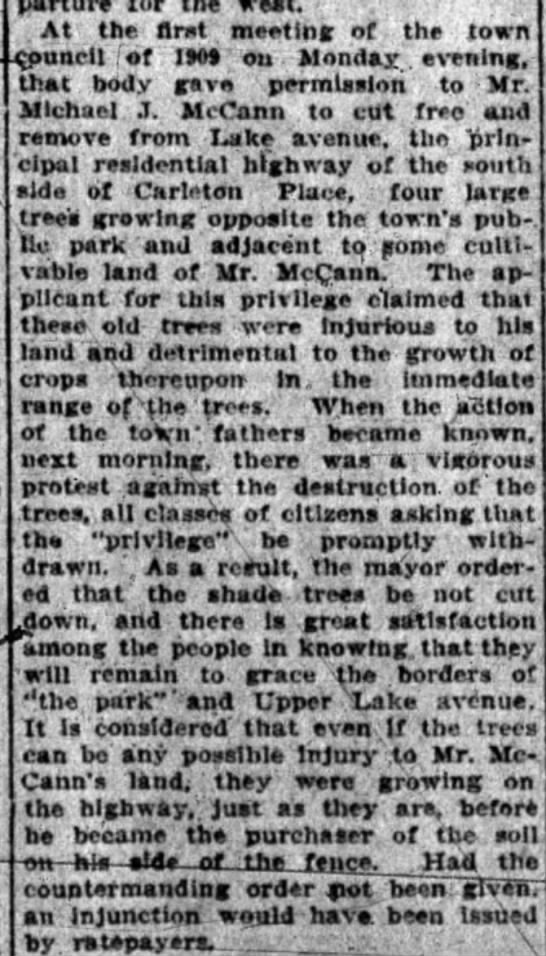