Following recent publicity in regard to the impending demolition of the Almonte Railway Station, a group of local citizens whose interests lie in the area of the preservation of buildings of historical or heritage value have embarked on a campaign to have the 75-year-old building saved from the demolishers hammer.

A special meeting was held at the Continuing Learning/Office last Wednesday evening >ahd it was learned that the C.P.R. had taken back ownership of the building from Mr. Brian Meloche when Mr. Meloche was unable to come up with a definite plan to move the building from its present site – a requirement of the sale. As the situation stands now, the station is still scheduled for demolition by December 1st, 1978. However, the local group has been investigating other means of saving the building and a second meeting, scheduled for tomorrow evening (Thursday), 7.30 at the Continuing Learning Office at 88 Mill Street, may shed some light on the means to bring this about.

Among those expected to be present will be Dr. Harold Kalman who has worked in co-operation with the Ontario Heritage Foundation of the Ministry of Culture and Recreation, doing feasibility studies on old railway stations – among them the Almonte station. Hope has been expressed that help can be sought from the Ontario Heritage Foundation for a restoration program. Another guest who has been invited to the meeting is Mr. Harry Gow who is deeply involved with Transport 2000. This group has been busy with attempts to save some of these old unused railway stations and restore them for use as flag stops for the Via rail system in short haul commuter type travel. Some success has been achieved along this line and the possibility will be investigated here.

Although Almonte’s situation in regard to commuter travel between here and Ottawa would seem to be suited to such a scheme, a definite need for this type of service would have to be established before any steps could be taken. Representatives are also expected to be on hand from the Ontario Heritage Foundation. Unfortunately, the meeting falls on the same night as the All Candidates’ Meeting at the Town Hall but those not planning to attend that meeting are urged to attend the one at the Continuing Learning Office.

Attempts to save the Almonte Railway Station from demolition came to an abrupt end last Thursday morning when a Stittsville firm contracted by the C.P.R. moved in with heavy equipment and reduced the 75- year-old building to a pile of rubble. Surprised members of a heritage minded group of individuals from the Almonte area, many of them members of the North Lanark Historical Society, cancelled a meeting that was planned for Thursday evening to discuss various methods that could be used to preserve the landmark which served the area well for so many years.

Representatives from Heritage Canada, Transport 2000 and the Ministry of Transportation and Communications had been invited to Thursday’s meeting. Meeting organizer, Sandra Way said that her group was unaware that plans to demolish the building had already been finalized with Stacey Construction of Stittsville when the date for the meeting was announced last week. Attempts to have the building saved from the demolisher’s hammer began in earnest following discussions at the Ottawa Valley Heritage Conference in Arnprior recently, in the wake of publicity surrounding attempts by Mr. Brian Meloche of R.R.2, Carp, to secure financial help to move the building to another site, a proposition that proved to be far too costly, apparently.

The C.P.R.’s position was that they simply wanted the building away from its former site before winter set in and when no concrete proposals were put forth to move the building, they cancelled the purchase offer by Mr. Meloche and went ahead with demolition plans. Stacey Construction planned to salvage as much of the cut limestone as possible and the Town secured a quantity large enough to serve as a facia or a small commemorative wall at the proposed new public library which is to be constructed near the former station site.

Covered From Head to Toe with “The Beautiful” !! Almonte Train Station

This house always fascinated me. When I was a lad the Burgess home was owned by a Mr. Feltham (sic) who ran a rag business out of a former hotel on the west side of Moore Street in the area beside Interval house that was torn down in the 1950’s and replaced with a Cities Service gas station.–Ray Paquette

My memory of that lot where Sal’s Place is situated is much earlier when there was a large brick building that was owned by a Mr. Feltham (sic) who ran a “rags and cloth” business. He and his family lived in the large home east of the CPDMH which is currently an apartment block. He drove a large late ’40s or early ’50s Packard.

Behind the main building was a storage shed which we use to climb onto the roof to watch the trains on the track directly behind the lot.Ray Paquette 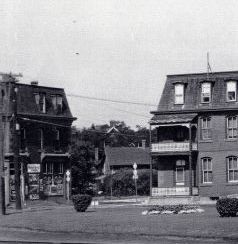 SRC Music Store in Carleton Place, Ontario–124 Moore St where the large building once stood and once was a Cities Service gas station.

Dr Howard was also located in the back of that empty property near Wool Growers.

Dr. Howard, who claimed to have been descended from one of the original 13 Barons of England, was a big man, soft spoken, and used to relate to me about his turkey hunting trips in the U.S.A.  He had a law suit with the Montreal Daily Star and lost.  The Star published a pamphlet about him and distributed it to the householders of Carleton Place.

Did You Know Who was Cooking in Back of Lancaster’s Grocery Store? Dr. Howard I Presume! – Part 3

The Shenanigans of Dr. Howard of Carleton Place – Part 2

Ray Paquette’s Memories- McNeely and the Mississippi Hotel and Doughnuts?

Thanks to Jennifer Ferris for sending these images which were probably from the C.P.R Restaurant in Carleton Place 1885

Photos thanks to Jennifer E Ferris. Thank you Jennifer! She also sent maps of where Henry Lang’s barn was located too. Check it out. Henry Lang and His Lanark County Magic Barn?

Since his brother was kind of crazy — it looks like it ran in the family The Crazy Town World of Mr. George Arthur Burgess of Carleton Place 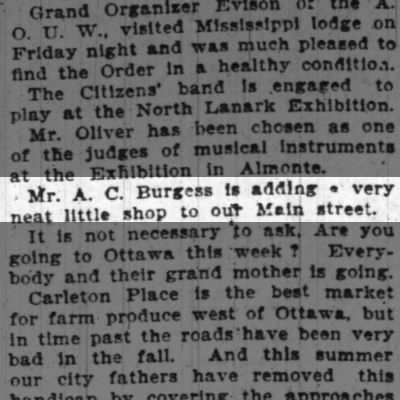 It was bought by A. C. Burgess in 1887 and after improvements, was leased again as a sawmill. The name Arklan was provided by Mr. Burgess, who a little earlier had begun developing his model stock farm on the adjoining farm land. His brother, G. Arthur Burgess, mayor of Carleton Place in 1903 and 1921, and at times a stormy petrel in municipal affairs, installed a small hydro electric plant at Arklan in 1909 and for about a year supplied a part of the town’s power for electric lighting purposes, leasing his installations in 1912 to the town’s other supplier of electric power.-More Notes about the Mysterious Arklan Farm

The Auction of the Year in Carleton Place

Carleton Place and Beckwith Heritage Museum-Snedden’s Hotel
Ray Paquette left these comments on my WordPress site yesterday and I had to share as they are very important to keeping our local history alive. Thank you Ray!

The Words of Ray Paquette
I grew up, ages 7 to 12 years old, living in the apartments in the former hotel that is prominent in the first photo (Snedden Hotel). During our youth, we spent a lot of time at the station and not on rare occasions earning the wrath of Mr. Mitchell for climbing the Norway Maples that lined Miguel Street.Mr. Dunphy was in charge of the Express/Baggage as assisted by Mr. Simpson in Express and Joe Hawkins in Baggage. *Mr. Raeburn was the Station Master (he lived on Lake Avenue east in your current home (Springside Hall). Ted Lemaistre worked the telegraph and assisted Mr. Raeburn.

Trains ran through Carleton Place beginning at about 2:30 a.m. with the Trans Continental from the West ending the day about 9:30 p.m. with the final Toronto Pool train.

The Ottawa newspapers arrived in Carleton Place aboard the 4:30 Toronto Pool Train and all the carrier boys congregated in the express area to get their papers for distribution throughout the town. Later Mr. Paul won the contract from the newspaper and delivered the papers to the back of Ernie Foote’s Photography that was on Bridge Street about three doors south of the Queens Hotel.

Author’s Note– I was privileged to meet Mae and her son Bert Raeburn a few times and Mae told me many times that she used to hear the train coming down the tracks which used to be a few 100 feet away and say,“There comes my bread and butter down the track!”

George Giles-–I grew up with Ray Paquette and remember picking up my papers at the station. We spent many hours playing in the area around the station and the old Wool Growers. Enjoy seeing the photos of Carleton Place.

*Springside Hall-What’s Changed in Your Home in 40 Years?

People say Tom Mitchell the gardener who took care of the CPR gardens was a kind older man. Not only could this man garden, but he was known as a man with a big smile and a pipe constantly in his mouth . The pipe must have been a permanent fixture because it was said he had a permanent groove in his lower lip. Not much is known about him, but in his later years Tom had a room in the Mississippi Hotel. Tom Mitchell won national awards for the gardens at the Carleton Place CPR station.

Looking for any information you might have– it will be happily recorded.

Ted Foote ( Tom Mitchell’s son in law ) was the manager of the LCBO when it was on Bridge Street beside the Carleton Place Canadian office where Coldwell Banker’s offices are now .

Joann Voyce–Tom’s grand daughter Audrey Foote married Ray Simpson and raised a family in Carleton Place. The gardens were the whole area where the Veternarian and Subway now is.The only building on all that piece of land was the actual station. I remember the gardens well.Other than the area directly in front of the station which was paved, the rest was gardens. Even around the water tower where the steam engines filled up, was flower beds. I remember many,many hostas

Sandra Rattray–When I was a child we played inside and outside the station almost daily. Nobody worried about it. I remember it as a huge space where men and women had separate areas. It was kept fairly clean. The baggage department was separate, at one end and Eric Simpson was the Manager of that department. His son, Don Simpson (wife Judy from the C.P. Library) might have pictures. Everyone was very kind to the children, especially one group of children, who had to use the Station washroom because their mother would not allow them in the house. Everyone who knew was disgusted. I actually dated one of the ticket agents and telegraphers for a couple of years. We rode the trains for free.

Llew Lloyd— I’ve commented before about Tom Mitchell and his relationship to my family . My mother and his daughter, Evelyn ( Mitchell ) Foote, were first cousins. Family lore has it that Tommy won first prize for best C.P.R. gardens every second year . He won every second year because the contest rules didn’t allow anyone to win in consecutive years . Evelyn’s daughter Audrey married Ray Simpson who coincidentally ran the gas station across from the RBC before the times of Rupert St. Jean and Earl Horricks. Audrey and Ray’s son Terry is the husband of Margaret Simpson who often comments on your posts .