From the Buchanan Scrapbook

If you let your cattle trespass within a quarter mile of mills, stores, taverns or churches on preaching days  in 1841 it would cost you a shilling– same with a cow without a bell.

Did you know each cow wore a different bell and that is how they knew whose was who..

If Scottish Highland beef is good enough for the Queen’s table, it’s good enough for Louis Irwin of Clayton. He went into the business of raising “the beef of royalty” about five years ago and now his herd numbers more than 70. The Irwins are accustomed to passers-by slamming on their brakes when they pass the farm pastures, because the animals resemble something between a buffalo and a long haired sheepdog. They are covered with a profusion of long and gracefully waved hair, which will grow up to 13 inches.

The cattle are various shades of brown, but the breed also comes in black, brindle and red. At first glance it’s hard to believe the animals are cows. The long hair gives them a primitive look and they are short-legged, long-bodied and with horns that grow sweeping out from the head with a back curve making them look ferocious and wild. Superior meat However, Mr. Irwin says, they are a docile, contented animal, which is partly the reason for the excellent quality of beef they provide. The animals live outdoors all year, another reason the meat is superior. While other breeds are kept inside from the winter elements, Mr. Irwin says layers of fat build up on their bodies.

The Highland breed needs no fat insulation from the cold as its long hair develops an underrating of thick down, which insulates the animal from the severe weather. In fact, the breed originated in the Highlands and the west coast Highlands of Scotland both areas where severe climate is the rule rather than the exception. Highland cattle are usually smaller than other breeds with much less fat, so the consumer can buy smaller weights for freezer lots. Mr. Irwin said the average weight of his cattle is between 800 and 900 pounds. They are raised as beef cattle only. “It’s less expensive getting into Highland cattle than any other breed,” he says. “Because they are an outdoor breed, no barns are needed, and they are foliage eaters and eat anything that grows. Feeding the animals is really no problem.”

The Irwins use no additives in the animals’ food for the winter. Mr. Irwin doesn’t believe in all the things beef producers add to bolster weight and produce larger animals. “I like to know exactly what I’m eating,” he says. There are few breeders of Highland cattle in eastern Canada. A few farmers have a small number “to dress up the barnyard,” Mr. Irwin says, but the big Highland breeders arc usually in the western provinces where the first Highland bull was bought in the 1880s by Lord Strathcona of Winnipeg. Balmoral Castle in Scotland raises Scottish Highland cattle for the Queen’s table, and other royal families have favored this breed as its choice of beef. ; In some parts of Scotland the fine wool which grows under the outer coat of hair js often sheared and spun for clothing just as one would use the wool of sheep. This unique animal has another endearing characteristic.

The mothering instinct is prevalent and abandoned calves are unheard of. A Highland cow will not leave her new calf even to feed herself until that calf is old enough to follow. i Safeguard to calves ‘ This protective attitude is a safeguard to new-born calves, many of which would otherwise be lost to predators. The calves arc hardy and grow rapidly to maturity. ! There is only one drawback to raising Highland cattle. Mr. Irwin calls all his cattle by name and they readily come when called. “It’s hard to prepare such a friendly, trusting animal for the slaughter house,” he says.

Perils of the Cows of Carleton Place or Where’s the Beefalo?

Should Cows and Smart Cars be Tipped?

Did You Know this about Fraser’s Meat Market?

Cattle Driving — Keeping the Beast on the Road 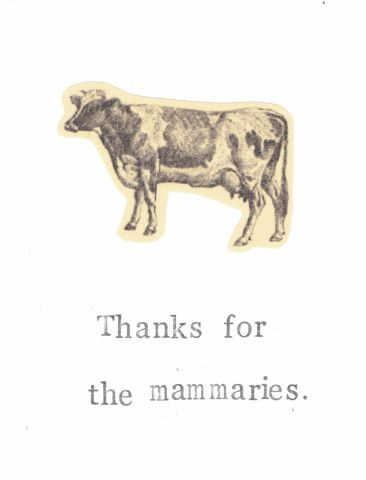 How A Man Who Broke Leg of Chas. Bollinger’s Cow Was Caught

January 13 1928- with files from the Almonte Gazette

R. McMillan of Ottawa, appeared before *Magistrate J. T. Kirkland at Carleton Place on Wednesday charged with failure to transfer title of a car and was fined $10 and costs. For failure to return or remain at scene of an accident he was fined $27 and costs.

McMillan also made a deposit of $140 with the court to cover the costs of the cow which was run down on the road near Black’s Corners.The accident had caused the cow to break a leg and was afterwards shot. The cow belonged to Charles Hollinger.

Wilfred Hurdis, a young lad of about 16 years of age who was driving the cattle, having no paper or pencil on him took his stick and marked the number of the car in the snow. Afterwards it was transferred to paper and Traffic Officer Fred Turner was notified and took charge of the case.

The March to Black’s Corners

The House of Daughters –Stonecroft House

Dishing up the Memories of The Devlins

Sitting on a Bench Outside Devlin’s Store Looking for Stories

In Memory of H. Albert Hurdis

On Saturday afternoon last a vicious cow made an attack upon some children in the neighbourhood of the Free Church. One of the little ones was very badly hurt and had its clothes tom off, and, but for the interference of some persons living close by, the result might have been serious.

There have been many complaints respecting this cow, and if one half of the gossip is true the brute ought not to be allowed at large, and if the owners, whoever they are, will allow such a beast to be roaming around the streets, then the sooner the Council passes a by-law to prevent it the better. W e understand complaint of this particular cow has been made to the owner before.

Did you know that 20 people a year in North America are killed by cows?

In April of 2016 Marian Clode died after being charged at by a herd of cattle while out for a walk in Belford, Northumberland,(UK) on 3 April. The 61-year-old had been walking along a public bridlepath with her husband Chris, daughter Lucy Rowe and son-in-law Kevin when they were approached by a herd of cattle which included several calves.

When one cow charged at her a third time, it flipped her like a rag doll over the fence into the next fence. The consultant said the injuries sustained were the worst they had ever seen, equivalent to those of a high-speed crash. There have been 74 fatalities involving cattle recorded since 2000 – with 18 of those being members of the public.

Ten cows and a calf were killed when lightening hit a tree on the farm of Mrs. Alex McCuan Monday evening. The cattle were Hereford and Shorthorn breed and valued at $125 each. The farm is located four miles out of Carleton Place on highway 15. The cattle were not insured.

Fifteen head of cattle were killed on the C.P.R. Track about a mile south of Carleton Place after being struck by a train at an early hour this morning. A herd of 175 cattle had been driven into town by the Willow brothers yesterday and placed in the stock pen for shipment. Some time after midnight cattle broke through the fence ad proceeded to travel down different track routes.

A freight train traveling near the 10th and 11 th concessions of Beckwith struck the largest herd and before the locomotive could slow down fifteen cattle were killed or so maimed they had to be destroyed. Two head were also killed on the line west and three east of the station making for a total of 20. 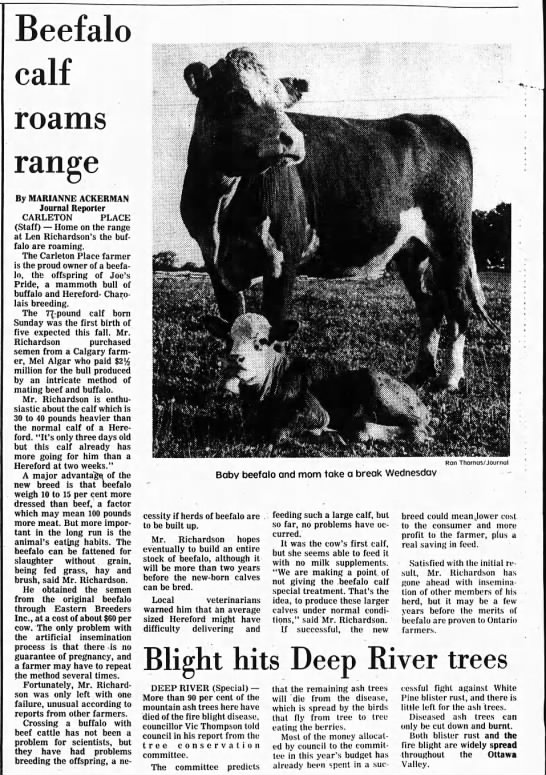 Should Cows and Smart Cars be Tipped? – Zoomer.