Play while viewing these beautiful vistas

I Have to Brake For Couches? Really? 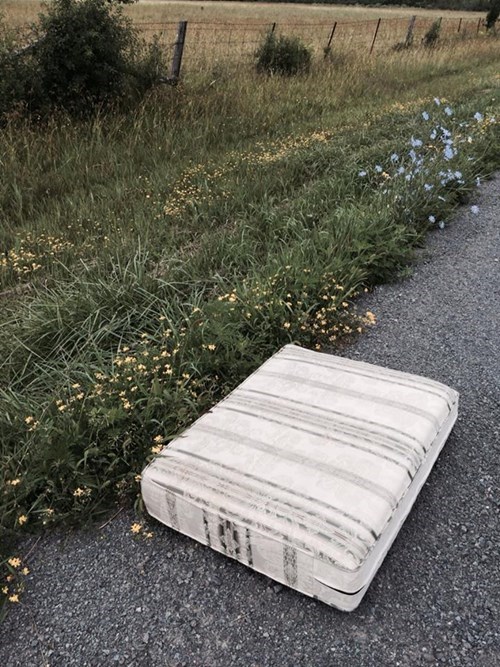 Please don’t dump on our Lanark County Roads! Only you can prevent couch-breeding!

ALL PHOTOS BY LINDA SECCASPINA

I don’t know about you but when I drive down Quarry Road, I like to enjoy the beauty of Mother Nature- not admire the pattern of a long lost couch. Take this sofa please! This is not public shaming- I had different folks email me about it– I have no idea who this couch belongs to-it’s just THINK before you dump.

British actor Rowan Atkinson hams it up for photographers during a photo-call to promote his film “Mr Bean’s Holiday” in Germany, at Berlin’s Adlon hotel 22 March 2007. AFP PHOTO JOHN MACDOUGALL

So what’s a responsible sofa disposer to do?

Death of a sofa: Ask local theater groups or high school drama programs if they’d like an old couch for a stage prop. They’d probably want you to deliver it. And condition counts, unless it’s for something like “Death of a Salesman.”

One woman thought she was doing her co-workers a favor when she procured a neighbor’s “free” sofa-bed couch for the staff room, rolling it on a dolly down the street to her own driveway. Turned out the office didn’t want it, and as she weighed disposal options, it rained, and the couch got soaked. “Then stray cats started sleeping and urinating on it,” she said. That ruined any chance to donate it, so she and her husband pummeled it with a sledgehammer and took the metal bed frame and springs to a recycling center.

And when all else fails, grungy couches often end up on the side of the road. Like this one.