Yesterday Karen Blackburn Chenier and her brothers gave a great eulogy about their late mother Doris Blackburn. Doris, known to many was a no nonsense teacher, but the students that came out of her class became the better for it.

I really did not like school because I felt there was nothing in school for me that would help me become the fashion designer I wanted to be and became for decades. I love history and English Literature and Composition but had no passion for anything else. Some people are scholars and some are not, and I was no scholar.

Every year I pulled something off– which wasn’t huge in anyone’s eyes– but in my mind I  thought I had blown it. Even if I wasn’t known for my brilliance I did try- I swear I did. Okay, so I tape recorded the teacher scolding one of the Dover kids in Grade 7 and got caught. I was notorious for passing notes as I can never keep quiet, and no doubt if I had been in Doris Blackburn’s class I would have been eating those notes.

I don’t remember too many awful things happening in school except the pencil sharpener tacked to the wall was way overused by myself included. The object in question was a graphite-chomping thresher that more often than not left your pencil gnarled and twisted. Not only that, but the sound of its grinding was so loud, the class basically had to stop what it was doing while you finished destroying your writing implement mid-exam. Basically the only good thing about this pencil sharpener is that it provided you an excuse to get up from your seat during class.

No doubt that Mrs. Blackburn had the pencil sharpener as well as everything else in her class under control. But there was one thing that annoyed Doris and the Blackburn family told a story about Corey Sample and their Mother at her funeral Monday. Seems that Corey was a “fidgeter”and that was definitely “a no fly rule” with Doris. So, without blinking an eye one day when Corey began fidgeting, well  Doris took action. In one fell swoop she went to her desk and came back with a big roll of tape and taped his hands to his desk.

What happened to him that day made a lasting impression on him, so much so, that he wrote the family when he heard of her passing. He said there was no one that put the fear of God in him like Doris Blackburn– well maybe his Grandmother. Corey told them he was sorry he could not be there, but he was raising a glass to her memory. He also added that he was now was able to do that with his glass because his hands were no longer taped to a desk. 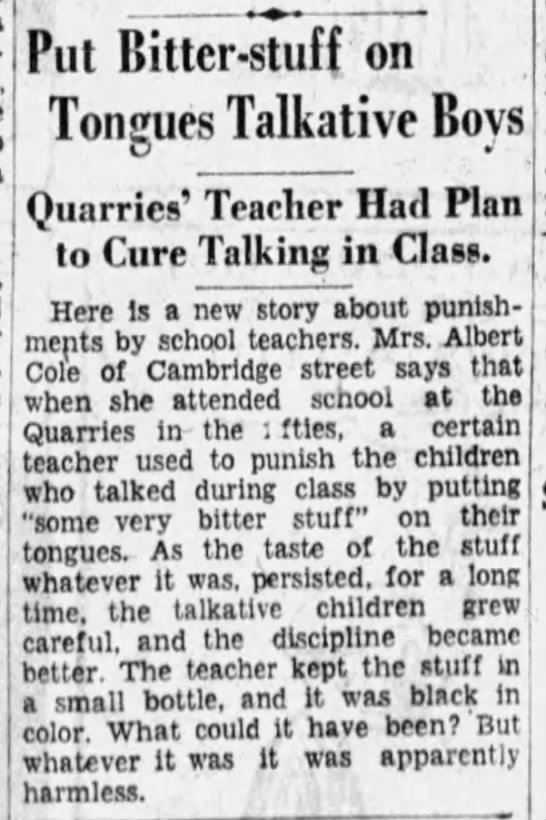 Friday night October 5- FREE! Donations to the Carleton Place and Beckwith Heritage Museum would be appreciated–

AND it’s on!!! Explore the amusing and ghastly tales of old Carleton Place. Escape into the past as your offbeat guide Linda Seccaspina provides you with an eerie, educational, yet fun-filled adventure. Learn about many of Carleton Place’s historic figures and just like you they walk the dark streets of Carleton Place in search of nightly entertainment, yet, they don’t know that they themselves are the entertainment. Walkabout begins Friday night October 5 at 7 pm in front of Scott Reid’s Office–224 Bridge Street– the former Leland Hotel –and ends at the Grand Hotel. About one hour.