William Arnold (Barny) Metcalfe was born in Almonte and farmed and operated his dairy on the outskirts of Almonte housing development (Metcalfe Park) built on the
farm in the 2000’s. Metcalfe’s Dairy was located on King St. next to present day Naismith School. Two Almonte dairies delivered milk daily (except Sundays) 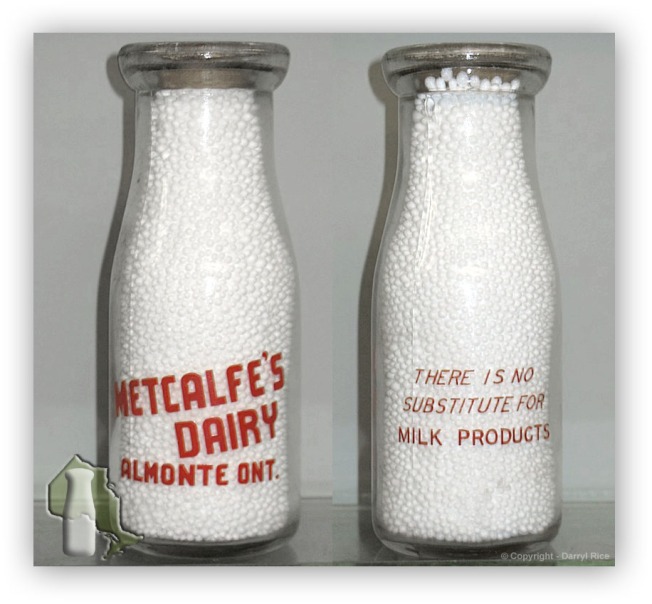 Metcalfe’s Dairy, Almonte, round red 1⁄2 pint, – reverse “There is no substitute for milk products”

Return of Convictions for the Period Ending Dec. 13, 1898

A notable want in Perth is about being filled up.  Mr. William Mortimer has made arrangements for getting the milk from the dairy of C. A. Matheson and will serve it out to customers delivered at their door this winter and from then on.  The arrangement will be commenced in about a month from this date.  Meantime, Mr. Mortimer will call around to find out who may wish to become customers.  The milk furnished will be first class  as Mr. Matheson’s cows are notably excellent ones, while, coming from his dairy, the milk will certainly be the pure article.

The Hopetown Cheese Factory closed 20th November having been in operation 5 months.  The last shipment of cheese was made 13th Nov. but the patrons were settled with on the 20thnotwithstanding the trouble with gassy milk in the fore part of the season which reflects great credit on the cheese maker Mr. McVeigh that not one number of cull cheese was made the goals having always brought the highest prices at the time of sale.  The committee for engaging a cheesemaker for the ensuing year have taken no action yet in the matter not knowing whether to hire a cheesemaker on salary or commission.

John Fraser of Scotch Corners is fixing up a house likewise which looks well; John Fraser finished up an ice house and cold storage this spring to keep his Saturday night and Sabbath milk in with fresh meat, butter, etc.,–it answers the purpose well and he is now building a silo for his corn; and our neighbor Archie McLean is also building a silo and shed to his bank barn; James W. Moodie is shingling his barn anew;

It is reported here that O’Brien, the man recently arrested in Winnipeg and now on his way east in charge of Chief McGowan of Smith’s Falls, is a bigamist  with more than an average record of female conquests.  Up to the latest advice, the prisoner has been charged with having no less than five wives one of whom is the daughter of a prominent farmer and dairy man of this section.  O’Brien spent several winters in the vicinity of North Augusta and was looked upon as quite the ladies man.

Mr. and Mrs. James Allen, Erwin Apartments, Gore Street, quietly celebrated their Golden Wedding anniversary on Thursday of this week.  On Jan. 19, 1883, Mr. Allen was married to Janet Ann Wilson at the home of her parents, Mr. and Mrs. John Wilson, Sr., Scotch Line, by the late Rev. Malcolm MacGillivray of St. Andrew’s Presbyterian Church, Perth.  The groomsman was  Abraham Ferrier and the bridesmaid was Martha Wilson, afterwards married to Mr. Ferrier and since deceased.  After their marriage, Mr. and Mrs. Allen resided on the Scotch Line where he conducted a blacksmith business up to 1913 when he sold the business and he and Mrs. Allen came to Perth to reside on Foster Street.  Mr. Allen was the representative of a firm dealing in dairy supplies and also represented several cheese factories as salesman on the Perth Cheese Board.  Mr. and Mrs. Allen lived for four years in Winnipeg but returned to Perth three years ago.  Their union was blessed with two sons, Ray (or Roy?)  Allen of Winnipeg and the late Melville Allen.  Mr. and Mrs. Allen are enjoying splendid health. At the time of their Silver Wedding anniversary 25 years ago, Mr. Allen was a reeve in North Burgess.  The Courier of Jan. 1, 1908 stated in reference to the reception at their home:  “A large number of their friends and relatives were present and made the evening pass pleasantly, all wishing Mr. and Mrs. Allen felicitations and the hope that they will live to enjoy their Golden Wedding event”.

This news just in from Tim Hortons:

This year’s Smile Cookie Campaign brought in a whopping $8,076.00 for patient care equipment!!

This was their BEST YEAR YET and we have

YOU to thank for all of your cookie purchases!

Thank you for your part in making this year’s campaign such a success!!!

Mrs. Fleming of Carleton Place used to pack a lunch pail for her son Wilmer to take with him when he was braking on the local C. P. R. train. In those days the harder the cookie, the better the cook you were. No matter what else came back , there was never a ginger snap that made it back to the kitchen.

Upon being asked by his Mother why Wilmer replied,

“We put them on the rails to see if a train could break them.”

Needless to say no more ginger snaps ever graced his lunch pail again.

Preheat oven to 350 degrees F (175 degrees C).
Sift the flour, ginger, baking soda, cinnamon, and salt into a mixing bowl. Stir the mixture to blend evenly, and sift a second time into another bowl.
Place the shortening into a mixing bowl and beat until creamy. Gradually beat in the white sugar. Beat in the egg, and dark molasses. Sift 1/3 of the flour mixture into the shortening mixture; stir to thoroughly blend. Sift in the remaining flour mixture, and mix together until a soft dough forms. Pinch off small amounts of dough and roll into 1 inch diameter balls between your hands. Roll each ball in cinnamon sugar, and place 2 inches apart on an ungreased baking sheet.
Bake in preheated oven until the tops are rounded and slightly cracked, about 10 minutes. Cool cookies on a wire rack. Store in an air tight container. 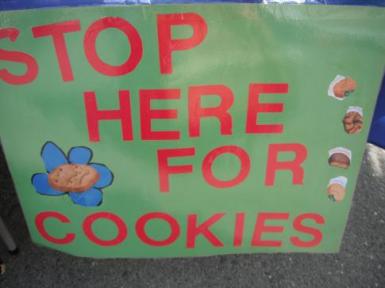