About a year ago, I shared a couple of Adelaide Hunter Hoodless’ apple recipes with you. Click on this link if you’d like to re-read that post.

This year, I want to share with you (read: brag about) my recent triumph in the pie-making department. One of the members of the Women Inspiring Women WI is a prize-winning pastry maker. Elaine Tully will hold a couple of workshops later this fall for our WI, but first she wanted to have a technical rehearsal at the church kitchen. There I made my first ever peach pie. OH. EM. GEE. as they say. It was wonderful good!

My hubby tried an apple fresh and found them rather tart. When I told him that I had made a pie he asked, “Did you put in lots of sugar?” Of course, I did, we’re talking brown sugar here!

Toss the apples in with the following:

Place in pie shell and dot with

Cover with the top crust, flute edges, and slash the top to create vents for steam to escape.

Bake at 375 degrees for 40 to 45 minutes until the crusts are a pale golden colour.

About WI
Women’s Institute is a local, provincial, national and international organization that promotes women, families and communities. Our goal is to empower women to make a difference.

The idea to form a national group was first considered in 1912. In 1914, however, when the war began the idea was abandoned. At the war’s end, Miss Mary MacIsaac, Superintendent of Alberta Women’s Institute, revived the idea. She realized the importance of organizing the rural women of Canada so they might speak as one voice for needed reforms, and the value of co-ordinating provincial groups for a more consistent organization. In February 1919, representatives of the provinces met in Winnipeg, Manitoba, to form the Federated Women’s Institutes of Canada.

The identity of the Women’s Institute still lies profoundly in its beginnings. The story of how this historic organization came to be is one that resonates with women all over the world, and is engrained in the mission and vision Ontario WI Members still live by today. CLICK here–

I still have this cookbook but some do not and have asked where they can get one.. It is all online now and you can Click here- to get those fabulous recipes and you can also see their blog also.. 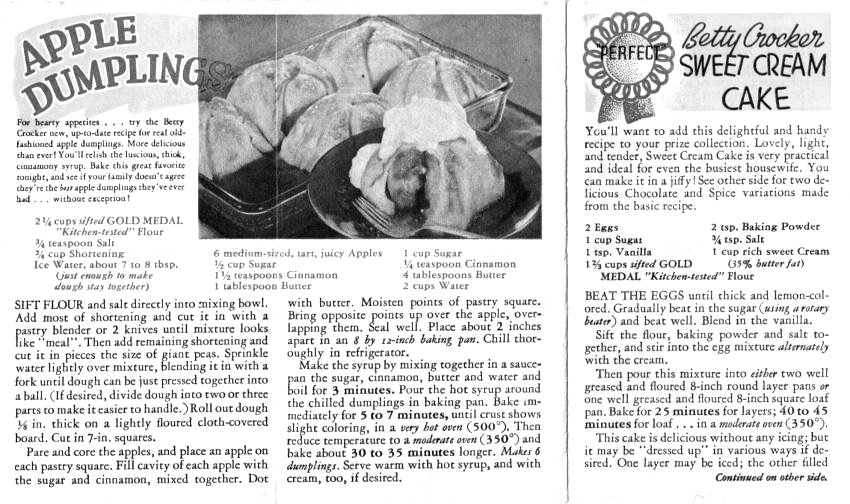 I always believed in Betty Crocker– well, I wanted to believe that the first lady of food was real. Similar to finding out that Nancy Drew’s author Carolyn Keene wasn’t real, one day Betty Crocker was no longer real either. I realized that dear old Betty was just a brand name and trademark developed by the Washburn Crosby Company.

The story goes that they chose Betty as her name because it sounded as American as the Apple Pie she would show us all how to make. The original Betty Crocker New Picture Cookbook was first published in 1951 and everyone knows someone that has a Betty Crocker Cookbook in their home. Betty, like Margie Blake from the Carnation Company, was important to me as my mother died young, and food somehow replaced parental figures. Well, that’s what a few years of therapy taught me.

The recipes from any Betty Crocker Cookbook are from leaner times, and in the 50’s my mother used to make Tuna Pinwheels and Canned Devilled Ham Canape’s for her canasta parties. Bernice Ethylene Crittenden Knight was a stickler for an attractive food presentation, and she also made something called Congealed Salad for holiday meals. A combination of Orange Jello, Cool Whip, crushed pineapple, and wait for it, shredded cheese. I think my Dad called it “Sawdust Salad” and I seriously tried to remain clueless as to why. I’m sure everyone has a family member that says they’ll bring a “salad” to a family dinner, but then they bring some Jello concoction. Bonus points if it has marshmallows.  Actually I feel more justified in calling anything a salad if I dump leftover taco beef and salsa onto a little lettuce topped with shredded cheese.

Everyone baked bread, but I guess not all people like Betty’s Fruit Loaf recipes because on page 78 of my vintage Betty Crocker cookbook the former owner of the book hand wrote:

“Terrible, even Nookie the dog turned it down.”

The steamed brown bread baked in a can was another baking tragedy. It was so horrible my Dad took my Grandmother’s failed recipe target shooting at the Cowansville dump. I would like to think that some of those rats got to feast on one of those brown breads. Of course, maybe after sampling it, they might have wanted to be put out of their misery.

I also used to love Betty Crocker’s 7 minute-frosting that my mother would put it on some of her 1950s nuclear coloured cake. Then there were the Floating Islands, homemade Rice Pudding, chilled with whipped cream and cinnamon on top. My grandmother’s specialty was steamed English Pudding, and when she was done, she would soak lumps of sugar with orange extract and then place them decoratively around the pudding. One by one each lump would be lighted with a match which would result in a near miss family dinner explosion each time.

Nostalgic triggers a story about our lives, helping us reflect on traditions and moments about the days when our  parents and grandparents were alive. That’s why we should never lose print recipes, and real paper-based cookbooks. Those mystery meat recipes, books, and foods that were the same colour as radiation will always resonate with us because we get to see and relive the gravy stained favourites, and the personal notes in the margins. If reading about Betty Crocker has you craving a big slice of cake, you’re not alone. Time to bake!

You can also read Linda in The Townships Sun and theSherbrooke Record and and Screamin’ Mamas (USACome and visit the Lanark County Genealogical Society Facebook page– what’s there? Cool old photos–and lots of things interesting to read. Also check out The Tales of Carleton Place. Tales of Almonte and Arnprior Then and Now.