Approximately 10 km from the village of Athens is Charleston village and it’s jewel, Charleston Lake. The village features quaint, well-kept homes in a peaceful neighbourhood. The local marinas offer many services, including boat tours. Charleston Lake offers fishing for bass and lake trout and hosts The Renegade Bass Tournament.

Charleston. — A Village on Charleston Lake, in the Township of Escott, County Leeds, 18 miles from Brockville 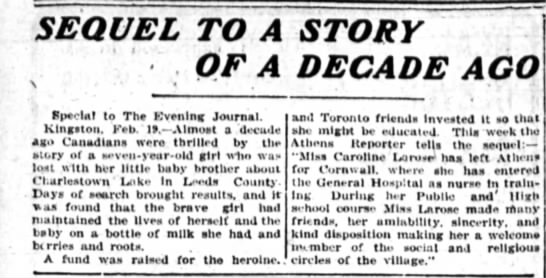 When you hike the Blue Mountain Trail it is intended for more experienced or at least more motivated hikers. This isolated trail can only be accessed by water via Huckleberry Hollow, and it is extremely rugged. It is no wonder that young 7 year-old Caroline La Rose got lost when her family was camping at Charleston Lake. She wasn’t alone, and was carrying a small infant that she was entrusted with his care as the family was berry picking. Baby Bertha was the daughter of Leona Brown, her mother’s oldest daughter.  She was brought into the home when she married Isaac La Rose. Confused? Have you checked out family history from way back then? Everyone is related to everyone. Let’s carry on…

With bare feet young Caroline walked into the woods and became lost and began to yell for help. When no one answered her call she walked over terrible terrain for miles until she found a shanty. Caroline found a tick mattress for bedding and mixed berries with water to feed young Bertha putting the baby first instead of herself. The children’s disappearance was quickly noticed and the search began with the first Reeve of Athens Watson G. Parrish set out in his steam yacht with his son Arthur hoping to find the two children quickly. Caroline had been missing for 4 days at that point Parrish got involved, but through some miracle she saw the steamer from the shore of Crawford’s Point.

Frantically trying to get the steamer’s attention Parrish saw her and quickly rescued her and the wee bairn and brought them to his cottage for food and warmth. There she met the daughter of Benedict Arnold, Jessie Arnold who was Parish’s niece. So enthralled with her new friend she named a new doll Jessie in honour of her. In a sad note, Bertha died at age 2 years. So what happened to young Caroline La Rose? Check out the wonderful story by Sally Smid.—THE HEROINE OF CHARLESTON LAKE

Lake Monsters – is there such a thing or are they just figments of our imagination? Do you ever wonder what lies beneath the surface of some of our deeper lakes in the cool, dark depths? We’ve all heard about the Loch Ness monster, but what about our own bodies of water in Ontario and, more specifically, eastern Ontario and the Land O’ Lakes area. Some believe the larger lake serpents could be rare, shy descendants of giant, long-necked reptiles called plesiosaurs which lived during the dinosaur era more than 65 million years ago.

In 1980 Harold Harris of Aylmer is sure he has seen one at Lake Baskaton, north of Maniwaki. He said he saw the beast as he went for a swim. He said it was a serpent’s head that was green and the size of a horse and about 15 metres long. Monique leFrance who worled for the Ministry of trouism hunting and fishing said she had heard of old Indian tales just like the ones about Lake Memphremagog in the Eastern Townships.

Of course some doubt the story and some even said it might have been a moose as they will dive up to 15 feet in depth looking for food. To this day it remains a mystery.

Dino of Charleston Lake–yesterday I found this:
Charleston Lake is situated in Canada 30 miles north of Kingston. It is approximately 9 miles long and about 4 miles wide with a depth of over 450 feet in some places. There is said to be a strange creature living in the lake nicknamed Charlie by the residents. It has been recorded as being seen for over a 100 years.

In 1897 Noah Shook claimed he was pursued by a large, hissing creature.

In 1947 three fisherman reported that they had seen a dinosaur type creature swimming in Tallow Bay Rock.

In 1994, Mr. H while visiting the place his father’s ashes were scattered on the lake , saw what he described as being a large rain slick in the water. “I had never seen any thing in the like that before” he said.

In 1997, a couple travelling at night claimed they saw waves that were 3 to 4 feet high, caused by something in the water. There wasn’t any wind and the water was calm and there were no boats in the area.

Charlie is not the only strange creature in the area:

There have also been reports of a snake like creature, living in Red Horse Lake located in nearby Lyndhurst. The creature is said to be greenish black, a head like a horse with small breathing tubes on its head and it about 60(20 metres) to 80 feet ( 26 metres) long.Fisherman have reported seeing a long black body in the water

In the 1970s, an unnamed woman , said she was leaning over her small row boat in order to grab a bullfrog for her pond when a creature “just popped its head right out of the water and looked at me!” The woman screamed from fright and the creature dived beneath the water leaving foaming bubbles. The woman left immediately.

Both lakes are in The Charleston Provincial Park. The park also provides habitat for the rare black rat snake which is also the largest snake found in the area. The Black Rat Snake (Elaphe obsoleta) sometimes called a pilot black snake is a non-venomous species . It prefers wooded areas and is known for having the ability to climb the trunk of large mature trees . It is known to reach lengths of 8 feet( 2.6 metres) but one was found that was 9.1 ( 3metres)feet long.

Now what if it fell from a tree into a lake? That would explain the hissing creature that chased Mr Shook all those years ago. It may also account for some of the other sightings but not all of them. Just a thought for Monday.