With files from The Keeper of the Scrapbooks — Christina ‘tina’  Camelon Buchanan — Thanks to Diane Juby— click here..

The settlement was founded by Daniel Shipman,

who built the first successful mills in the 1820s, built a bridge across the

river at the site of the current Maclan Bridge, laid out the street grid on

the south side of the river in the 1830s, and built a house on the south

side of the river c1835. Another early settler, Edward Mitcheson, built a

much of the street grid on the north side of the river. By 1850, Shipman

of the community. All of these features survive in downtown Almonte

Arriving from the north along Queen Street, one descends a gentle slope towards the Maclan Bridge.Before arriving at the bridge, a threshold is marked by a distinct collection of stately homes and a tight assembly of commercial buildings, which beckons the traveller to the commercial centre that lies beyond the bridge. Upon entering the bridge, one is struck by the commanding old Town Hall, set against a vast river landscape that opens up on both sides of the bridge. The sense of arrival is experienced first when arriving on the south shore of the river, and again at the intersection of Mill and Bridge Streets.

The Maclan Bridge serves as the approximate eastern boundary of the historic urban centre of Almonte, and the views from each side reflect this condition. The view to the east is a pastoral scene dominated by the treed riverbanks, and is largely rural in character. Looking west, the view includes the Town Hall, the Wylie Mill, CPR Bridge, and the first waterfall. The houses on the north bank are largely hidden by trees, although the Wylie and Menzies houses are prominent. The view reflecting the milling era remains largely intact.

Almonte Bridge- Unsurpassed in the County

The Back Bridge of Almonte April 1960

This week I received a few scrapbooks from Diane Juby wife of Mississippi Mill councillor John Dalgity. John had contacted me about them and I vowed to record as much as I can from the scrapbooks with Lanark County history and then after they could decide where to donate them.

These scrapbooks were made by Christina ‘tina’  Camelon who married married John Buchanan. I am over the moon that I can share all this with you thanks to Diane Juby. These are national treasures.

Hi Linda… these are my grandparents. Christina ‘tina’  Camelon married John Buchanan. He died late 40s from TB and worked for railroad at Glentay. The bottom pic has my dad in it. Allan Buchanan. Please enjoy and if you want more info contact me . Thanks so much for doing this… maybe you could say they were from her scrapbooks. She was a widow early on in life…. great at baking and sewing .

Most of these photos were taken in Middleville and Perth 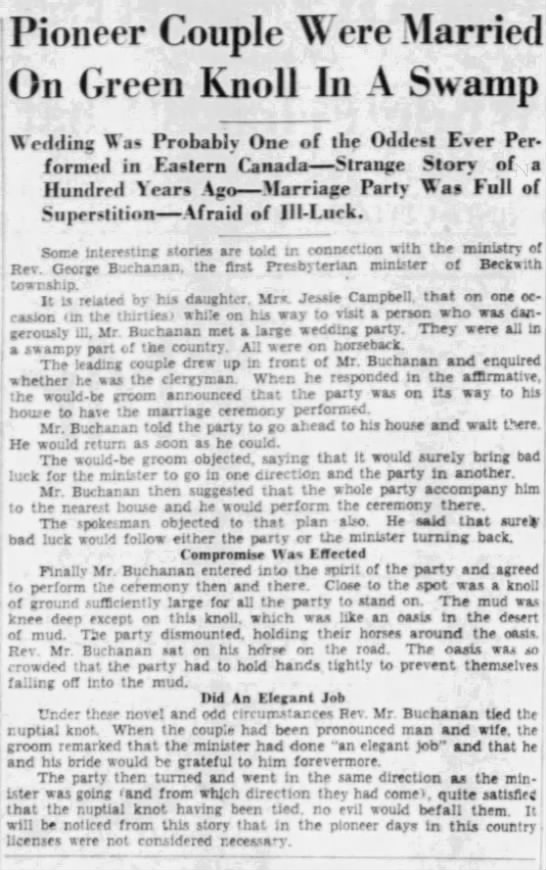 The Man of the Walking Dead of Maberly

Memories and Mentions of Names in Maberly