Glenn Clark–My aunt grew up in Ottawa South and spoke of the beach that predated Brewer Park adjacent to the Tennis club. It was called Bathing Island. You accessed by a walkway next to the tennis club and you had to crossed a foot bridge to access the island. The foot bridge was assembled only for the summer months. Bathing Island was a public beach, whereas Brighton Beach was privately operated. The Rideau River was totally reconfigured in this area eliminating this beach. I am not sure whether this occured when the ill conceived pond was created or whether the reconfiguration occured before that. Nevertheless, my aunt mentioned that she swam at Bathing Island for that last time when she was first pregnant, so that was 1954.

if you compare 1958 and 1965 layers at GeoOttawa, it’s clear that the two islands were eliminated when the pond was constructed (in 1963 by Ottawa Journal reports) as you guessed. The 1958 view shows the pathway to the islands you mention, and I have no doubt people swam there. It does not appear, however, that you could get as close to the islands with an automobile as is shown here. I think this is the beach just adjacent the tennis club as Bob Ellsworth remembers, and those cars are parked along the laneway that extended south to the river from Seneca and Cameron, between the park and the tennis club. On a side note, Brewer Park dates back to ca. 1920. A 1923 Ottawa Journal story mentioned that the Ottawa South Recreation Association wanted to have the Ottawa South playground named Brewer Park, after alderman T.H. Brewer “who was largely instrumental in getting it.” This Journal clip from Mar. 12, 1929 reports on the official naming (perhaps delayed until Brewer was no longer a serving alderman)

Brewer Park Pond is an artificial pond located in Brewer Park in the neighbourhood of Old Ottawa South in Ottawa, Ontario, Canada. It is connected to the Rideau River via a culvert.

The pond was constructed in the early 1960s as a “swimming hole” from an area that had previously been a wetland of three small islands with channels between them in the Rideau River. The pond, which was completely separated from the river, was used for swimming until the pond was infected by bacteria and the spread of algae. The provincial health department ordered the pond’s swimming facilities closed in 1971. During the 1970s, the pond was used for model yacht regattas.

In July of 1971 the provincial health department ordered Brewer Park pond closed. Regional medical officer of health Dr. L. H. Douglas informed the health department ,who considered the swimming facilities a pool, not a beach as the city had interpreted it, and therefore it was subject to more stringent health regulations. City Hall sources feared the popular swimming area would never re-open if the health department interpretation was correct, since the cost of upgrading Brewer Park to “pool standards” would be very prohibitive.

Ann PepinI went there too and saw Paul Anka singing there!! He was 15 at the time

Charlotte SmithLived on Sunnyside and we used to go down to this beach all the time in the late 50’s. No buildings just the water. You could swim and walk around it and catch frogs and tadpoles. It was always fun. Just us kids. Before they closed it and made the man made pool thing, thing with the concession stand and change rooms. Once when I we were down there my friend Edie and I watched them pull two men out who had drowned.

Valerie McCormickWe swam just south of here in the Rideau river adjacent to Brewer pond in the late 60’s. We would try to make it all the way to the island. There was a strong undercurrent. We also swam on the other side of the” river past Billings Bridge at a place we called the “Rope” or the “Rock”.

Debbie DusenburyI remember my brother and I walking every day in the summer from Catherine and Bronson Ave …we’d spend almost the whole day there …mid to late 60’s when there was a beach. Even went to the indoor swimming pool at Brewer’s. I do not think the beach has been operational in many many years now.

Janet LarocqueThere was Brantwood beach and further down was Brighton Beach. My sister was a lifeguard at Brighton and I think it cost 25 cents to enter

Bruce HewatLooks like an ear infection waiting to happen.

John A. ReidI almost drowned there in that same time frame! Very glad I didn’t

Fraser CampbellI used to swim at the foot of Deschene Avenue in Woodroffe. Also at Ottawa Beach Motel on Carling where Andrew Haydon Park is today. There was also a pool on Robertson Road where there were a bunch of cabins and a larger building on the left hand side going from Bells Corners to Hazeldean. I can’s see any trace of that place now.

John BondThe bathing islands along that stretch of the Rideau were joined to form the Brewer pond swimming area in the late ’60’s. By the early ’70’s the beach was closed because of poor water quality.

John KissI remember swimming there as a child in the late 60s. The water was siphoned off the Rideau every morning and pumped out in the evening. I remember it as very murky and nasty…

Jaan KolkYes, the artificial pond was built in 1963. (It was to be ready for the centennial year, built on a relaxed schedule; Mayor Whitton accused the head of Parks and Recreation of improperly speeding it up without approval.) The natural beach adjacent the tennis club property looks like the only one in the park in 1958 GeoOttawa overheads. But I think you meant downriver.

Jaan KolkThat’s the artificial pond built in 1963. But what about the natural riverside beach pictured in 1956? I see in Google maps earth view there’s a small dock there now.

Here is a comment I received last night and wonder if anyone remembers this path as Marilyn commented on:
“As a child, on my way to Brewer Park and Bathing Island (in Old Ottawa South) my older brother by 6 years used to show me some old graveyards not to far – especially the one close to the playground. It was down an old, never used at this time path, and at the end of it, there was a small graveyard. ‘Scared the ‘Devil’ out of me (his intention) but haven’t checked it out all these years later. There were others within the city also. Guess it was allowed at the time.”– Marilyn–

Danny DelahuntThé only old graveyard I can think of in the area is at the Billings estate. And yeah it’s down a old path if you go up the back way.

Ken HartenGrew up on Glen Ave and never heard or saw an old graveyard around Brewer Park. Older chums would have shown it to me just to scare the crap out of me back then. I agree with Danny Delahunt comments regarding the Billings Estate graveyard.

Norman TooneYep Billings Estate grave yard. Recall that long before the estate was taken over. Used to be able to drive up from Riverside to get to the house and barn, long before Cabot was even thought of and right out to Pleasant Park. 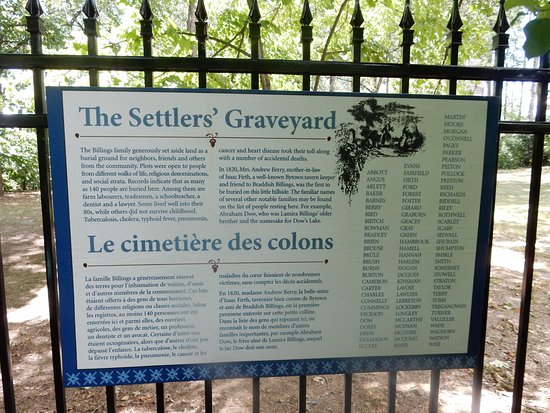 The Beaches of Ottawa

Swimming at the Dam, St. James Park and Other Things