Body snatching was once notorious and had many particularly atrocious offences. Especially at St. James Cemetery in Carleton Place where a woman’s body was once desecrated from the coffin and later found dumped into the cellar of the Kingston Medical college and re-embalmed. But, years later the burying ground custodians could scarcely recall an instance of the kind within their experience. At its peak grave robbing was a profitable vocation to keep a number of  people employed.

Aside from other considerations, it  later would be next to impossible to get a body out of St.James cemetery without being detected in the act. In the late 1880s the grounds were  patrolled through the night, and precaution was taken to prevent depredations of any kind.

A cemetery superintendent said: “The body snatching business ceased to be profitable when we used a pine box to enclose the casket”. Before the introduction to this outer box it was comparatively easy for the grave robber to narrow excavation at the head of grave, lift the wooden lid over the through which the face of the is seen, smash the glass, insert a hook under the chin and jerk the body out of the grave. But after the improvements the grave had to be excavated and the pine box unscrewed before the coffin was accessible. This takes some time, and so increased the chances discovery that few cared to engage in the business.


Unlike years before, the only bodies for which a high price was asked were those of persons dying in some mysterious way or some rare disease for which physicians or others interested were often willing to pay to induce the body snatcher to long chances.

Of course the body of a person of great wealth was always more or less in danger, but their ire usually made practically impenetrable. While there was little body snatching after the late 1800s work done by the body snatchers of a past generation often comes to light when, through the wishes of relatives or otherwise, it becomes necessary to transfer a corpse to another spot.

Many an empty was found from years past, and the cemetery men had to conceal from the relatives the absence of the remains their resting place. The custodian would seek to convince the friends of the long departed one that it was better that they should not look at the corpse, that it was decayed recognition, and that the sight of would be unpleasant to them. If he succeeded, as he usually persuading them to forego the of another last look, he manages enough sand and earth into the coffin to give it the proper weight and eludes suspicion.

In other cases the head of the coffin is found to have smashed in and there are marks of ghastly body hook under the chin,  the remains are intact, showing the robbers were interrupted at their work or found that they had the wrong corpse.

But, the value of a corpse depreciated as the years went by. The physicians and schools got all the bodies they wanted at the hospitals. 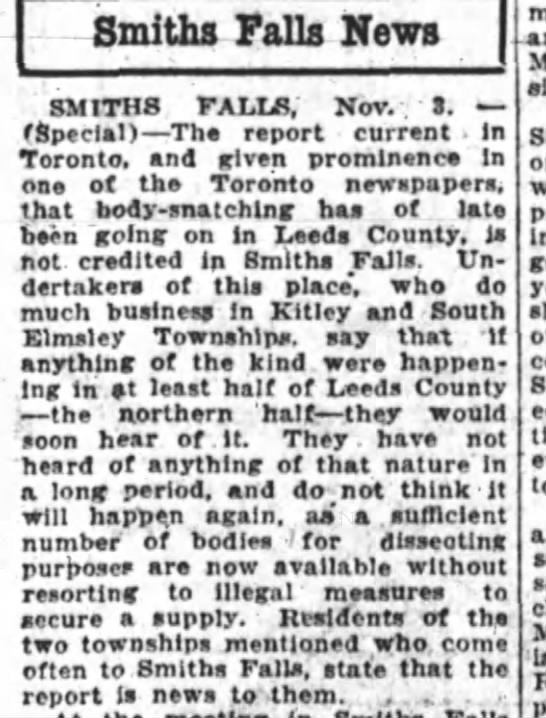 The Invasion of the Body Snatchers of Lanark County

Macabre Jobs of the Past–Resurrectionists