Everywhere I go I see mattresses tossed out on the sidewalk, and there are some in my area that have been sitting outside for a couple of weeks. While I know they have to go somewhere- they are not making the town’s esthetics look good by sitting there. I am not going to mention where they are, but the photos that are on here are from a clean-up campaign I helped with in in Oakland, Ca. But no one is blind. 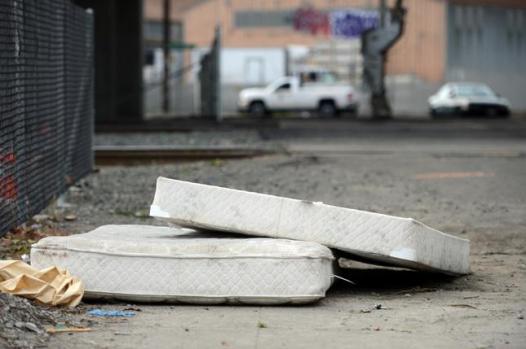 Bedbug infestations in Montreal are at an all-time high, say exterminators who can hardly keep up with demand.

“In 2000, I would handle one or two bedbug cases a year,” he told CBC’s French-language service, Radio-Canada.

Here is a story I wrote a few years ago that could happen.

The Bed Bugs are Jumpin’ like Jumpin’ Jack Flash

The bed bugs are going all literary on us now and now have been spotted in the bowels of  Montreal. They were last seen on the reference desk of the Grande Bibliothèque and also checking out the words of the latest True Blood novel.

The library user who wishes to remain anonymous due to fear of her landlord finding out about the pesky bug enjoying the latest Sookie Stackhouse book had no vendetta against the Montreal Library system. She placed the infiltrated book in a zip-lock bag and complained to management, yet the library matron didn’t really care and said,

“We’ve had reports [of bed bugs] from all over the place. We’re spraying all over. But we hadn’t heard they’d gotten to Literature yet.”

So what happens next ? If they are not careful the inhabitants of the library might end up like the two subjects of my fictional story. Or is it fictional?

It was the beginning of the end…… Linda Seccaspina

Matt and Steve sat there wide eyed as they watched their regular Friday night viewing of Dateline. They could not believe what they saw, and were literally shaking. The NBC program had put it all out there in black and white for everyone to see. All those mattresses people threw out everyday never went into landfill sites. They were picked up by mattress dealers and taken to special places to be recycled into new ones.

Apparently, they had been doing this for years and stripped the fabric off, and then sprayed them with a pestitcide.  Newly recovered, they were sent to bargain mattress places to be resold.

Matt gulped his beer down quickly and remembered yesterday in technicolor. They both had fought a vicious house fire and bed bugs had been everywhere. The little Hannibal Lectors had run like bandits away from the flames and had latched on to their equipment and gear. They screamed as the bugs crawled all over them. When they got back to the fire station they had to quarantine all their stuff so the bugs would not infiltrate them.

There was not a place in the city of New York where you could walk now without being bitten. Toronto was next, and half the population of Montreal had been destroyed by the super bugs.  It was only a matter of time that every city would be literally be eaten alive.

People were blaming the Clinton administration as pesticides had been used for years and then they decided to ban it. Now the world was slowly dying because of it.  The reality of it all was that Clinton was not to blame – it was actually a company called *”Monsanterino”.

For years Monsanterino had controlled the seeds which created the food that people consumed.They had introduced a lot of genetic horrors to the world’s food chain, and they did not seem to care. People started getting sick with celiac disease because their insides could not digest the hybrids. It was only part of a larger plot to take over the world.

Secretly they had bred the bugs and introduced them slowly into the cities. They knew they would make money hand over fist manufacturing pest control products. The mattress dealers, thinking they were spraying the Monsanterino pesticides, were actually spraying a hormone to attract the pests.

Steve looked at Matt and had tears in his eyes. He started to speak softly and then his voice grew into hysteria.

“Matt, the bugs have doubled in numbers since yesterday, what’s next?”

Matt looked at him and said,

“I guess you didn’t hear, senator Mike Duffy died yesterday. His office became so infested he did not get out in time. He’s dead Steve, he’s dead!”

They both looked at each other and realized that there was no hope now, and they were everywhere! It was only a matter of time now. Matt looked outside and saw a huge billboard that had a giant bed bug with an exterminator’s address on it. It was now officially the city that never sleeps. The national crisis was not unemployment now, it was bed bugs.

It was time to go to sleep and they headed up to their separate rooms. They each put on their newly purchased protective flea collars made by “Monsanterino” and crawled into bed. They would be safe for another night. Sadly, they were the last tenants alive in the building. All it takes is one pregnant bed bug to fill a building, and within three weeks most of the tenants had met their match.

Images (except the bed bugs thank you very much) and Text: Linda Seccaspina 2013

The story about the mattresses being picked up and reused is true and was on Dateline. I have never bought a discount mattress again:)