Doug B. McCarten We sure had a great time in that arena……

Linda Gallipeau-Johnston Wow – nice photo Llew – did not think I would ever see that again!!

Llew Lloyd I remember that. The lights would be turned down and there was a ” moon light ” at each end of the rink .

Llew Lloyd Was ” Greensleeves “ the only record they had ? I remember if you helped clean the ice at the Senior B game , you got a free public skating ticket .

Doug B. McCarten Nope there were some waltz music 🎶 too lol particularly during moonlight skates

Llew Lloyd The outside was ugly, but the memories made inside were beautiful .

Linda Gallipeau-Johnston So so right!

Jim Mikolaitis
I remember seeing Santa at the back of the rink after the parade and the firemen would give you a bag of candies. We would then circle back around the rink and re-enter the line to get another bag! Haha!
My BAD???
I also remember the “trough” urinal in the men’s washroom and man did it stink!
Funny what you remember! Haha

Valerie Edwards Of course, many a good skate there

Dale Costello Oh so many treasured memories from the Beckwith Street Arena. I was very fortunate to have been raised in the era when winter activities centered around the rink. Played many a hockey game from Peewee, Bantam, Midget and Juvenile throughout the 50,s, under the coaching of Lorne Mcneely. Fabulous times and tons of memories.

Ray Paquette Remember how cold it was? Between periods we used to go into the rest rooms to get warm. During the summer months when ice was absent the arena was used for other community occasions including the annual CPHS Cadet Corps inspection as well as other events.

Penny Trafford I remember the skating, Halloween Costume judging, the arena’s own unique smell is still in my brain. Great memories.

Donna Mcfarlane played broomball there one year it was so cold

Cindy Showers This is so interesting.to read!


Ann Stearns Rawson Loved meeting up with friends at that arena for a weekend skate and then going to the Olympia Restaurant for hot chocolate.

Ted Hurdis I started my hockey there as a peanut. We played 1/2 a year then it was shut down. The dressing rooms were up some steep stairs especially for us little lads. Loved the old barn from their one public skating song down to the frozen water fountain. Hahaha

Ted Hurdis We use to have a girls hockey team too. Even way back then my sister Nedda played on it.

Norma Rotzal Skated there many times

Linda Gallipeau-Johnston There was no place like the old rink!!!

Marilyn White Loved moonlight skating night on Thur. They covered the big light at the ends of the rink with orange paper.

Llew Lloyd Linda . I think this one originated with one of your other followers .
Image may contain: house, sky and outdoor Photo Carleton Place and Beckwith Heritage Museum 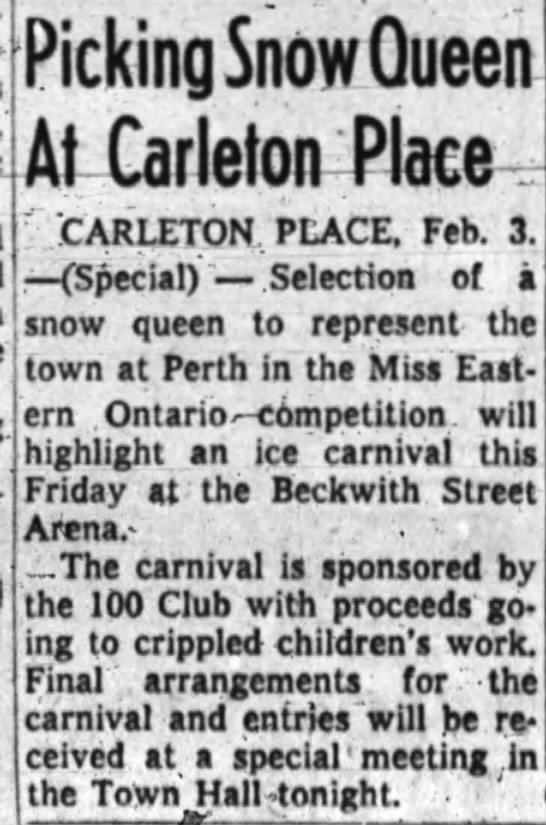