There were also three sisters of the 14 children: Dorothy, Ruth and Lulu-

Remember when the Bingleys played the Barrs? One of the most memorable games played in the Lanark area was when the Bingley brothers met the Barr brothers in an exhibition game in 1962.Nine brothers on each team, with a few Barrs to spare.

As part of the village’s centenial celebrations,someone thought about bringing the two families head to head on the baseball diamond. So alonf with the beard-growing contest, the hotly contested tuf-of-wars, greased pig catching street dance, the ball game was the afternoon highlight. It was the biggest crowd ever to witness a ball game in Lanark.

The Bingley familiy had produced an outstanding number of ball players, many who were playing on teams at that time. They had also won a game at McDonalds Corners some time earlier playing as a family team.

The Barrs had 11 boys, with Leonard and Pete who were known as outstanding ball players, but the others had played periodically. That day however, Pete was stationed in Germany in the Canadian Armed Forces. The Bingley bats struck early and often, while the Barrs struggled against a tough pitcher. Dan Barr, then 25 and the catcher remembers that they couldn’t get many timely hits. When the final out was made, the score was a lopsided 15-1 for the Bingleys.

But, everyone had enjoyed the competition and the good sportsmanship. Vernon Bingley, a home run hitter that day, recalls that there were not a better bunch of guys than the Barrs. Dan Barr rememebers that he contributed to the Barr’s one run, but his team as a whole didnt have a great game. He recalled with a grin that maybe there was too much celebrating before the game that might have been the cause. But, no one really cared about teh score, it was just the day that Bingleys beat the Barrs.

with files from Tom Shoebridge

I Think it’s Time for some Donkey Baseball!!

Everyone needs to be remembered.. and after I saw the photos of these guys– yes mam, they were part of Almonte’s part history LOL-All photos of The Turd Cats by Gail Barr

Laurie LadouceurWow Bruce has not changed much but grayer

MJ WhittakerGreat pic I remember Jimmie spending a lot of time at our house and when he and my brother Donald had their pig farm.

Diane CampbellLynda Christie awww so nice to see those pictures of Jim.

Kathy DuncanWow! Haven’t seen these 3 for a long time

Jim VaughanHahaha got into some trouble with this bunch …awesome

Lynda ChristieJimmy was the greatest Dad ever. Our two kids love seeing pictures, hearing stories ! Now that they are older. Lol

Lynda Christie I have other pictures!! Jimmy is a bikini

Sylvia McGeeHey Marty. Thanks for the trip down memory lane

Gail BarrThe lads sure knew how to have fun. They dressed up as women and had a “float” in the parade. Not sure what the theme was??

All photos of The Turd Cats by Gail Barr

Marty TaylorWhere is the house located in this pic?

Gail BarrThis home was outside CP Tia and Dieter Licher owned it. Donald and Jimmy lived there. They had a pet pig and goat. Good times

Sylvia McGeeGail Barr they trained Danny the pig to live indoors, trained to oink at the door for a bathroom run and again to come inside. Cute wee pig when they first thought to bring him in, sitting on their lap for tv nights. At the end, she took up the entire couch ! One morning she died … that’s when they found out he was a she. Originally intended for food , but no one could bear the thought of eating Danny. Memories … hope I got the facts straight … Lynda? Don?

All photos of The Turd Cats by Gail Barr

Gail BarrSafety First!! Don Cameron and John Leishman dancing on the hood of a moving vehicle in a parade

Marty Taylor Before everyone became so sensitive about absolutely everything!

Thanks to Middleville historian Laurie Yuill I have saved a few of the many photos he has from the photo book of Aggie Yuill from Middleville. Thanks Laurie!!

Roy Yuill in front of Archie Rankins house in Middleville in 1927. He was 4 years old. He grew up to work in Lionel Barr’s General store and at Barr’s sawmill. He later became the local electrician servicing many parts Lanark County.– Photo by Laurie Yuill 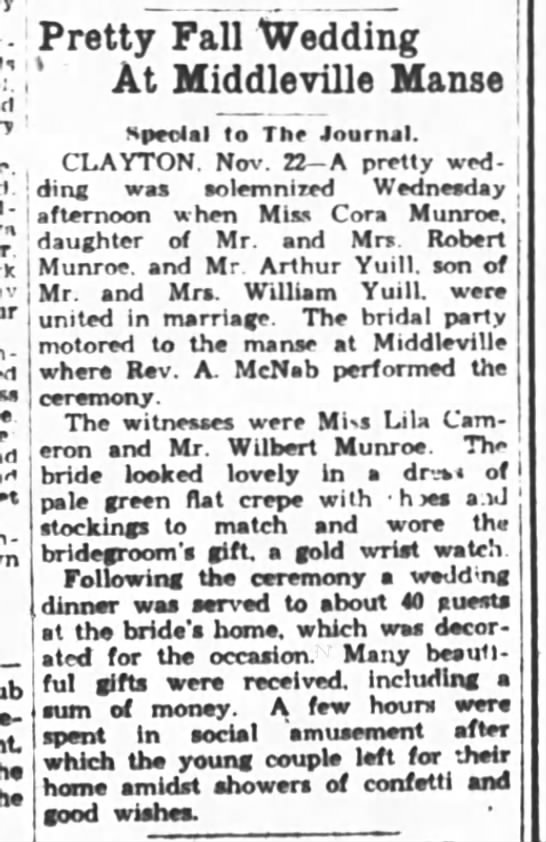 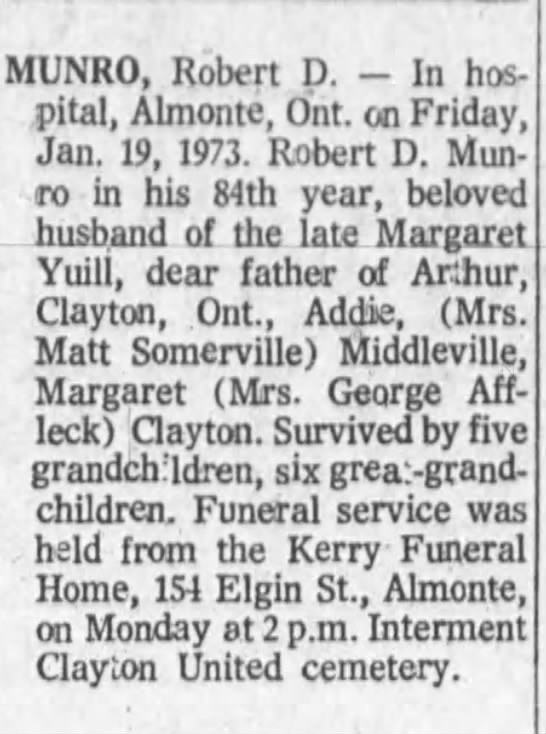 The Old Barr Store in Middleville, 1936

The Middleville Cheese Factory in 1936

Laurie Yuill‎ sent this… Thanks Laurie!!

It’s now full 100 years or more
Since I became the corner store
Who cut my timbers, squared my frame
I never will divulge his name.
For visions fair they had that day
Of men and women sad and gay
Who’d enter through my open door
And carry out enough and more
To satisfy their own demands
And others living on their lands.


As I look back across the years
Fond memories come that bring the tears
Father’s sons and grandson’s too
Have bid this good old world adieu
I’ve watched them carry off their dead
And bury them; And then I’ve said
I’m only wood and glass and stone
And here I’ll stand Th’l all alone
And serve the children yet unborn
Who seek my shelter from the storm.

For many years I’ve faced the west
And stood the storm, as you have guessed
That blew into my face until
I thought they’d blow me from my sill
But here I stand these many years
Defying all their doubts and fears
And when you come to take me down
I’ll certainly put on a frown
And ask you why you treat me so
When I served you well, you know.

As I have stood here year by year
Strange sounds have come upon my ear
I’ve heard the neighbours chatter much
About the weather, crops and such,
I’ve heard them cuss, spit and swear
And how I’ve blushed: and then declare
Th’o I’ve stood here for one hundred years
I’ve always tried to bring good cheer
And exercise my self restraint
That men could make no red complaint.

My shelves have held all sorts of goods
Cotton and footwear and such foods
As keep the people strong and well
And patent medicines that sell
For double what they really should
I can’t complain; I’m only wood
And news I’ve brought from day to day
Some of it sad and some of it gay,
Letters of love and business too
Is some of the work I’ve had to do.

On Sunday I have closed my door
Believing that the corner store
Which serves John Public thru the week
Would give the people time to seek
A place within the House of God
Where many noble men have trod
And join the neighbours as they sing
Their praises to the mighty king.
I’ve listened to the old church bell
Reminding men of heaven and hell.
And viewed the Church spire far above
Assuring man that God is love.

I’m older now than all the folks
Who sit and spin their funny jokes;
McKay’s and Borrowman’s, Nairn’s and Bowes’
Rodgers’, Somerville’s, and Munroe’s
Naphan’s, Manson’s, and Mather’s small
Scoular’s, Percy’s and Affleck’s tall
Barr’s and Blackburn’s, Moffat’s and Yuill’s
McPhee’s and teachers of the schools
Guthrie’s and Penman’s and Machan fair
Croft’s and Rankin’s with talents rare
Langstaff’s and Liddle’s, Lawson’s, Reid’s
Mitchell’s and Taylor’s and Dodds’ with good deeds
McCurdy’s, Gibson’s and Virgin’s too
Have bought my good, both old and new
Peacock’s, Pretty’s, and McIntyre’s
Have all enjoyed my cherry fires
Preacher and doctors and transient guest
Have all sat on my steps to rest
Or entered thru my welcome door
To patronize the corner store.

If they had put a little thought
Upon my interests, and had bought
A little paint and turpentine
I wouldn’t now have cause to whine
But you’ve neglected me so long
I’m old and weak, I should be strong
But now the old must stand aside
Give place to new, the village pride
And now I stand here nearly dead
Beside my daughter, white and red.

But every old dog has his day
And so I’ll say to Jim McKay
My friends have all deserted me
My shelves are bare as you can see
So come and take me down at will
Ceiling and wall, floor and sill.
I wouldn’t like to stand before
My daughter with her lovely door
Through with the children, bright and gay
And older folks upon their way
Shall pass to get their food and mail
Thru’ summer’s sun and winter’s gale.

But just a word before we part
My daughters care is on my back
She’s lovely with her windows bright
Reflecting in the stormy night
She’ll serve you well for many a year
So white and clean, she’ll bring good cheer
I ask for her the courtesy
Which thru the years you’ve given me.

I leave you now with no ill will
To any one in Middleville
Perhaps some day they’ll find a place
Where I can hide my dark brown face
Perchance they’ll turn me outside in
And cover up my head with tin
It’s possible that I may house
Some horses, chickens or some cows
And then I’ll hold my head up high
And look my neighbours in the eye
So if you chance to come my way
Just look across and shout “Good day”,
I’ll recognize you as of yore
When I was Barr’s old corner store.