Fire destroyed Mr. Wm. C. Smithson’s bank barn, 10th line of Ramsay Township, on Sunday afternoon in a very short time. The barn and farm were leased to Mr. Kenneth Fee, local livestock dealer, and he lost 17 calves ready for market, a Hull valued at $250, four young pigs and about 20 tons of hay and baled straw .

Mr. Smithson lost about 30 tons of hay and all sorts of farming equipment that he had assembled since he moved to the farm on the edge of town from Pakenham 21 years ago. The horse stable, which was an annex of the barn, was burned with a large quantity of work and show harnesses, blankets, etc. The pump house which was separate also went up in the blaze. Five calves and a show horse were saved.

Mr. Smithson’ carried $2,000 insurance with the Lanark County Farmers’ Mutual and Mr. Fee had no insurance. The fire was first noticed about 2 p.m. by Gregory Smithson, 11- year-old son of Mr. and Mrs. Smithson, who was in the barn at the time with Donald Reynolds of Carleton Place. At that time the hay on top of the granary was burning and as the barn doors were open, the fire spread in a matter of seconds.

The Almonte Fire Brigade was called and a thousand feet of hose had to be laid from the High School and the pumper connected. It was too late to do much good but the firemen stayed on the job until 6 p.m. and poured water on the ruins. When Gregory gave the alarm, Mr. and Mrs. Smithson and their daughter, Mrs. Millie Stokes, were at home. Mr. Smithson rushed to the cow stable but was unable to enter because of the extreme heat.

Mr. Fee usually visited the farm on Sunday but on this occasion only arrived when the fire was nearly over. In addition to the stock in the barn, he had 24 milk cows which were out on pasture. On Wednesday, the remains of the livestock had been removed and buried but there was still a big job of cleaning up. Mr. Smithson plans to rebuild. It is estimated the total loss will run around $25,000.

1956, Thursday August 23, The Almonte Gazette page 8
William C. Smithson
Following a month’s illness Mr William Craig Smithson passed away in Ottawa Civic Hospital on Wednesday, August 15h in his 70th year. Born at White Lake, he was the son of James Smithson and his wife, Barbara Craig. As a young man he worked at Cochrane for a few years and then settled in Pakenham Township.

Twenty-four years ago he purchased the farm on the outskirts of Almonte on the 10th line of Ramsay Township where the remainder of his life was spent. He was twice married. His first wife was Isabel Raycroft and following her death he married Jessie Ethel Armstrong in 1937. Surviving are his wife, and three sons and two daughters, William of South Porcupine; Dorothy, Mrs Peer Larsen of Kingston; Mildred, Mrs Dick Kitley of Regina; Douglas of Braeside and Gregory at home. There are also three brothers; Tom, Indian Head; Chris, Arnprior and Richard, Pakenham.

The funeral was held from his late residence, Martin Street on Saturday afternoon, August 18 and was largely attended. Rev Wm D. Reid of Carleton Place officiated and interment was in the Auld Kirk Cemetery. Among the tributes to the deceased were flowers from Circle No 2 of Almonte United Church and the employees of the Rosamond Woollen Company. The pallbearers were: Messrs Ted Sonnenburg, Kenneth Fee, William Hanson, Garnet Potter, Orval Peaver and Herman Ziebarth.

The Lowry Barn on Highway 29

The Bank Barn of William Goth 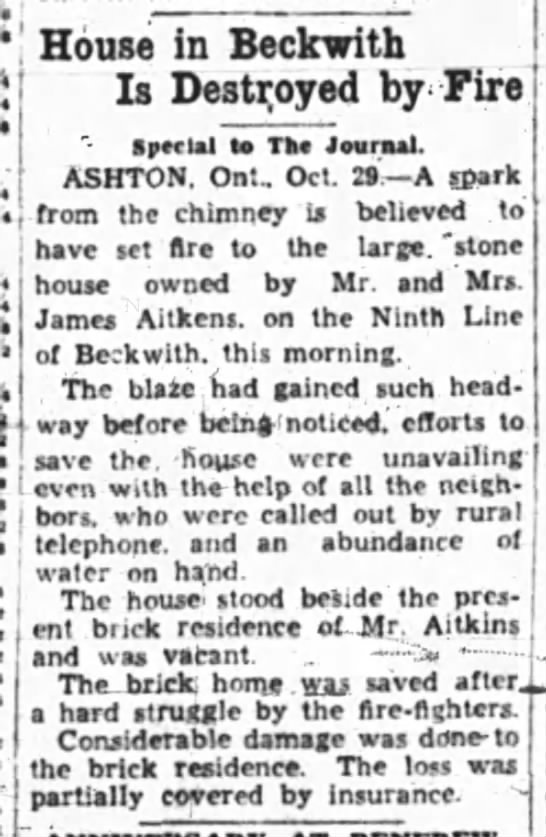 if you can identify any of these firemen let me know..

Come and visit the Lanark County Genealogical Society Facebook page– what’s there? Cool old photos–and lots of things interesting to read. Also check out The Tales of Carleton Place.Information where you can buy all Linda Seccaspina’s books-You can also read Linda in The Townships Sun andScreamin’ Mamas (USA)

The Rencraft Fire Dept Photo Brings Back a Familiar Name

Fire, Could End All You’ve Become — Photos of those that Protect Carleton Place

News of Butter– Fireman— and Women of Stamina in Carleton Place