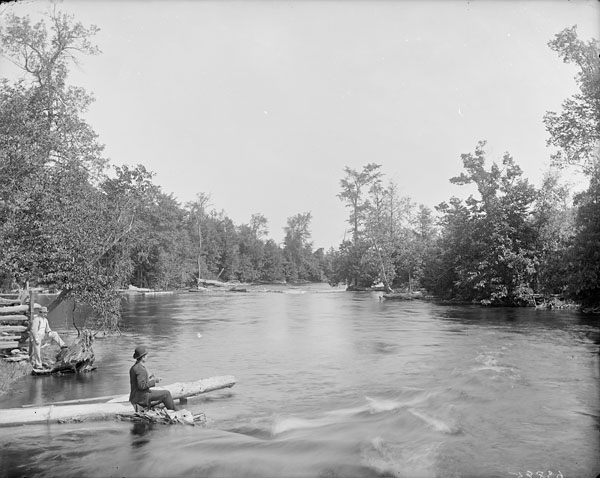 Along with Dr. Howard and a few other personalities in Carleton Place- Arklan Farm is on my bucket list of finding out interesting tidbits. Here is some more things I found today.

Through the years George Burgess had bought bits of pieces of land until he accumulated over 200 acres and began what he called: “an industrial or model farm of his own called Arklan”. In June of 1889  Mr. Burgess was noted in the Ottawa Journal for his stock of Jersey Cows and every October he would have an auction for jersey cattle and the folks would come for miles.

On Arklan Island he had  a sawmill where he cut all the lumber for building and fencing. Burgess also had a stable with some thirty head of cattle of very choice stock. He was also a horse enthusiast and along with Carleton Place’s very own Dr. Preston had an interest in  the “colt stake” and Arklan was also home to Dr. Preston’s trotters and thoroughbreds.  It was said there was no finer group of horse flesh than right in Carleton Place. He  told the journal he was surrounding his farm with wire fence and planting both maple and elm trees. 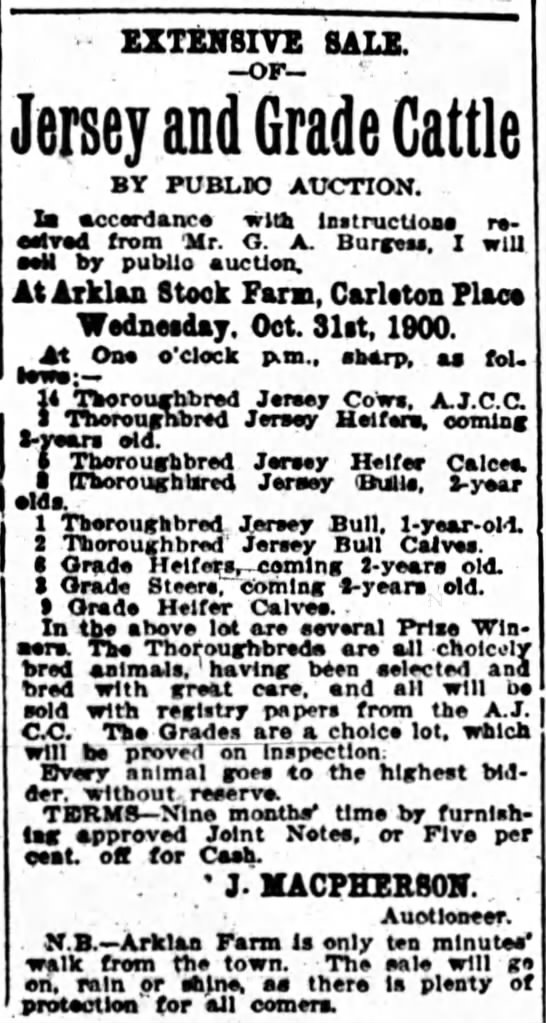 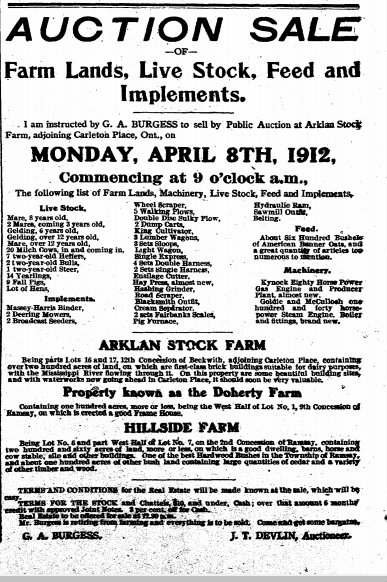 In 1912 he tried to sell Arklan Farm with J. T. Devlin as the auctioneer.

“The sale at Arklan on Monday gave astonishment to Mr. Burgess—it exceeded his calculations, the crowd was the biggest at any sale in years– tramp tramp a tramp, the farmers are marching all morning. At noon the multitude was served refreshments bearing the genuine Burgess signet, which is the seal of supremacy. Mr. Devlin rang up his voice at 10 am and did not stop until 5 pm.

The Arklan Farm nor the Doherty farm did not get a bidder, but the Hillside domain went over to Mr. C. F. Burgess. All the minor stuff advertised was sold at good prices, a vast quantity of machinery, harness, wagons, etc., cattle, and so on— with a sense of relief going wave like over the soul of the owner as he saw the encumbrances moving off in glad hands. Burgess still had enough equipment to make the Arklan and Doherty farms earn their living in good shape”.  April 12 1912

In 1921 Mr. G. Arthur Burgess announced a big sale of stock and implements at Arklan Farm on the 5th October.

Several piles of lumber caught fire at the Arklan Saw Mill, about a half mile from Carleton Place. The origin is unknown and it had gained considerable headway before it was noticed.  The local fire brigade was called and with the water supply on Arklan the fire was soon under control- Mr. E.M. Baker Proprietor of the Arklan Mill is covered by insurance.

A very interesting wedding took place on Monday evening at 8.30 at the Arklan Farm, when Miss Sadie Foster MacDougall, only , daughter of Mr. and Mrs. John MacDougall, was united in the bonds of holy matrimony to Mr. Frederick Nelson MeNeely, son of Mr. and Mrs. Alex S, MeNeely, of the 7 th Line, Beckwith--ALMONTE, ONTARIO, FRIDAY, AUGUST 15, 1924 –Almonte Gazette

Arklan refers to the vicinity immediately east of Carleton Place, ON and includes an island. This island was formerly utilized as a water power site and was first called Bailey’s Mills, then Bredin’s Mills and later Arklan Mills.

Land in this area was purchased by A. C. Burgess and his brother, G. A. Burgess (who was the mayor of Carleton Place in 1903 and 1921). The name Arklan was given to this property by G. A.

G. A. Burgess also started a dairy around this time but since there was already a Lanark Dairy in existence, Mr. Burgess called his enterprise – Arklan Dairy (the last three letters of LANARK placed at the front!). This little twist of fate solved Mr. Burgess’ problem back then and at the same time created a much sought after milk bottle for modern day collectors.

Dairy bottles especially ones with colourful silk screening on them continue to be popular with collectors although their container cousins: earthen stoneware and redware today rule the roost in terms of highly sought after objects.

Thanks to DM for bringing this example of a very interesting piece of Ottawa Valley history to our recent Club meeting.

Tales From Arklan –The Midnight Heist

Photo seen at a local auction last week. The final destination to Ottawa down the Ottawa River logs-no date

Back History of the Canada Lumber Company

1887 – Peter McLaren sold his lumber mill properties at Carleton Place and upper Mississippi timber limits at a price reported as $900,000.  The buyers, the McLarens of Buckingham and Edwards of Rockland, formed the Canada Lumber Company.  It doubled the mills capacity, with Alexander H. Edwards (1848-1933) as manager here.  Peter McLaren three years later was appointed to the Senate, and died at age 88 at Perth in 1919. 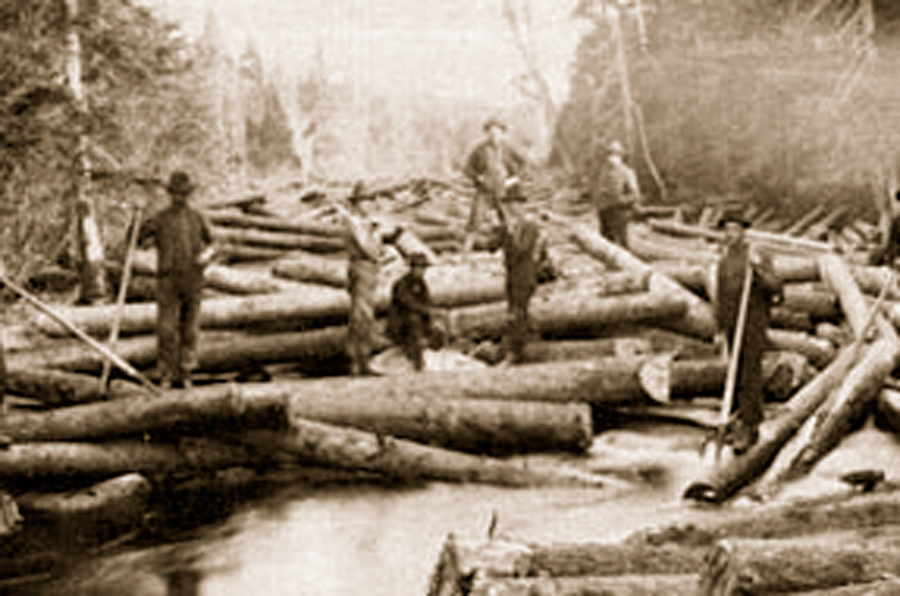 Rafts of logs down the Mississippi to Mills at Carleton Place. Photo-Perth Remembered

Almonte Gazette 1899— From a Herald Extra dated 18th inst., we learn the particulars of a fatal accident that happened at Carleton Place to a man named William Horricks of the Township of Drummond where his wife was at that time visiting.  The deceased was a married man about 35 yeas of age.

The Extra says:  “About 11:00 this morning (Tuesday) a terrible accident occurred in the lumber yard of the Canada Lumber Co. in Carleton Place whereby William Horricks, an employee of the company, lost he life.  The particulars are as follows:  two lorries heavily laden with lumber were running downgrade of the yard.  Horricks was in between the piles and wanted to cross the tracks and as soon as the first car passed he rushed out not knowing a second car was coming.  When on the track the second car struck him knocking him down and passed over him causing such serious injury that the unfortunate fellow only lived a short time.”

Site of Canada Lumber Co in 1910 in Carleton Place

Almonte Gazette–1925 A drive of logs is being brought down the Mississippi River from its headwaters. The logs are being taken to Arklan, about a mile below Carleton Place. Mr. Baker is in charge of the drive, he having recently purchased the water power at Arklan from Mr. C. A. Burgess of Carleton Place. The logs are causing some temporary inconvenience to residents of the town who have pleasure craft on the river.

You Don’t Waltz With Timber on a Windy Day

Tales From Arklan –The Midnight Heist