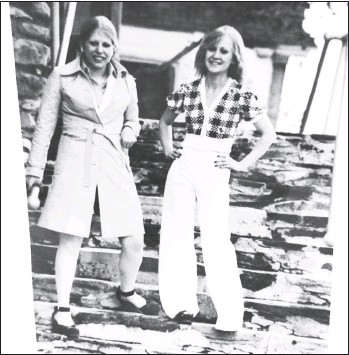 Linda circa early 70s  in Sherbrooke, Quebec when she was manager of Le Knack at Au Bon Marche.

I stopped celebrating New Year’s Eve during my seventeenth year on this earth. That year was so traumatic it cured me for life of participating in any future celebrations. Well, maybe I did do a brief stint in my nineteenth year and it was exactly thirty three minute participation and no more than that. That was the actual time it took to jam eleven people into a Mini Austin. It was snowing hard that night and people did need a ride home.

For approximately four years in High School I loved a boy and he was no ordinary boy. He was “The Golden Boy of Cowansville High School”. He was blonde, French Canadian and handsome as all get out. When he smiled, you could see the stars glimmer from his teeth and when he walked down the hall girls melted into puddles. Of course I had no chance of ever snaring this magnificent creature as I was about 102 pounds overweight. I smiled, I curled my hair, I used deodorant and he would never ever look my way. I was so huge he probably thought I was a school corridor column and not the girl that loved him.

At age sixteen I left school, went to Fashion Design School and all thoughts of Golden Boy left my head. I worked part time in a fashion store, lost about a zillion pounds and had the wardrobe any mod in the 60’s would die for. That was probably one reason I lost so much weight. It was either food or clothes and the clothes won out hands down.

So before the year 1968 ended, it found me holding an invite to the coolest New Year’s Eve party around. It was to be held in the basement of an old A & P store in Granby, Quebec and I knew my old school chums would be there. I was so excited to see them and dressed very carefully. I wore a black velvet “Twiggy” mini dress with a front zipper and white collar, black fishnets and patent cuban heel shoes with a big silver buckle on them.

As I walked down the stairs and into the make shift teen club people’s mouths dropped and screamed when they saw me. Taking off my long black Dr. Zhivago style midi coat carefully I slowly walked up to the dance floor in all my glory. I happily danced my feet off to a half dozen Creedence Clearwater songs until I was a sweaty mess. To cool off, I went outside to get air and of course icicles started forming on my hair from the cold frigid air.

I don’t smoke so I tried to lean against the brick wall seductively while the icicles were quickly multiplying in my hair. Maybe this year I could honestly snag a guy to dance with me. I prayed silently, “Just this once God, before I die, let me dance with a real boy.”

Through the haze of cigarette smoke clouds and ice fog I saw a shadow following me. He was tall lean and boy was he blonde. Yes, dear readers it was none other than Golden Boy. Golden Boy in all his glory was approaching me from 30 degrees north.

Illustration from the East Bay Express they did for my story

The icicles in my hair suddenly started to melt and I became tongue tied as he looked at me and then hugged me. I just couldn’t savour this moment I had yearned for as I was too busy worrying if I stunk from perspiration. He spoke in a low sexy voice that made the earth shatter and the heavens suddenly opened. My heart was beating on overdrive and I was about to explode as he said,

Wait, was he talking to someone else? I looked around and saw no one, so yes he was talking to me. More icicles started to melt from my hair as my body overheated. He grabbed my hand and we went inside where we proceeded to slow dance. I could feel his heart beat and we were so close I could smell his Aqua Velva and his Gitanes. We proceeded to dance the rest of the night away and he rode home with me in the bus holding my hand tightly. The heavy snow had turned to a deadly freezing rain but he insisted on walking me home.

We walked up the short path to the handmade death defying wobbling concrete steps that were now a skating rink. He took my head in his hands and kissed me. In fact he kissed me a lot. Yes, he kissed me so much he wanted more.

Instead of being in lust, angry thoughts suddenly flooded my brain of how badly he had treated me in the past. I suddenly started to rage that if I wasn’t 100 pounds thinner he wouldn’t be kissing me right now. In reality I was aiming for the snow bank on the right when I poked him hard,  but instead he fell down the icy concrete steps. Yes, the very same steps I had fallen down years ago and cracked my head open. Golden Boy lay there and was most definitely knocked out. In fact he was knocked out good and cold, like the freezing rain that was coming down quickly.

I called my father to drive him to the hospital. He was fine, except he had one problem. He was having a hard time remembering anything. Everyone blamed the slippery conditions and no one even thought that a former chubby stood up for herself that night. Yes, she had given her all for every other high school or college girl that had loved a Golden Boy once in her life and was treated badly.

So after that I never really celebrated New Year’s Eve again. I decided what happened that night was enough for me. I mean, you only get once chance sometimes in life, and that was it. So now every New Year’s Eve I celebrate with Dick Clark and remember. When I see his name pop up on Classmates.com, I smile. I smile that same sinister smile the night Golden Boy became not so golden and ‘slipped’ down the wobbly concrete stairs. I bet after forty years he isn’’t so golden anymore. Frankly I bet he is a tad tarnished.

Memories of that evening