Thanks go to Andrew Ritchie for these photos.

Hi Linda, I have some really good pictures of the opening,(1955) of Carleton Place Feed and Seed that my father owned (John and Sue Ritchie)–Mill Street Ritchie’s Feed and Seed. (Now Boulton Brown Condos on Mill Street).

On February 7, of 1970-a fire loss set at $100,000 gutted the mill house of Ritchie Feed and Seed mill in Carleton Place. Business was continuing as usual in the warehousing section of the mill which escaped the early morning explosion and fire. The 100-year-old mill,  was only partially covered by insurance and more than $40,000 worth of stock was lost in the blaze, along with milling equipment, and a 60-foot high grain elevator.

Howard McNeely centre and to his left is Andrew’s grandfather, Jack Ritchie

You just have to love this photo!!

My grandfather and my mother(Sue Ritchie) at the microphone,

Norma Jackson My Dad , Norman Clark, used to work at Ritchie’s Feed and Seed in that old mill. My sister and I often walked there after school and my Dad would sift through the seeds in his pocket to give us five cents for a chocolate bar

Mindy Merkley Wow, that brings back some memories! I wasn’t born when it opened, but I certainly remember running around that area as a kid, jumping off the steps etc. 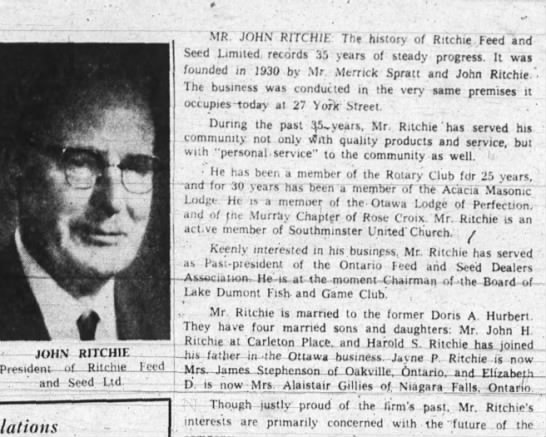 You can also read:

Down by the Old Mill Stream — Carleton Place

One of the Many Hauntings of Mill Street

Coleman Family History–Just for Your Records